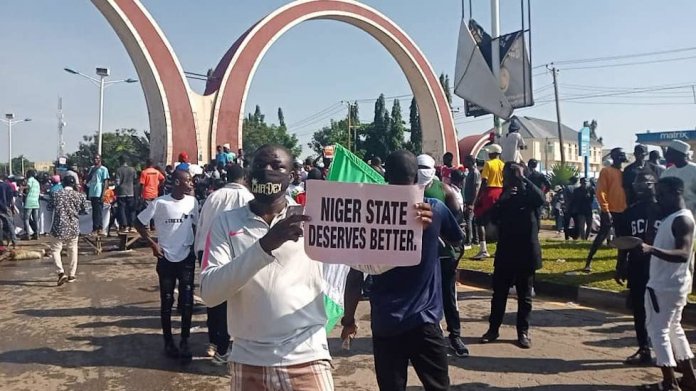 Vehicular movements between Minna and Abuja were obstructed for several hours on Monday as the protest by youths under the aegies of the Coalition of Northern Youth Groups entered its second day.

Many commercial and articulated vehicles coming from the southern part of the country and going to Abuja could not continue their journey through the Minna city gate while those traveling to Kontagora in the northern part of the state suffered similar fate.

Parents who had taken their children to school had to avoid the city gate area to return their wards home.

Hundreds of the placard carrying youths had blocked the highways as early as as 8am creating panic and confusion among the residents and travelers.

Like they did on Saturday, the protesters carried placards with the major caption being #Save Niger State” with riders such as “End banditry”, “End bad roads” “End “AEDC”.,” End Insecurity Now””End rape” “End Boko Haram.”

They said youths in the state had kept quiet for too long over what they called “decaying system” at all levels and vowed not to leave the roads until their demands were met unconditionally.

On the epileptic power supply in the state, the youths said the Abuja Electricity Distribution Company had subjected the entire people of the state to untold hardship for unsubstantiated excuses that consumers were not paying bills.

One of the leaders of the groups, Mohammed, while addressing the protester said: “it is unfortunate that despite the contributions being made by Niger State to the federal government, particularly the four hydro power dams situated in the state, the presence of the federal government has not been felt in our state.

“Power supply has been erratic, thereby slowing down economic growth in Niger State as youths who are into entrepreneurship cannot sustain their businesses”.

He therefore reiterated their earlier warning that if action was not taken, youths in the state will shut the three dams and block articulated vehicles from all federal roads in the state.

The protesters also said that corruption in the system had tripled in recent time, adding that “this is largely responsible for the hardship in the country”, hence the increasing level of insecurity all over the country.

Last week, the leadership of the protesters distanced their action from the #EndSARS protests going on in southern part of the country.