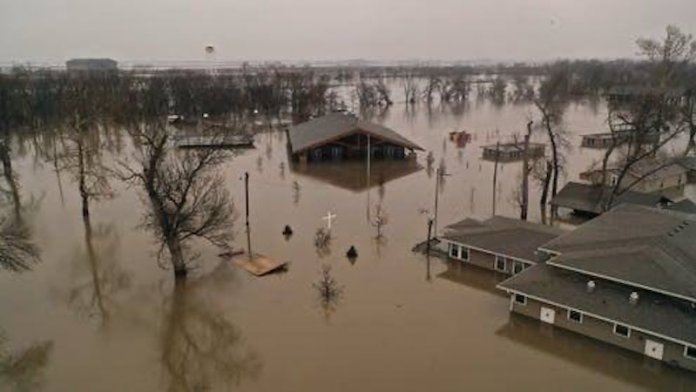 Chiemelie Ezeobi writes that as the River Niger gradually overflowed its banks, it submerged farmlands and homes in over 50 communities in Ndokwa East Local Government Area in Delta State, thus sacking residents and farmers from their homes and farms, respectively

For a community that lives in the riverine area and whose source of occupation is agrarian, this is definitely not the best of times for communities that reside in Ndokwa East in Delta State. When the River Niger slowly overflowed its banks, nothing prepared them for the level of devastation it would leave in its wake.

The flood from River Niger and its tributary, Ase Creek, submerged communities, farmlands, fish ponds, markets and crops. Soon enough, it spread its fangs to other Ndokwa East communities along Ase and Inyi Creeks.

Assessing the Impact on Communities

To assess the impact of the flood on communities in the Ndokwa East Local Government Area (NELGA), its executives set out on a fact-finding mission.

In continuation of other assessments done, the office of the Executive Chairman in conjunction with some past Chairmen of the LGA (Hon. Sam Chukwuji and Hon. Elder Chike Ugwumadu) recently undertook a trip across the LGA to assess the state of the flood. The communities covered included Aballa, Inyi, Onuabor and Utchi.

According to NELGA C/M, Juan Amechee Governor, after the assessment, in summary, “about 90 per cent of our communities have been taken over by the ravaging flood while almost 100 per cent of our community’s access roads have been cut off as well. In most communities along the Ase River and the Niger, it is a total displacement as all farmlands have been flooded. Even Ashaka is now an Island as all roads leading into Ashaka have been cut off by the flood. The situation is actually relatively close to what happened in 2012.

“The entire council premises at Aboh have also been submerged by the flood and even Ashaka where we thought will be safe has lost over 75 per cent of the town to flood. Consequently our earlier proposal to use the Ashaka Council premises is also no longer feasible because of the challenges of staff coming to work at Ashaka and considering the fact that most of our staff is also affected by the flood.

“Our offices will therefore continue to be on lockdown while we will be carrying out official duties on as need bases from our homes. We regret any inconvenience this action may cause us as we look forward to normal business as soon as the flood begins to recede and it’s safe to resume normal office businesses.”

Addressing the issue of the schools he said: “Our schools across the LGAs are also not spared as all the schools have been taken over by flood. Our children are therefore under compulsory displacement as a result of the floods.”

Word of Caution
Giving a word of caution he noted that, “at a time like, it is unrealistic to blame the government or other agencies for our plight, though we are very much aware that state government is putting measures in place to assist the LGA to manage the flood situation in absence of IDP camps.

“However, it’s not what government alone can do considering the level of impacts across the LGA. The LGA is even more handicapped based on the prevailing paucity of fund resulting from the refusal of key Oil and Gas companies in NELGA to pay tenement rate among other financial challenges faced by the LGA.”

Proffering Solutions
Moving to solutions, he posited that, “the truth is that we are in very hard times, considering what our people went through during the COVID-19 lockdown and the situation we find ourselves with the flood now. This is therefore not a time to sing about the problems but to proffer what we can individually or collectively do to ameliorate the suffering of our people and reduce the impact of the flood on their person.

“As earlier solicited, all community leaders, women, youths and other stakeholders are hereby encouraged to do everything they can to assist our people in our various communities in any measure we can (nothing is too small or too big at this time), help monitor and enforce all possible strategies in the communities across NELGA to ensure that no life is further lost during the flood season, having recorded one death involving a police officer few weeks ago and assist our displaced school children in one way or the other including but not limited to organising free lessons for the kids around us.

“We urge residents of the LGA, especially those in flood-prone areas, to take precautionary measures in respect of the flood alerts and press releases from us. Every necessary step must be taken to avoid any disaster while we do all we can to attract necessary intervention from all walks of life including state and federal government.

Safety Advisories
To minimise loss of lives, especially those making use of water transportation he said: “Referencing our earlier press release, water travel is still on the increase and we recommend that we all adhere to the water travel safety measures; avoid overloading; ensure you use life jacket during travel period; avoid low spots, like ditches, basements, or underpasses; do not walk through flooded areas; If you have to walk in water, wherever possible, walk where the water is not moving; do not drive into flooded areas; do not touch electrical equipment if you are wet or standing in water; know the weather; let your people know about any trip you are embarking on, before your journey, during the trip and post arrival. Put safety first after God in all you do now and going forward.”

He further charged the people, both individually and collectively, to take the flood advisories to heart and commit wholeheartedly to their messages, adding that “we are required now, more than ever before, to be our brother’s keepers among others requirements.

“It is even of paramount importance that our people should take necessary precautions during heavy rainfall or in the event of commuting. People still living in houses built along floodplains should be encouraged relocate to safer places, avoid the use of low bridges and culverts when the rain is persistent, and whenever there is rainfall, people should avoid staying under high tension electricity installations”.

Assurance
Assuring that the federal, state and local government, as well as all government agencies are working in collaboration with partners, he said they are doing everything possible to help the people stay safe and remain calm, adding that the situation at hand demands proactive response and collaborative effort on a daily basis.

Given the magnitude of destruction, the affected communities have called for urgent response from the federal and state governments, especially now that their sources of livelihood have been cut off by the flood.