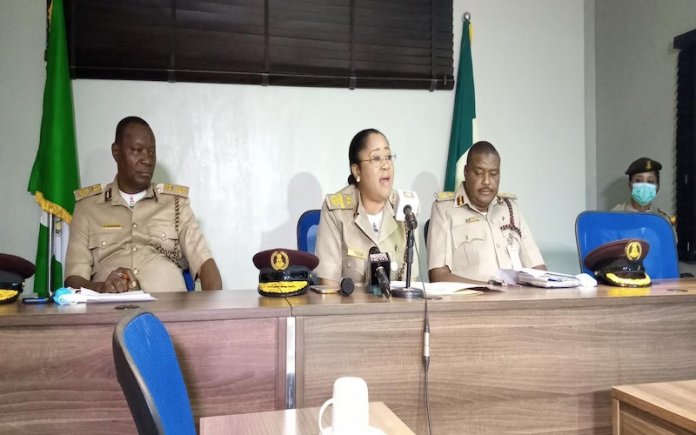 The Assistant Comptroller General (ACG) Immigration, Zone “A” Lagos, ACG Doris Braimah, has tasked journalists in the country on using their tools for nation building.

The ACG alongside the PCO, A.S. Garo and Mr. Fagbamigbe E.S, said this during an interactive session with journalists in Lagos where she spoke on, ‘The Power of Positive News in Nation Building’.

While describing the media as the most powerful in nation building, the ACG implored journalists on sincerity of purpose in the dissemination of information while projecting the image of the nation.

Listing media tools including, laptops, cameras, midgets, phones and pen among others, she said the message from the media should add value.

“Let us be patriotic as a nation. In my years of service I’ve seen how other people patronise their nations to make the nation great,” she enjoined the media.

According to her, there is need for patriotism. “In the past, immigration has partnered very well with the media. That is why I thought it was a very vital component of the service in terms of projection. So, that is the reason being on board the affairs of Zone A, I must continue with you in that light.”

She, therefore, declared the Nigeria Immigration Service (NIS) readiness to work with the media in projecting the nation in a positive light.

More so, during the course of the parley, the AGC clarified that there is no scarcity of e-passport booklets as being purported in the public while calling on passport applicants to stop patronising touts who bill them double the cost of passports.

Braimah’s words, “We don’t have scarcity of booklets, it is the touts who are behind the campaign in order to exploit unsuspecting applicants.”

This is coming after the media raised the issue on some touts exploiting unsuspecting applicants who want to acquire their passports.

She further described some applicants as lazy to follow due process, hence charged them to “log on to the website of NIS yourself, fill the application form and proceed to the passport office for the other processes”.

Braimah disclosed that NIS under the leadership of Muhammadu Babandede has improved its technology to expunge all interface with touts.

She harped on, “don’t patronise touts. Ensure you have your documents complete. Fill your form in the comfort of your home, come to the passport office, queue up and follow due process and you will get your passport.”

Hinting that the NIS has recorded giant strides under the Babandede administration, she listed the achievements as prompt payment of salaries, ease of doing business, building of Forward Operation Base in the states, 17 command buildings, creation of 76 visa categorisation, creation of comprehensive database for migrants, and the ongoing construction of data base collection centre, amongst others.

The ACG, who said the achievements of the NIS is under reported, also encouraged the media to be patriotic for the sake of nation building.