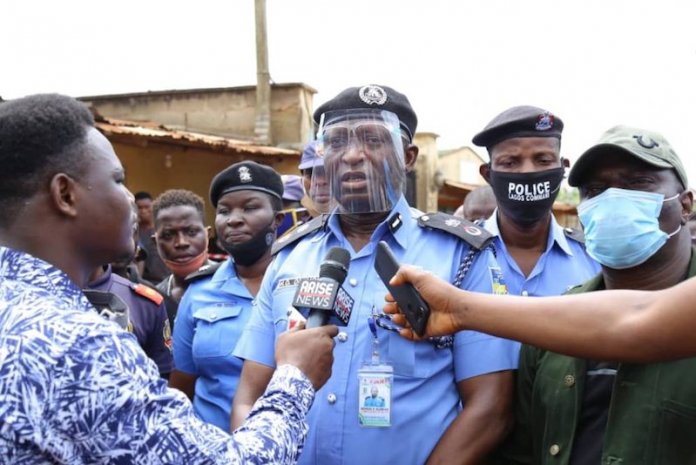 Amid sustained protest against police brutality nationwide, the Lagos State Government yesterday disclosed that with the support of the state police command, it had identified four police officers, who last Monday fired gunshots at #ENDSARS campaigners in Surulere, Lagos.

The state government, also, disclosed that the officers involved in the shooting “are undergoing orderly room trial,” and promised “to bring the full wrath of the law on the officers who perpetrated this irresponsible act.”

The state governor, Mr. Babajide Sanwo-Olu made this disclosure yesterday when he visited the widow of Mr. Okechukwu Iloamuazor, the driver hit by a stray bullet during the last Monday demonstration by youths in Surulere.

During the visit, Sanwo-Olu revealed that four police officers, who opened fire on the protesters in Surulere, had been identified by the state government and the police authorities.

According to him, the police officers are currently undergoing orderly room trial at the Lagos State Police Command.

He said the state government would take the officers’ punishment beyond the established disciplinary guidelines of the police.

He explained that the state government “will allow the police to complete their investigation. We will certainly take the case out of the police and bring the full wrath of the law on the officers who perpetrated this irresponsible act. This will be a clear signal for other trigger-happy officers.”

He commiserated with the family over the incident, which he described as unfortunate. He said the deceased should not have died under the circumstance, but assured the family members that the perpetrators would be brought to justice.

He said: “On behalf of the State Government, and the people of Lagos, I commiserate with the family over this mindless brutality that led to the death of your son. We condemn endless killing of innocent citizens to the highest level.

“It is highly disheartening to learn that the victim, Mr. Iloamuazor, was performing his legitimate duty when the unfortunate incident happened. He hurt no one to have been subjected to such painful death.

“Iloamuazor’s death is a sad loss not only for the family but to the entire citizenry that has clamoured for an end to police brutality. I assure you that his death will not be in vain.

“The case will not be swept under the carpet. This is going to be the beginning of real change that people want to see in law enforcement,” he said.

Also yesterday, Sanwo-Olu held a meeting with Justice Doris Okuwobi, the Chairman of the Judicial Panel of Inquiry and Restitution set up to investigate cases of brutality and human rights violations committed by operatives of the dissolved Special Anti-Robbery Squad (SARS) in the State.

The meeting, held behind closed doors, was attended by the Attorney General of the State, Mr. Moyosore Onigbanjo, SAN, Head of Service, Mr. Hakeem Muri-Okunola, and Commissioner for Information and Strategy, Mr. Gbenga Omotoso.

Sanwo-Olu said the meeting was necessary to intimate the panel chairman on new developments and expectations of the state government.

He said the membership slot reserved for the youth had been increased to two, saying the move was to ensure young people, who are mostly the victims of SARS brutality, had strong voices and contributions in the panel’s activities.

Sanwo-Olu said the panel “will commence its sitting next Monday after the official swearing in of its members in Alausa. We expect members of the public, who have complaints against SARS operatives, to approach the panel and bring forward their claims.

“I understand there is a process which the youth are using to nominate their representatives, which is very good. We will be expecting them to forward the names of their nominees to us before Monday.

“We believe that the increment in youth representation will further enrich the composition of the panel and diversity of the panel’s recommendations.”

Sanwo-Olu said the venue of the panel’s sitting was purposely chosen to create room for large occupancy should there be a high number of complainants. He said the help desk lines specifically created to reach the panel members would be opened for calls from Monday.

He urged members of the public who had valid cases of brutality, human rights violations and extra-judicial killings to approach the panel for justice and compensation.