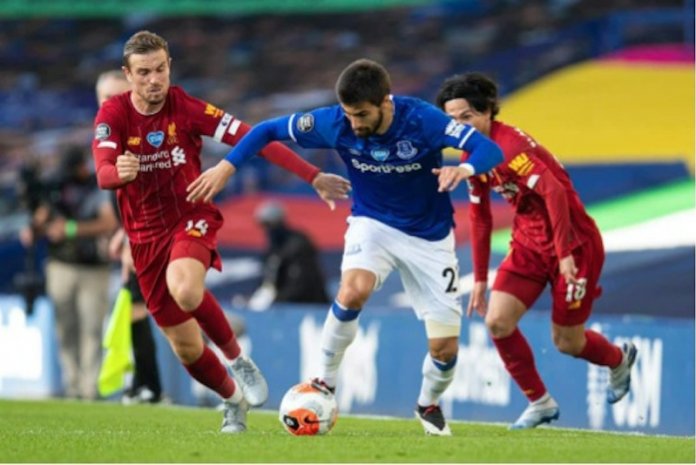 One of the talking points of the four-week old Premier League season is the sterling performance of Everton-winning their four matches to stay on top of the log. As club football return after the international break, Everton will be staking their perfect record against league defending champions and bitter rival-Liverpool, who were humiliated 7-2 before the break by Aston Villa and would want to put their league season back

The 288th Merseyside derby is shaping up to be one of the most fascinating in recent years as surprise early Premier League leaders Everton welcome champions Liverpool to Goodison Park lunchtime today.

Jurgen Klopp’s side make the short trip across Stanley Park looking to bounce back from their worst ever Premier League defeat, but they come up against an Everton side leading the way as the only team in the top flight to have won four from four so far this season.
It has been an anniversary-filled international break for Liverpool, who celebrated five years under Klopp last week and a decade of being owned by Fenway Sports Group on Thursday.

It is one of those peculiar twists of fate which football occasionally throws up that the Merseyside rivals should meet on exactly the same date one decade on, and that Everton will go into the match about as optimistic of victory as they have been at any other time during those 10 years.
Indeed, all of the usual measures point towards an Everton win – form, league table and momentum are among the factors firmly in the home side’s favour, which has very rarely been the case in the intervening decade.

Liverpool, as a club and a team, are undoubtedly in an immeasurably better position now than they were when they last lost the derby – they sat second from bottom of the table after that game – but the 7-2 humiliation they suffered at the hands of Aston Villa last time out saw them plunge to depths not even seen during the dark ages of Hicks and Gillett.

Panic will not be setting in quite yet, though; as long as Liverpool can make a swift return to winning ways then that result will go down as a freak aberration – an absurd and astonishing anomaly rather than an exposé of a glaring weakness for the champions and the beginning of their downfall.

In truth, it was probably somewhere between the two. The fact that Liverpool’s defensive strategy from front to back relies on a certain degree of risk is not new information, but never before has it backfired quite so brutally.

The stats make for grim reading from a Liverpool perspective; it was the first time they have conceded seven goals in any game since April 1963, and the first time the reigning top-flight champions have shipped seven in a league game since September 1953.
There is no doubting that it ranks among the worst results in the club’s long and illustrious history, and perhaps the most worrying aspect is that the scoreline did not flatter Villa either.

The Reds can bemoan some bad luck after conceding three goals via deflections, but it is no exaggeration to say that Villa could have – and probably should have – run into double figures.
Whether the international break came at a good time or a bad time for the champions remains to be seen, but Klopp will demand a response from his side regardless, most specifically in defence.

Only West Bromwich Albion have conceded more than Liverpool’s 11 in their opening four games of the campaign – their most at this stage of a league season since 1937-38 and a tally it took them 13 matches to reach last term.
Away form will also be a growing concern with the champions having now lost four of their last eight Premier League games on the road – the same number of defeats as they had suffered in their previous 46 such outings.

Another loss today would remarkably condemn them to consecutive Premier League defeats for the very first time under Klopp, but they could hardly face a more difficult test at this time.
While Liverpool have one of the worst defensive records in the league, Everton are the joint-leading scorers; while Liverpool’s recent away form is poor, Everton have lost just one of their 14 home games across all competitions under Carlo Ancelotti.

The omens certainly look good for the Toffees under their three-time Champions League-winning manager, having won their opening four league games for the first time since 1969-70 – a season which saw them go on to win the title.
Not since 1938-39 have Everton won their opening five league games of a season and, as fate would have it, their fifth game of that particular campaign saw them defeat the reigning top-flight champions.

You have to go back to 1894-95 – just two years after Liverpool were founded – for the last time Everton won their first eight games of a season across all competitions too, so their current run stands up against pretty much anything else in their history when it comes to fast starts.
The major question now is whether they have the prolonged consistency to mount a top-six or even top-four push this season.

Some have even suggested that, in a campaign which has already thrown up some barmy results, there could be an unexpected title winner, and Everton will consider themselves at the front of that particular queue at the moment.
The visit of Liverpool will be the stiffest test of their credentials yet, although they have already won at Tottenham Hotspur this season for their first victory over a ‘big six’ club since Ancelotti took over.

Perhaps the only concern for Everton right now will be a defensive record which has seen them fail to keep a clean sheet in their last five outings. However, with such a free-scoring attack – spearheaded by the in-form Dominic Calvert-Lewin – Everton have not been made to pay for any defensive lapses so far this season, netting 24 goals in their seven outings.

The form of new signings James Rodriguez, Allan and Abdoulaye Doucoure has only added to the perfection of Everton’s start, and all three of them have tasted victory over Liverpool more recently than Everton as a club have.
For Everton to sit top of the table heading into a league Merseyside derby is uncharted territory for all involved, though; that last happened in September 1989, when Liverpool went on to win 3-1 en route to winning the title.

It has been a distinctly ordinary start to the campaign for the hosts, who go into the weekend five points and 10 places behind their visitors on the table.
There was excitement amongst Arsenal fans from the moment it looked as though Arteta would come out from under Guardiola’s wing and fly the nest, and he certainly appears to have brought much of his compatriot’s mindset and success with him from the Etihad to the Emirates.

Indeed, Arsenal have looked more like the Manchester City were used to seeing than Man City themselves so far this season, and the Gunners know that victory today would leave them already eight points clear of the former champions.
Guardiola’s side have seen their air of invincibility slip and their record of one win, one draw and one defeat from three games this term makes for their worst start to a campaign since 2010-11.

City go into the weekend languishing 14th in the table and, while we are still some way away from being able to draw conclusions from the Premier League standings, they will know that another defeat this weekend would be another early nail in their title hopes.

Incredibly, today will be the third matchday already this season that they have started in the bottom half of the table – as many as they had in their previous 375 outings, or almost 10 seasons, in the competition.

Things could quite easily be worse too; Man City will consider themselves relatively fortunate to have come away with a point from their last league outing before the international break as they played out an encapsulating 1-1 draw at Leeds United. Their season-opening win at Wolverhampton Wanderers could have gone a different way had the hosts taken their chances, too.

As it is, Man City are now in danger of going three Premier League games without a win for the first time since April 2017, when incidentally the third match in that run saw them draw 2-2 with Arsenal.

The Gunners are a club City have enjoyed themselves against in recent years, particularly in the league, but Arsenal have every reason to be confident and may even look to the blueprint of how Leicester City humbled the hosts in their only other home league game this season.

Man City in danger of losing their opening two home games of a league season for only the third time in their history.

That has not happened since 1953-54, but there will certainly be more people fancying an away win or draw in this match now than there would have been at the start of the season.

Much of that is down to Man City’s own form, of course, but it also owes to a bright start to the campaign from Arsenal.

If Leicester’s win is the blueprint for success at the Etihad then Arteta may have to live up to his promise to venture from the traditional ‘Arsenal way’ when needed, although his record against big teams is already better than anything Arsenal have seen in recent years.