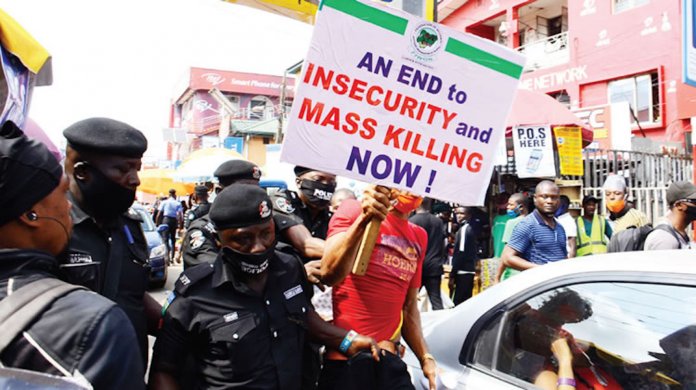 Barely four months after the Chairman of its Board of Trustees (BoT), Mr. Nastura Shariff, was arrested and detained by the police in Abuja for organising a protest over insecurity in Katsina State, the Coalition of Northern Groups (CNG), yesterday vowed to commence today a wave of marches in the 19 northern states to protest rising insecurity in the region.

The non-stop protests, according to the group, are aimed at drawing the attention of President Muhammadu Buhari and the 19 northern states governors to the plight of the region.

CNG said the ineptitude and an apparent failure of elected and appointed leaders from the North to either protect the lives and property of northerners or address the myriad distresses the region faced had pushed them to the wall.

Addressing a press conference in Abuja yesterday, the spokesman of the group, Mr. Abdul-Azeez Suleiman, said while the elected and appointed leaders of southern Nigeria were quick to identify with their people at the time of need, their counterparts from the north, including Buhari; the Senate President, Dr. Ahmed Lawan; senators, House of Representatives members, governors, state legislators and other government appointees abandoned the people in northern communities exposed to crime, insecurity and other violent crimes without any form of protection.

He vowed that the ‘#EndInsecurityNow protest’ will continue until their demands are met.

He said the coalition had followed developments around the bold and necessary steps taken by Nigerian citizens in some parts of the country, including some northern states to call attention to the deteriorating national security and other pressing concerns around the dwindling economy, prohibitive commodity prices, rising inflation amidst mounting poverty and prolonged stay at home by university students.

The CNG commended what it described as the progression of the citizens’ action that climaxed with government’s swift response to one of the concerns raised with the scrapping of the Special Anti Robbery Squad (SARS) and its immediate replacement with Special Weapons and Advanced Tactics Team (SWAT).

It, however, lamented that despite several protests and pleas by northerners, the authorities never deemed it fit to extend the swift spirit deployed against SARS into securing the north, or addressing the myriad distresses faced by northerners.

It pointed out that the sudden scraping of the FSARS has now created a huge vacuum in the fight against dangerous crimes that particularly threaten the very existence of most northern communities.

The coalition said while it welcomed the creation of the SWAT to replace SARS, it called for expeditious action for the improvement of the professionalism of the personnel to be drafted through reinforcement, retraining, equipment update and improved welfare.

It said it was imperative that henceforth, all formations of the SWAT be monitored by officials of the National Human Rights Commission and members of the Police/Community relations to forestall the FSARS breaches.

The group said: “We publicly condemn and pass a vote of no confidence on those office holders and elected leaders who have abandoned the bulk of northerners to the mercy of a vicious insurgency, destructive banditry, rape and sexual assaults, violent communal clashes amidst mounting poverty and entrenched fear of widespread kidnappings for ransom.”

It urged northerners, who would participate in the peaceful protest to conduct themselves peacefully, while urging the government to respect their rights to protest.
It said: “In the unfolding scenario, the CNG hereby inevitably arrives at the following observations and inferences:

“That the federal government appears not keen on resolving the lingering dispute with the Academic Staff Union to enable the recommencement of university education.

“In the light of the foregone observations, the CNG has no other option but to direct the extension of the protests to all northern states, commencing from Thursday, October 15, 2020.
“By this, all CNG state chapters and student wings are mandated to resume the mobilisation of responsible sections of the civil society, NGOs, women groups, professional associations, artisans and concerned parents in their respective states for the continuation of our protests started in Katsina State in June.”

CNG said it would lead the protest to: “Demand the federal government to immediately declare a state of emergency on security and take practical steps to end all manifestations of insecurity in northern Nigeria and other parts of the country.

“Demand thorough reorientation of the entire police force and its empowerment by way of additional personnel, modern training and adequate equipment to be able to reclaim its universal internal security function.

“Mount pressure on leaders to show real commitment to protecting the lives of citizens, ending the prolonged closure of our universities, reconsidering hiked commodity prices, reducing youth unemployment, and checking the rise in poverty level.

“To declare the agreement reached by labour with the government on new electricity tariff unacceptable and demand the immediate, unconditional reversal to the old rates.”