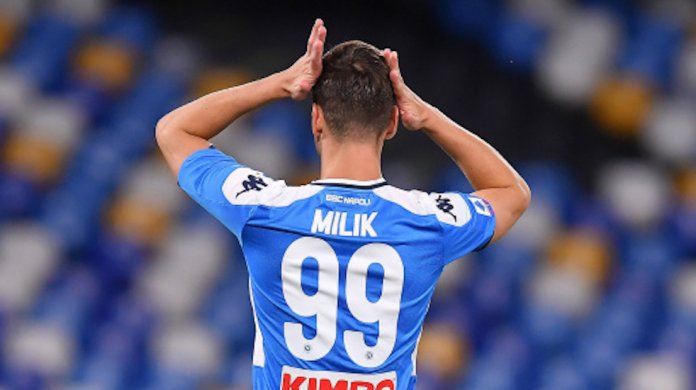 NapoliFC striker, Arkadiusz Milik, has said that he has not been treated well by the Neapolitan outfit after they failed to sanction his move to another club despite several offers from clubs.

He feels neglected leaving him out of Napoli’s squads for both the Serie A and the Europa League.

The arrival of Nigerian forward, Victor Osimhen, seems to have pushed the striker further down in the pecking order. Milik’s want a away move from the Italian side fell flat before the close of transfer window.

Unfortunately for Milik, clubs like Juventus, AS Roma and Tottenham showed interest in the Polish player but the club decided to retain him as a super sub forward which the player seems not to like.

The 26-year-old, however, would end up staying at Napoli despite admitting he had accepted offers from other teams. Milik has revealed he turned down the chance to stay with Napoli long term, with his current contract set to expire at season’s end.

“Napoli wanted to extend my contract for five years and gave me two choices: to sign or leave,” Milik told SportoweFakty. “I decided that I would like to try something else.”

“The life of an athlete is beautiful but short. I am 26 years old, I want to grow, to be a better player,” the striker continued.

“I think this is the right time to try a new challenge. There has never been hostility on my part towards Napoli. I wanted to solve everything professionally. I have great respect for the club, I spent four wonderful years in Naples. I respect Napoli, the fans. That’s what I decided. Right or wrong, but it’s my decision.

“I don’t want to name the teams that have contacted me, but the truth is that I had accepted some of the offers. But the teams in question never reached an agreement with Napoli and I had to stay.”

After his proposed move fell through, Napoli responded by leaving Milik out of their Serie A and Europa League squad. The striker was especially dismayed to find out that news from media reports rather than the club itself.

“I heard it from the press,” Milik said. “I expected this decision but the lack of communication from the club is not professional. I believe I haven’t been treated well.”

Milik has now been forced to train separately from Napoli with his only likely game action to come on international duty with Poland. All the striker can do now is wait until the transfer window opens again in January and find a new club then.

“I’m waiting for the next transfer window,” Milik said. “I hope the clubs reach an agreement at that point. I feel good physically, I have trained individually. I will play other matches with the national team. In three months my form will not suffer a lot. Where will I go? We’ll see.