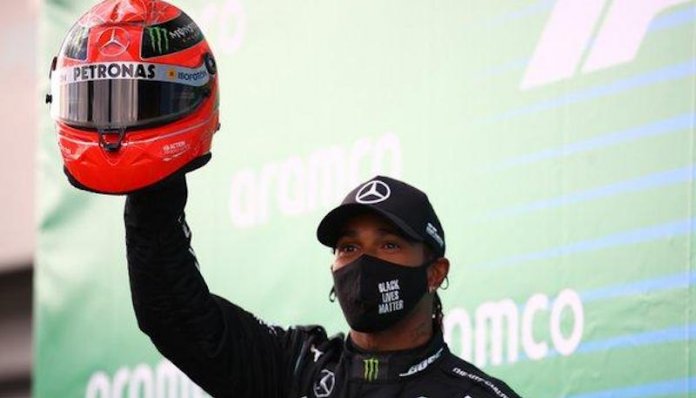 The Mercedes driver’s win was the 91st of his career and he will surely break Michael Schumacher’s record soon.

Hamilton extended his championship lead over team-mate Valtteri Bottas to 69 points after the Finn retired.

Behind Max Verstappen’s Red Bull in second, Daniel Ricciardo scored Renault’s first podium since returning to F1 as a constructor in 2016.

The race had been poised for a close fight between Hamilton and Bottas before the second Mercedes hit trouble.

Hamilton, starting second, made a better start than Bottas and dived for the inside at the first corner, pushing him wide, but Bottas held his ground and recovered the lead on the inside of the second corner.

That gave Bottas control of the race, but Hamilton pressured him hard and in the end the leader buckled.

Bottas handed the advantage back to Hamilton on lap 13, locking a wheel into Turn One and running wide, allowing Hamilton to close in and pass for the lead around the outside of Turn Two.

Three laps later, the race fell further into Hamilton’s lap when a virtual safety car allowed him and Verstappen to pit for fresh tyres and retain their positions ahead of Bottas, and two laps after that Bottas retired with a suspected failure of the MGU-H, part of the hybrid system.

Although Verstappen stole the point for fastest lap from Hamilton on the last lap of the race, Hamilton’s lead is close to three clear race victories with only six races remaining. A seventh world title – which would equal another Schumacher record – is beckoning.