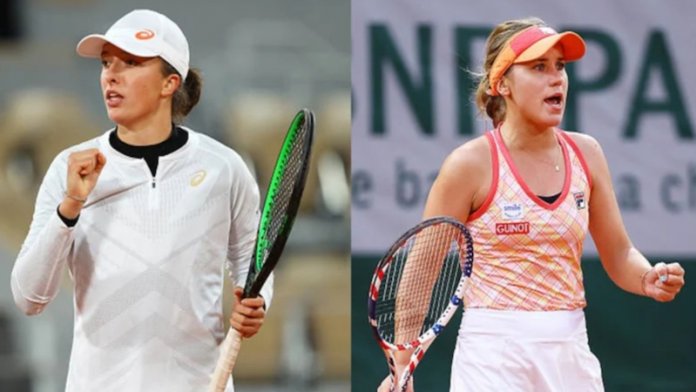 She has yet to play Swiatek on the main tour, but faced each other on the same stage in the juniors four years ago.
“I lost, but it was a close one,” said Kenin.
“Sofia is on fire this year,” said Swiatek after her win over world number 131 Podoroska. “I don’t want to think about it – I’m just happy I’m in the final.”

Having overwhelmed Romanian top seed Simona Halep in the fourth round, Swiatek will not fear Melbourne champion Kenin.
Kenin defended brilliantly against Kvitova and will have to produce a repeat performance against a Swiatek forehand which at times reached 80mph-plus against Podoroska. The teenager produced 11 groundstroke winners on that side, out of a total of 22. Podoroska, the first qualifier in the Open era to reach the French Open women’s semi-finals, also has a strong forehand side but was never given a chance to get into her rhythm.

The 23-year-old’s only bright moment came in the fifth game of the second set when she broke the Pole, although she needed four bites at it. Swiatek broke back straight away before serving out for victory at a cold and breezy Philippe Chatrier.

“I’m surprised,” Swiatek said of her run to the final. “But I always knew if I was going to reach a Grand Slam final it would be the French Open. It’s like a dream come true. “I wanted to play this match as if it was the first round. I didn’t want to think it was a semi-final because it would have stressed me out.”
Swiatek is only the second woman from Poland to reach the final at Roland Garros – the last was Jadwiga Jedrzejowska, who finished runner-up in 1939.

The second semi-final was a contest between an American player, who played a game of percentages and the Czech, who went for broke with her groundstrokes. Kvitova produced more winners (28-23), but also made more errors (31-20) than her opponent. The experienced Kvitova, a semi-finalist in 2012 who has never reached the final, was a double-break down in the opening set. She stated that she felt nervous before her quarter-final match against Laura Siegemund, and that appeared the case in the early exchanges on Philippe Chatrier.

The two-time Wimbledon champion got one break back in the sixth game, which featured one extraordinary moment when she turned her back to celebrate thinking she had won the point before having to react to Kenin’s shot that had crept over the net. She then had a second chance to break, but the Australian Open champion produced two brilliant serves to get herself out of trouble en route to taking the set.

A fifth opportunity to break the Kenin serve presented itself in the fourth game of the second set, but an error cost the Czech. A game later more errors handed her 21-year-old opponent break-point, which was taken with a forehand winner.

The 30-year-old finally broke back at a crucial moment, when nerves crept into Kenin’s game as she served for the match. But from despair it was delight as the American let out a yell when she broke back straight away, before finally getting over the line. “Petra is such a tough player,” added Kenin. “She’s got an aggressive game and a huge serve. I’m super proud of myself.
“It was a great match and I’m so happy.”

If Iga Swiatek’s victory over Simona Halep showed she can beat the very best, her two subsequent victories over qualifiers have proved she can also win when expected to. The 19-year-old said she tried to treat this semi-final as a first-round match. She was comfortably the better player, and is yet to drop a set.

Sofia Kenin’s movement and resilience stood out in her win over Petra Kvitova.
Kvitova paid for a very slow start, and Kenin dealt better with both the wind and the break points she faced.
The final feels too close to call, and that is despite the world number 54 coming up against the reigning Australian Open champion.