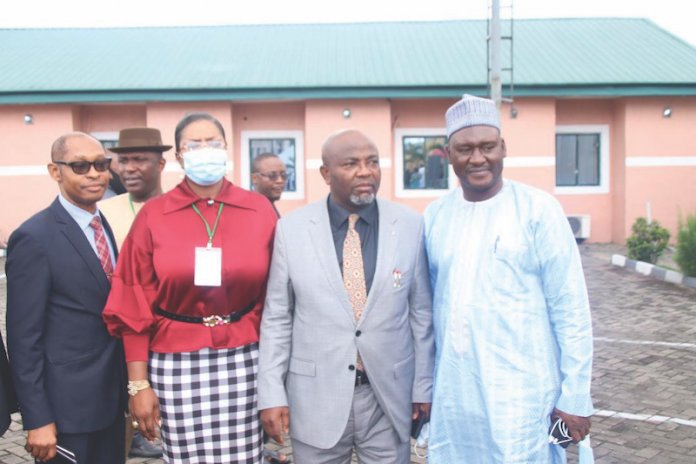 The Fiscal Responsibility Commission (FRC), with support from Civil Society Legislative Advocacy Centre (CISLAC) and Oxfam recently held a one-day retreat for FRC sub-national personnel with the aim of addressing policy and institutional framework for strengthening fiscal prudence, transparency and accountability within the framework of the Financing for development in Nigeria. Sunday Ehigiator reports

Nigerian Fiscal regime has been marred with lots of issues such as financial imprudence and malpractices by public institutions, both at Federal and Sub-national levels; the unbridled borrowing culture at all levels of government as well as incapacity of the regulator to use the big hammer of sanction to defaulters. To right the wrong and strengthen the problems that will awaken the stakeholders to their responsibilities, The Fiscal Responsibility Commission (FRC), with support from Civil Society Legislative Advocacy Centre (CISLAC) and Oxfam Nigeria held a one-day retreat for FRC Sub-National personnel. The retreat held on Wednesday September 30, 2020 in Port Harcourt, Rivers State paraded top government officials from the South-south geo-political zone as well as representatives from other states.

In attendance were chairman of the FRC, Victor Muruako; Executive Director, CISLAC, Auwal Musa Rafsanjani, the representative of the Country Director of Oxfam, Nigeria, Henry Ushie, among others.
The retreat aimed to identify gaps and institutional challenges, among other issues, that have weakened the capacity of the Fiscal Responsibility Initiative at the sub-national levels to effectively execute their mandates and harvest a robust agenda/recommendations for creating new and/or strengthening the various existing Fiscal Responsibility Commissions in order to effect beneficial changes in the fiscal management systems.

According to the organizers, the retreat became imperative because the FRC, which was set up by the Fiscal Responsibility Act (FRA), is charged with the mandate of promoting prudent and transparent fiscal management in Nigeria. But the current maladministration of public resources, incessant borrowings and consequently high debt profile, rising fiscal budget deficits, socio-economic decline and widening poverty and inequality are dividends of the extant fiscal responsibility framework and its prevailing deficits both at the national and sub-national levels. These framework deficits, funding gaps and a lack of institutional support, amongst other issues, have weakened the capacity of the FRC at both levels, to effectively execute its mandate.

In his opening remarks, Rafsanjani said: “We wish to chart a course on how to entrench accountability in the management of our public finance in Nigeria. We count it a commitment that your interest is in this; to have a framework, strategy and system which reduce the losses alleged in the country through public institutions.

“The FRC in one way or the other has a mandate to curb these menace that is not giving us the desired result in the acclaimed fight against corruption in Nigeria. We are here to educate ourselves on the reason why we should support and strengthening of this institution and also cascade it to our different states. This is the best way towards ensuring that our resources are prudently managed especially now that we do not have all the resources. It does not make any sense that we borrow recklessly and also spend recklessly; it is not in any way to our best interest as a country.”

In his welcome address, the Acting Chairman of the FRC stated that concerns regarding the country’s continuing challenge in mobilizing adequate revenue have made it imperative for a collaborative engagement of all stakeholders in fashioning out a way forward and proposing a better and more prudent management of the nation’s resources with a view to addressing macro-economic stability.

“The need for this interaction cannot be over-emphasized given the present tough economic challenges orchestrated by Covid-19 pandemic and also noting essentially that more than half of our national resources are expended at the States and Local Government levels.
“This retreat would take us through (a) an Overview of the Fiscal Responsibility act, 2007, (b) Accountability and Transparency within the Fiscal Sustainability Plan, (c) Strengthening States framework: identifying opportunities for collaborations, (d) Revenue Generation in the post Covid-19 economy and the Operating Surplus Template. States will also be expected to update on their respective fiscal sustainability plans.

“The retreat will also review the implementation of the FRA/FRL at both the federal and state levels with a view to adopting strategies on how to improve the implementation of Fiscal Responsibility law in their respective areas of jurisdiction. This is in a bid to completely draw a line from our ugly past.
“It is instructive to note that prior to the advent of the FRA, 2007 that Nigeria’s fiscal climate was marked by the absence of clear fiscal rules, uncoordinated fiscal relations between the arms and tiers of government, reckless borrowing and debt overhang, poor savings culture, disregard for transparency and accountability and corrupt practices, resulting in chaotic and unhealthy economic outcomes.

“In the last 11 years plus, the Commission has worked at putting these reforms on the right footing. This has by no means been an easy task. Our experience as a reform-implementing agency has demonstrated that much more than strong laws are needed if we must effectively break with the past habit of financial profligacy.”
While presenting a paper titled “Fiscal Sustainability Plan: Accountability and Transparency and Debt Management,” one of the speakers, Eze Onyekpere challenged government at all levels to “open up their books” if they had nothing to hide.
“We borrow without thinking of how to repay. We borrow based on political exigencies. We borrow to spend on unbankable projects,” he bemoaned.

He stated that the sub-national Fiscal Sustainability Plan (FSP) was designed as an economic and public finance management tool with key objectives of improving accountability and transparency; increasing public revenue; rationalizing public expenditure; improving public finance management and ensuring sustainable debt management, adding that publication of budgets, quarterly reports and other fiscal data will not only promote transparency in governance but also build public trust and understanding of the key fiscal challenges.

“The impression out there is that Nigeria is a rich country only burdened by its corrupt public officers, but this is far from the truth as the country is virtually dirty poor when compared with her peers. This public belief fuels the refusal to pay PAYE, grumblings about increase in VAT, removal of petroleum subsidy and introduction of cost reflective electricity tariff. Transparency will facilitate the drive to increase tax ratio of the GDP,” Onyekpere asserted.

While it has been observed that proper implementation of policy and institutional framework will strengthen fiscal prudence, transparency and accountability at the Sub-National levels within the framework of the Financing for Development (F4D) project, it was revealed that only 17 states in the country have a fiscal responsibility framework. However, the amended fiscal responsibility legislative framework which has been transmitted to the Finance Committee of the National Assembly since February, 2020, has the potential to address these fiscal policy and institutional gaps, drive revenue mobilisation and promote the prudent and transparent management of Nigeria’s resources, if enacted and implemented effectively.

At the end of the robust discourse, the following general observations were highlighted: That Local loans are collected both for capital and recurrent expenditures without particularly meeting the set requirements by the FRA 2007; some states have fashioned domestic fiscal responsibility laws that are not in line with the FRA 2007; some states have passed the law but are yet to establish their respective commissions while most of Nigeria’s budgets are on an IPSAS cash basis of public sector accounting as opposed to an accrual basis.,

Rounding up the retreat, two recommendations were proposed for both FRC and the states. It was recommended that the FRC should engage the National Economic Council and Nigeria Governors’ Forum on the need for the domestication of the FRA and the establishment of state commissions, engage the State Houses of Assembly on the relevance of a fiscal responsibility framework and advocate its domestication and effective implementation, embark on an intensive education and advocacy with relevant institutions (Private and public sector financial institutions) as regards states compliance with the provisions of the FRA on borrowing.

It also resolved that there should be framework that mandates the states to domesticate the FRA as a prerequisite to accessing the funding from the government-supported SFTAS programme and enforcement mechanisms should be put in place to mandate states to publish state budget online annually and budget implementation performance report online quarterly in accordance with the FRA.

For the states, it was recommended that there should be an urgent need to move from the International Public Sector Accounting Standards (IPSAS) cash basis of budget accounting to an accrual basis for public sector finance reporting, to include the major provisions of the FRA in their state FRA; specifically, to include capital provisions dedicated to projects, which should be backed up with an unbiased report made public, Periodic peer-review visits and trainings and sign on to some initiatives that promotes fiscal Responsibility like the Open Government Partnership (OGP) and establishment of registers for the disclosure of information on beneficial owners of all entities to improve transparency and accountability in governance.