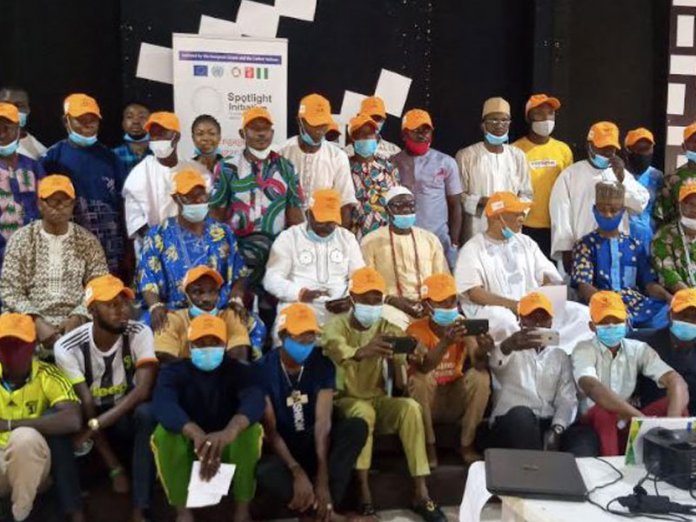 An advocacy group, Spotlight Initiative has begun its concept of establishing a network of men against Sexual and Gender-Based Violence (SGBV) to expunge the increasing rate of violence across communities in Lagos State among others.

The organisation visited communities including Iwaya, Makoko, and Adekunle in Yaba area of Lagos.

The programme had traditional leaders, religious heads, bales of the communities and young boys to serve as advocacy platforms to prevent violence against women in these communities.

Addressing the media, the Project Coordinator, Mr. Vincent Dania expressed that the communities were chosen for a number of reasons. Part of them is the prevalence of cases of violence against women in these communities and the fact that the traditional leaders were welcoming to work with Spotlight and put an end to the problem.

“There were several factors that contributed to SGBV. Most of the factors are attributing to poverty is the fact that when the family is port there is tendency they will be more exposed to violence. As you know, there should not be any reason for violence,” he added.

For Spotlight Initiative, initiated by European Union and the United Nations, SGBV is a direct consequences of gender inequality and the broader system of social injustice in Nigeria.

According to Dania, most communities are relationships are built on patriarchal values and a model of male power maintained through force, direct pressure, socialisation, ritual, tradition, law, language, customs, education and the gender diversion of labour.

In his perspective, the Lagos State Lead on Violence against Women and Girls, Centre LSD on the Spotlight Initiative project, Chukwunonso Ibegwam, bemoaned SGBV in the homes.

“The concept of SGBV is not something we should all be happy about firstly. I wouldn’t say my upbringing was very nice, it wasn’t so pleasant either. That has been part of my driving force to be able to move for the change.

While suggesting that the men should protect the women, who are sisters, wives and mothers, he noted that such attitude will create an enabling environment for the families and the society.

Hence to strike a cord, Spotlight Initiative designed a manual to empower boys and men who understand the nature and consequences of SGBV and Harmful Traditional Practices (HTP).

The manual alongside the programme is further on the quest to equip the men with the skills and commitment to lead the change needed to reduce and eventually eliminate these vices from their communities.

Speaking, the Bale of Makoko, Chief Raymond Adekunle, applauded the organisation for the initiative, saying it is good they are discussing it at this time.

“The root cause of SGBV dates back to how we relate with each other. These days the fathers are not even seen at home. They are elsewhere running after money. Mothers are not taking care of children. They too are busy chasing contracts. The children are on their own. By the time they both returned, they are stressed,” he explained.

According to him, governance itself should be able to make the country a sane society so that people are not unnecessarily stressed. “People are stressed economically, socially they cannot fit in.”