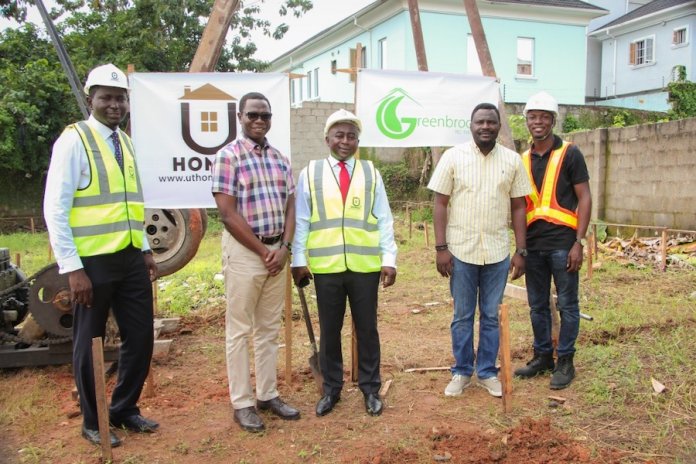 The Managing Director, UT Homes and UT Financial Services, Ade Adebajo has urged the government to adopt and encourage the Public-Private Partnerships (PPP) model in developing the nation’s housing sector.

Adebanjo stated this at the groundbreaking ceremony for the development of Bridgewater Apartments, a residential complex on Alfred Olaiya Street, Owuse Estate, Opebi, Lagos, recently.

Adebanjo said Bridgewater was conceived to increase the nation’s housing stock, stating that real estate companies could tremendously triple the growth already achieved in the industry, if the government made funds available at a cheaper cost.

He said they are engaged in various housing projects and that Bridgewater, which is built on 1705 square meters, has eight units of semi-detached contemporary four bedroom duplexes.

He said over decades, Nigeria’s population has continued to be on the rise, stating that if the government does not match up property development with the population, there would be more deficits in the housing sector.

“The federal and state governments should partner companies like UT Homes in developing the sector. We have partnered with another company on this project but there is nothing wrong with the government partnering with us.

“With such partnerships, we could actually build more expansive and large houses, especially the low-income ones, which the government workers and average teachers can afford to buy. This is one area that I am seriously encouraging the government to look into.

“We are here to serve the nation. We have the expertise and we run things. We need bigger lands and the support of the government. If they can do this, you would see that the housing deficit in Nigeria would go down a lot more.”

He said the development of the brand new eight terrace homes was a joint venture with GreenBrook Realty Limited, aimed at easing the challenges and reducing the deficit in the housing sector.

Speaking on the impact of COVID-19 on the sector, Adebanjo said although the pandemic hit Nigeria hard and might have made the government not to give palliative to companies in the sector, but that tax rebates from governments would go a long way in supporting them.

“Palliative does not mean that governments would have to give us money, but tax breaks and cuts would help alleviate the impact of the burden on businesses and help us build more houses, as the government cannot build the economy alone.”

In his remarks on developments in the sector as Nigeria marked 60 years, Managing Director, GreenBrook Realty Limited, Adebayo Ajayi, said there was still a huge housing deficit.

Ajayi stated this deficit as a reason for the vision to build affordable and valuable houses with topnotch quality for the masses, noting that the project was also an opportunity to give back to the nation.

He said, “The housing we have presently is not enough. We won’t wait for the government to do everything. As individuals, we all have our part to play. I don’t think the governments know that real estate can actually be maximised as a gold mine. I hope they would realise that there are so many opportunities for us as a nation if governments would raise investments in real estate.

Nigeria has about 200 million people and every weekend, even here in Lagos, a lot of people get married and there are not enough good and affordable houses for most of them. There is a housing deficit and governments should use this as an opportunity to make more money for our nation.”

According to him, if private companies could make enormous profits from housing development, then governments could do more, noting that it would give people the privilege to pay over a period of time, which would enable governments to make more money on yearly basis.

“We are looking towards the area of partnership with governments, particularly in getting approvals. It has been a bit stressful. They should make these processes easy and simple as these are key areas when it comes to housing development,” he said.