Nigeria’s real estate hubs are listed as Lagos, Abuja and Port Harcourt. Well, that was before The Plantation City, a well-coordinated community, evolved in Warri, Delta State. Bennett Oghifo writes

Nigeria has many sturdy and well-thought-out pieces of real estate that are comparable to those found in the technologically developed world, particularly in design and intelligence.

Most of these exquisite facilities are in Lagos, Abuja and Port Harcourt. Now, a premium real estate, known as The Plantation City, has interestingly put Warri in stiff contention, head-to-head, regardless of the security situation and banks unwillingness to advance loans to real estate developers outside Lagos and Abuja.

This fact is recognised, but did not deter the developers of The Plantation City, Delta Mega Trend Nigeria Limited, a privately owned company that specialises mainly in real estate development and civil engineering works.

According to the Chief Executive Officer of Delta Mega Trend, Mr. Sam Ogrih, an Accountant, who studied in Harvard School of Design, Smart and Intelligent Housing, construction of homes in The Plantation City began in 2009 with bungalows of two and three bedrooms. His knowledge of space management has been put to good use in rending the city.

The Plantation City is located in Otokutu off the Delta Steel Company (DSC) Expressway, Warri, Delta State. The parent company, Delta Mega Trend is riding on the success of The Plantation to begin construction at its other projects- the Southbrook Gardens, Warri Osubi Airport-Eku Road, Ugolo, Delta State; and a planned city project in Asaba, Delta State. Other projects of the company are Ivory Oak Apartments at Marshy Hill Estate, Lagos; Leawood Hotel, Lagos; See Events Centre, Lagos; and many other property developments across Nigeria.

The Plantation, as it is fondly called, is a complete city with provision for all house-types to suit the needs and wants of those who desire to live in the highly secure community.

Ogrih, who conducted a tour of the city, said it was a product of inspiration, stating that “an extraordinary dream attracted founders of The Plantation City to the expanse of land that has become home to the best residential estate in Delta State.

He said the dream city takes its inspiration from nature and provides excellent indoor and outdoor living experience for those who truly desire it.

Besides, it has added to the economy of Delta State and provides direct employment to 650 people daily, including artisans, plumbers, bricklayers and electrician, among others with unquantifiable indirect employment and good ripple effect in family circles.

The city has an independent power project (IPP), which the CEO said was procured at great cost, but that it was worth it, because they needed to keep the sanity and prestige of the city.

All electrical cables are passed through easily accessible conduit, and feeder pillars and meters are located where they could be reached by technical staff. Treated water is also supplied to all the homes in the estate, and reticulated through underground pipes.

The plantation is strategically located on a large expanse of land, a natural and serene environment where children are free to play in a safe, secured enclosed community, ride their bicycles, where parents and residents stroll around an extremely beautiful and peaceful, fully landscaped, green, clean and brightly lit environment, Ogrih said.

As done in every good project, The Plantation has influences from some equally sturdy developments in Lagos and elsewhere, like Victoria Garden City (VGC), and Northern Foreshore, among others. It also has its own artificial Lake, like Jabi’s in Abuja, which will be used for annual international fishing competition/festival with a winning prize of up to USD$50,000.

The Plantation City is split into commercial and residential zones, complete with a proposed hotel and a school for primary and secondary learners. It also has a shopping mall, fast food outlet, pharmacy, bank, a night club and lounge, as well as a play-pen sit-out area.

The Plantation City is planned on 120 hectares of prime land with only about 40 per cent built up and more people, within and outside the country, are taking possession of various plots to build their choice homes or to build for investment.

He said about three kilometres of fence work has been done and all the blocks used in constructing the buildings and interlocking stones used in paving the city’s roads are produced in a factory behind the mall. Regardless, subscribers have an option to buy these materials from two or three other producers recommended by Delta Mega Trend to maintain standards.

The city is built through venture capital and loan from a financial institution, he said, adding that it was usually not easy to get loans from banks for projects outside Lagos, Abuja and Port Harcourt.

The city is covered by certificate of Occupancy (CofO) and home owners are given Deed of Assignment.

The flow of the city begins at the main entrance which opens to the commercial area, the company’s office complex and a Police Station. A gate separates the commercial from the residential zone. The city has close circuit television covering everywhere. The entrance to the residential area can only be accessed by residents or their guests, who must be properly processed and cleared. Visitors cannot go beyond the gate unless their hosts inform the security and the gate is keenly watched through CCTV to ensure everything is done right, said the CEO.

Beyond this gate, it becomes obvious that homes in The Plantation are in different zones with various house-types that are built to specification by subscribers. Anyone that is not ready to build within the given time frame is relocated to ensure there is no gap between houses, said Agrih.

Immediately inside the residential area are a series of 2 and 3-bedroom bungalows with BQs and at the back of these are two Apartment blocks, consisting studio, one, two bedroom flats for rental purposes. Three more blocks are being built at this location.

Spread on the opposite sides of the bungalows are the semi-detached and detached duplexes and all buildings are fenced and separated with low perimeter walls and see-through gates.

Five sturdy homes of four bedrooms on three floors are being built at the Lake-waterfront, which is designed as an exclusive zone. A show house, which is almost complete, has a drive-in garage that links the kitchen and dining area (single flow), and on the first floor is the sitting room which has movie room and visitor’s toilet. The next floor has two bedrooms and the upper floor also has two bedrooms. They are all ensuite. Lighting in the home is controlled by body sensor.

On the southern part of the city is the Udu River where there would be a jetty and controlled entrance and exit points, Ogrih said. Indicating a large expanse of land being reclaimed, he said,

“I’ve cleared the back, I left over 200m from the river, so that becomes my security, I don’t need to put any man there, because you can’t pass through, but because we are in Warri environment, security is my number one priority.

“Eventually, I will create a channel from that place to come in and put a jetty and a control mechanism. You must enter through that channel. So, we must have security here because we will have boat for people, who want to enjoy that leisure, to ride out of this place.”

He said some homes would be built around an artificial lake to be created in the area and that they will sell at a premium. 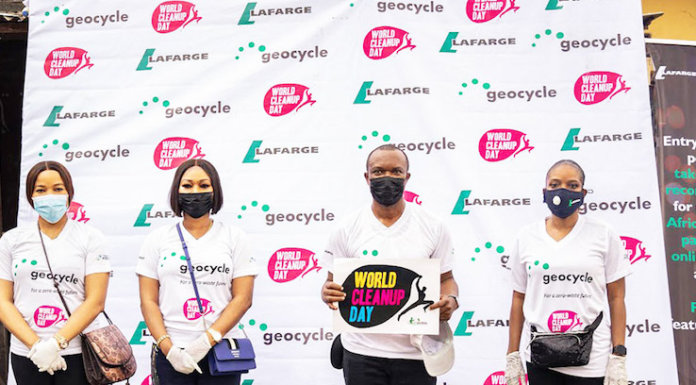