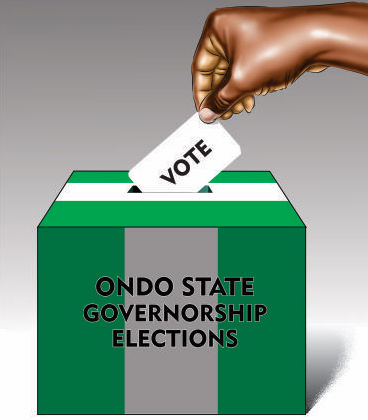 Ahead of Saturday’s governorship election in Ondo State, a group, Human Rights Forum, has accused the ruling All Progressives Congress (APC) of plannibg to convey thugs around the state pn election day in vehicles branded with INEC  stickers to hijack ballot boxes.
Human Rights Watch made this allegation in a statement released by its president, Dr. Emmanuel Akinnagbe, in Akure, the state capital, on Tuesday.
According to the statement, the said thugs have already been distributed across the state and given a mandate to hijack ballot boxes and replace them with already thumb-printed ones in favour of the ruling party.
The statement said: “The plan is that the thugs will move about in unmarked Hilux vehicles and the buses will then be used to snatch ballot boxes.
The group alleged that APC had connived with a ruler in Omifunfun, Idanre and claimed that he was the one harbouring APC thugs meant to snatch ballot boxes in remote areas.
“The thugs have also  been posted to Omifunfun, Okosun and Iramuje. The chairman of the party, Ade Adetimehin, is (allegedly) behind the distribution of thugs, with many of them in his house in Idanre.
“APC thugs have been posted to remote areas and as a vigilant and responsible organization, we cannot allow politicians to turn our state into a  theatre of war.
“ In Ikare, thugs have been deployed to Ala,  and in Ondo, they have been taken to Bagbe, Laje and other remote villages while in Owo and Ose local government areas, all the villages have been filled with thugs. The focus is to hijack ballot papers and exchange them with already thumb-printed ones. From the eve of the elections, they would be shooting sporadically into the air to scare away voters.”
The group therefore called on President Muhammadu Buhari and the international community to take note of the dastardly development.
According to it, the 1983 crisis that aborted Nigeria’s Second Republic started in Ondo State and Nigeria with all the security challenges facing it is now in a very precarious situation,  and could not afford fresh crisis.
“Nigerians must ask salient questions. How did APC thugs get INEC stickers? INEC must extricate itself from this web of conspiracy and demonstrate that the promise of free and fair polls on Saturday is not a fluke,” the statement warned.