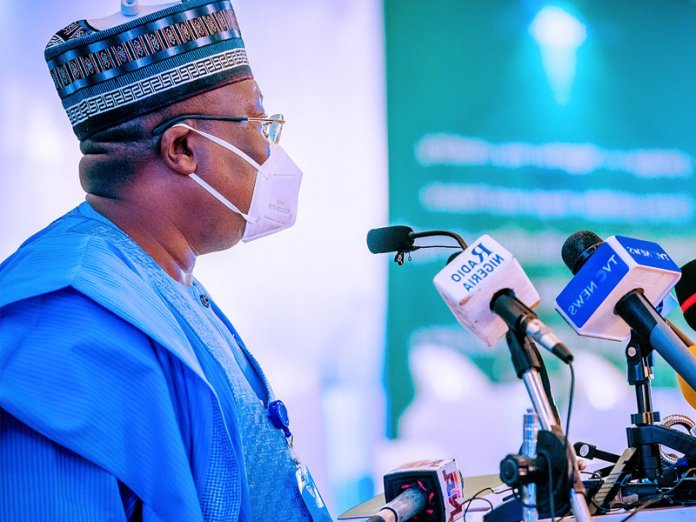 •Be patient with any legislation you have misgivings about, Buhari Urges

The President of the Senate, Dr. Ahmed Lawan, has said that the National Assembly would accept “rubber stamp” label if it would guarantee good governance for Nigerians.

Lawan stated this Monday at the two-day Joint Executive-legislative Retreat with the theme: “Promoting Effective, Legislative Partnership and Finding a Middle Ground,” held at the Presidential Villa, Abuja.

The Senate President stressed that the National Assembly decided quite early to work with the executive very harmoniously for the benefits of Nigerians.

He stated: “In fact, this relationship is misunderstood by many. Some out of mischief describe the National Assembly as rubber stamp, some out of misunderstanding. For us, what is outmost in our minds in the ninth Assembly is how do we work with the executive to make Nigeria better.

“If the price to pay is the names that we get, then let it be the price, because we believe that Nigerians deserve better service, better Infrastructure development in the country and it is difficult if not impossible in this country or indeed in any democracy without understanding and harmony in the way and and manner the two arms of government work.”

“So far, we have been doing this for over 12 months, so, it’s time to review this partnership and see the weaknesses in the relationship and the areas we have achieved so much and say this relationship has worked and have achieved some level of improved service delivery. There are a lot of rooms for improvement because, we believe we have not yet achieved that level of relationship that we can now say, it is good.”

Lawan added that this particular retreat would present opportunities to review and strengthen areas they have achieved so much and address areas where there have been weaknesses.

Speaking at the retreat, President Muhammadu Buhari urged the leadership of the National Assembly to be patient with any legislation or law which they have certain misgivings about and engage the process in line with democratic practices.

The President’s assertion may not be unconnected with the withdrawal of the controversial National Water Bill in the House of Representatives last week.

He added that the retreat was an opportunity to interface, brainstorm as a government, while also commending the leadership of the ninth National Assembly for the cordial and warm relationship in the last one year.

Buhari stated: “Let me also remind our common patriots, gentle men and women, that the process of lawmaking and governance are dynamic and ever evolving, I will seek their indulgence to be patient with any legislation or law which they have certain misgivings about and engage the process in line with democratic practices. Our interest is sincere promotion of our collective will and aspiration to build a nation where justice, peace, and progress are the norm.”

President Buhari stressed that by virtue of effective partnership between the executive and legislature, his government had initiated critical reforms targeted at reforming and strengthening the economy, increasing efficiency in governance, consolidating on the reforms carried out in the last four years and putting the country on a steady path of growth and development.

He added that the accelerated process of the 2020 budget and its review in the response to the coronavirus pandemic, the timely confirmation of his nominees and passage of critical legislations by the National Assembly were all testaments to the willingness and commitment of the legislative arm to play its part towards delivering effective services to Nigerians.

The President however said there was a compelling need to sustain and strengthen the partnership between both arms by creating platforms for regular dialogue, consultations and interactions, to share ideas and build consensus on critical governance and policy issues.

This approach, he noted, would enhance coordination within government and strengthen capacity to effectively address the challenges governance, service delivery and development.

The President said that he recently unveiled a nine point priority development agenda of his administration aimed at improving the livelihood of Nigerians within the next three years.

He emphasised that while all members of the executive council had been given clear mandates and yearly targets towards achieving the set indicators and goals, he recognised the critical role of the National Assembly in helping to deliver this agenda in the strategic role set by this government.

The President stressed that the developmental goal cannot be achieved without the support and collaboration with the legislature.

He said he was aware that both the Senate and the House had adopted the new Legislative Agenda for the current Assembly.

Buhari noted: “The urgent need to align the nine-point priority agenda and the legislative agenda of both the Senate and the House of Representatives cannot be overemphasized. I will therefore suggest that a Technical Committee be established after this meeting to harmonise this critical and strategic document to help improve synergy and coordination.

“To drive effective implementation of the resolutions or agreements reached at this meeting and achieve its main objective, I will also recommend the establishment of a Technical Working Group to synthesise the outcome and make appropriate recommendations for myself and the leadership of the National Assembly for action.”

On his part, the Speaker of the House of Representatives, Hon. Femi Gbajabiamila, said the engagement was long overdue, saying that he believes that the retreat would enhance the relationship between both arms of government.