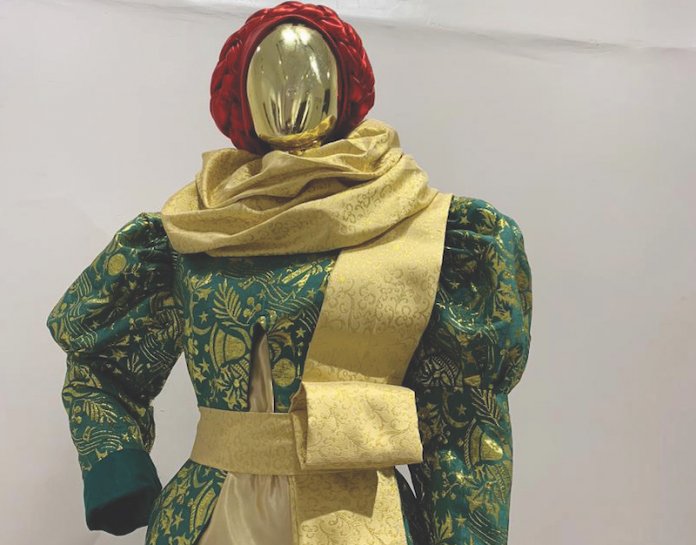 A commemorative exhibition, organised by the Lagos-based Terra Kulture in collaboration with the Federal Ministry of Information and Culture, seeks to reconstruct the Nigerian identity through the dress codes of its diverse cultural groups in the pre-independence years. Okechukwu Uwaezuoke reports

ARTICLES
With its lustrous cultural credentials, Terra Kulture seems best positioned – as the most appropriate Lagos-based venue – for the hosting of a commemorative exhibition on Nigeria’s diamond jubilee. And the idea of partnering with the Federal Ministry of Information and Culture for this landmark event distinguishes it from other independence-themed art events. As for the local aficionados and the cultural centre’s habitués, the exhibition – whose yesterday’s (Saturday, October 3) grand opening was strictly by invitation – remains open until Saturday, October 31. This is, of course, in addition to the fact that it already has regaled the megacity’s Independence Day revellers with a public preview on Thursday, October 1.

Titled Nigeria’s Journey: Cycles of Fashion, this is only the first among a series of multimedia visual offerings, which have been packaged by the cultural centre for this jubilee. These curated shows are supposedly meant to examine the sociocultural influences that have influenced – and still influence – the shaping of a national identity from the mosaic of cultural groups that make up Africa’s most populous country.
Its appropriation of fashion – defined by the free online encyclopaedia Wikipedia as “the social and temporal system that ‘activates’ dress as a social signifier in a certain time and context” – can easily be explained by its intrinsic association with culture. Hence, the sartorial tastes of Nigeria’s diverse cultural groups have become synonymous with their identities.

“Terra Kulture is committed to telling Nigerian stories and this exhibition affords another opportunity to do so,” says Mrs Bolanle Austen-Peters, the Terra Kulture CEO as well as the project’s executive producer. “Ours is a country rich in culture, and we are showcasing differing expressions of our culture through the evolution of our fashion. In this way, we invite you to don new lenses that allow us to see the metamorphosis of Nigerian fashion from the nation-state’s coming into being till independence. You will be immersed in an audio-visual experience that stimulates multiple senses, as we explore yet another facet of the Nigerian story, our Cycles of Fashion!”

Yet, such reenactments of Nigeria’s pre-independence history from 1900 to 1960 through its diverse cultural communities’ dress codes are usually fraught with nebulous glossing over of historical inaccuracies. An obvious reason for this is the fact that so much has been lost in the dark recesses of an undocumented past.

Take, for instance, the popular Igbo cultural costume, called “Isi Agu” (which translates as “leopard’s head”). It representation – or substitution? – with a garment adorned with the motif of roaring lion heads raises a question of authenticity. For the Igbo-speaking areas of Nigeria are primarily located in lowland forest regions of Nigeria, where lions are virtually non-existent. That is especially since these felines are known to hunt in grasslands and woodlands and not in rainforests.

Besides, the so-called “Isi agu”, whose popularity was only as recent as the 1970s, could not have been that widely-used among the Igbo people during the pre-independence years.
It is, of course, expected that the curators – Oludamola Adebowale and Yakubu Yahaya – could have factored in these concerns, among others, while putting together the month-long show. Yet, unearthing the diversity of the country’s cultural heritage through such a presentation has definitely been no cakewalk. Adebowale – described as “quite knowledgeable on Nigerian history and cultural heritage” – seems to be the more familiar name of the curatorial duo. As the show’s leading curator, he has been commissioned by the Ogun State Government to curate its 2019 African Drum Festival as well as by Chief Ebenezer Obey and the British Council. He also curated Timeless Memories: The Humanity of WS, an exhibition whose opening coincided with Professor Wole Soyinka’s 86th birthday. As his co-curator, Yahaya reminds the viewers that this exhibition is a part of a series, which coalesce into one pictorial cultural story of Nigeria.

The exhibition, which will be open daily between 10 am and 7 pm until its conclusion at the end of the month, is being supported by the Federal Ministry of Information and Culture, ECOBANK, The History Studios, Guardian Life, Abiola Philips and ASIRI Magazine, The BEAT 99.9 FM, Classic 97.3 FM. In his endorsement of the exhibition, The History Studio’s Timi Onibon says: “As we define ourselves as a people and continue to introduce ourselves to the world, understanding who we were and are gives us the tools to tell our own true and authentic stories. Cycles of Fashion is the first in a series of exhibitions by Terra Kulture and we at The History Studios are excited to be supporting this effort.”

Somehow, this endeavour chimes in well with the Terra Kulture’s profile as an educational and recreational organisation set up to promote the richness and diversity of Nigerian languages, arts and culture. The venue – which though was established in 2003, but started operations in 2004 – is undisputedly the city’s main cultural hub. For it has not only hosted several art exhibitions but also stage productions and book readings, among other events.