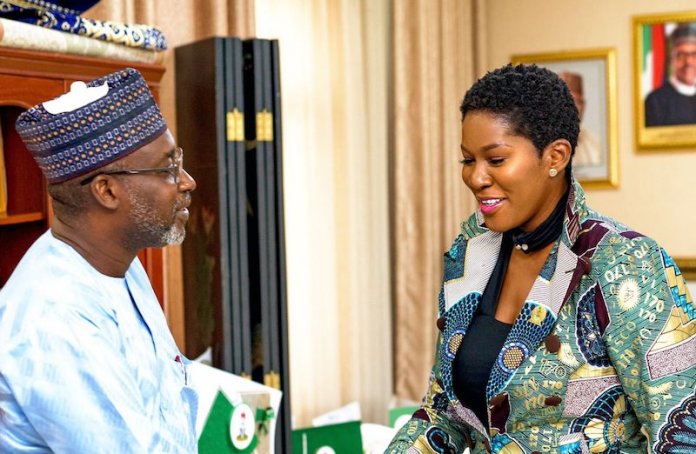 Vanessa Obioha
Four months after she launched her ‘Hygiene First: My New Habit’ campaign, Nollywood actress and filmmaker Stephanie Linus has been appointed as the
National OPS-WASH (Organised Private Sector in Water, Sanitation, and Hygiene) ambassador by the Minister of Water Resources, Suleiman Adamu.

The award is the highest form of recognition given to anyone in the private sector by the ministry.
At a recent ceremony in Abuja to recognise the actress’s role in inspiring improved personal and community hygiene, the minister applauded the efforts of the actress hygiene campaign while charging her to inspire behavioural change among Nigerians to take responsibility for their environment.

Linus launched the campaign in May to awaken consciousness about personal and community hygiene in the country.
“We want people to pay better attention to the habits that affect our health and environment and make better choices. It starts with our behaviour. We want everyone to know that the cleanliness of our environment is not someone else’s responsibility.

“It is our collective responsibility as Nigerians to put in the work and achieve clean and healthy communities that we’re all proud of,” she told THISDAY during the launch of the campaign.

In her new role, the producer of the award-winning film ‘Dry’ promises to challenge Nigerians to make good hygiene a culture, as well as inspire citizen participation and responsibility.

Also present at the ceremony was the National Coordinator for OPS-WASH, Nicholas Igwe, who lauded the involvement of the entertainment industry in the WASH sector towards creating behavioural change.