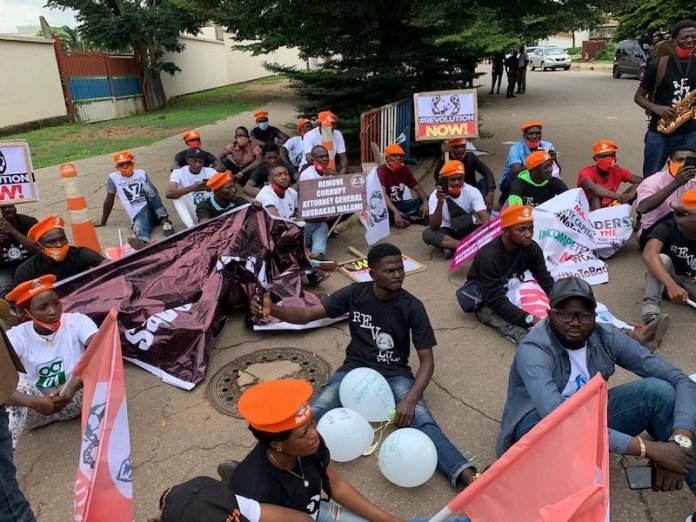 The Lagos State Police Command has arrested 30 protesters barely 12 hours after the state Commissioner of Police, Mr. Hakeem Odumosu, charged police personnel to disallow any rally or protests on October 1.
Odumosu has also ordered the detention of one Inspector Adadu Innocent for brutalising a photojournalist, Kayode Jaiyeola, of The PUNCH.

However, despite Odumosu order banning protests, protesters, under the aegis of RevolutionNow, hit the streets of Lagos yesterday to demand a better Nigeria.
Odumosu, during a security meeting with area commanders, divisional police officers and heads of units, had also warned parents and guardians against allowing their children and wards to participate in any rally, protests or wage war against the federal government.

He further warned that parents or guardians of any youth arrested for such act will be prosecuted.
But the protesters disregarded his warning as they trooped into the streets of Lagos, demanding a better society and an end to bad governance.
In response, police operatives who were deployed to maintain the peace arrested over 30 protesters, injuring some in the process.

During the demonstration, which started at about 9a.m, the protesters took off from Ojota and marched on Maryland singing solidarity songs.
They dressed in orange and green colours and carried placards with various inscriptions that reflected their grievances with the state of the nation.

However, the police disrupted the protest and arrested some of the participants.
Confirming the arrests, the Lagos State Police Public Relations Officer (PPRO), Muyiwa Adejobi, a Superintendent of Police (SP), said the protesters were arrested for unlawful assembly and conduct likely to cause breach of public peace.

He said: “The Lagos State Police Command has arrested 30 protesters at various locations within the state for unlawful assembly, conduct likely to cause breach of public peace and other offences, including violation of COVID-19 protocols/laws in Lagos State.
“The arrested individuals, who put on crested vests of #RevolutionNow with placards, will be charged to court on Friday, October 2.”

Reacting to the case of the injured photojournalist, whom a police officer broke his head with a baton, Adejobi said the officer responsible for the assault has been detained and awaiting orderly room trial.
He said: “The CP, who was monitoring the deployment and operational activities of officers and men of the command for the enforcement of the order against unlawful gathering and protest by some unpatriotic individuals, raced to the scene and personally moved the injured journalist to the Police Cottage (hospital) at Area F, GRA, Ikeja.

“He personally waited and ensured the injured journalist was given immediate and best medical treatment.
“The preliminary findings carried out by the Commissioner of Police and eye witness accounts from senior officers on ground, revealed that the cop suddenly attacked the journalist, without any previous altercation or confrontation.

“This propelled the Commissioner of Police to order for his trial in order to serve as a deterrent to others who are fond of engaging in unprofessional and unethical conducts.”
Earlier in a press statement where they called for nationwide protest to register their grouse against bad governance, the Coalition for Revolution (CORE), the organisers of the #RevolutionNow protest, had demanded the reversal of “anti-people policies implemented by the President Muhammadu Buhari-led administration.”

The group, led by a former presidential candidate, Omoyele Sowore, said: “These harsh policies that have bored a burdensome hole into the pockets of the Nigerian people are coming at a time when citizens are recovering from the adverse effect of the COVID-19 pandemic, a global health crisis that was also mismanaged by the Buhari’s government, further plunging already struggling citizens into deeper financial problems.

“It also comes at a time when there is an unprecedented dictatorial-style crackdown on free speech, dissent, activism, journalism and the right to associate and congregate peacefully and protest.”
The group also demanded the reversal of the hike in the price of petrol, the sacking of service chiefs and an end to “state-supervised and approved impunity under the watch of President Muhammadu Buhari.”