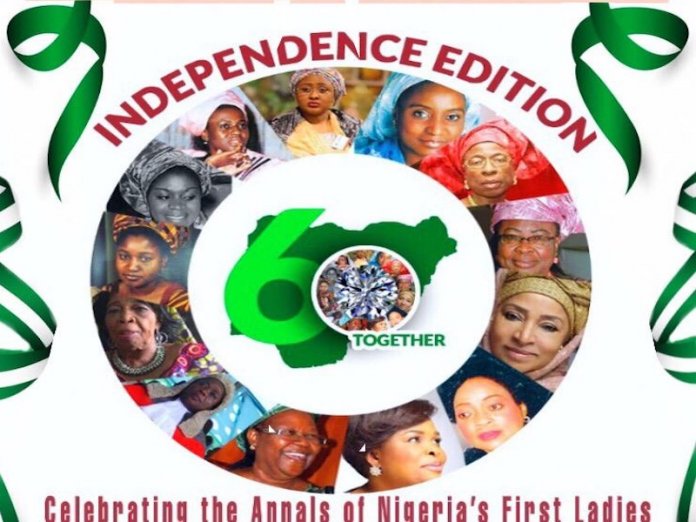 When the annals of Nigeria are pored over, accolades or vilification often trail the leaders who have either marred or made this nation into what it is today. However, little is said about the women who held the forte for their husbands in various capacities, especially in nurturing the home front. To mark the 60th anniversary of Nigeria’s Independence Day, Chiemelie Ezeobi and Rebecca Ejifoma profile these First Ladies from independence till date, their pet projects and the impact they played in nation building albeit behind the scenes

The saying ‘behind every successful man is a successful woman’ has been proven several times over. In leadership, it is no less different with the Office of the First Lady as they are the support system their husbands lean on to excel in their careers and duty to country.

Although Nigeria’s constitution does not officially recognise the Office of the First Lady, according to ‘Concept of First Ladies and Politics in Nigeria’ by Kunle Ajayi, it has become a syndrome and a phenomenal issue in Nigerian government and politics.

In Nigeria, although these First Ladies might not be officially recognised, but they are every bit as important as their men, because they are often the engine room that drives the men. From Flora Ogbenyeanu Azikiwe, the wife of the first President of Nigeria, Nnamdi Azikiwe to the incumbent, Hajia Aisha Buhari, these women have become stronger and much more formidable 60 years later as they have grown to become pillars through various empowerment schemes and outreaches to women, youths and children. Below are the First Ladies in the annals of Nigeria’s independence:

Flora Ogbenyeanu Azikiwe
Mrs. Flora Azikiwe, the wife of the first President of Nigeria, Nnamdi Azikiwe, became the First Lady of Nigeria from October 1, 1963 to January 16, 1966.

Maryam Babangida
Mrs. Maryam Babangida, wife of General Ibrahim Babangida, came into office as the seventh First Lady on August 27, 1985 until August 26, 1993.
She began what would later be known as pet projects. Hers was the Better Life Programme (BLP) targeted at largely mainstreaming and gender-gap closing strategy to re-position Nigerian women socio-economically and politically. It was launched on September 14, 1987.
Its objectives were designed to raise the social consciousness of women about their rights, as well as their social, political and economic responsibilities; bring and mobilise women together, as well as stimulate, educate, enlighten, improve, enrich and encourage them.

Maryam Abacha
Mrs. Maryam Abacha, wife of General Sani Abacha, assumed the office of the ninth First Lady of Nigeria on November 17, 1993 until July 8, 1998. Her pet project was the Family Support Programme (FSP). It was her own way of pleading women’s cause and out of concern for the improvement of Nigerian families’ quality of life. The FSP, in attaining its aims, had a wide range of line-up projects bordering on health, agricultural and vocational activities.

Stella Obasanjo
Mrs. Stella Obasanjo, the second wife of President Olusegun Obasanjo, became the 11th First Lady of the country from May 29, 1999 and passed on while in office on October 23, 2005. Her pet project Child Care Trust (CCT) particularly targets challenged children and women with disabilities. It has as its motto ‘Sowing the Seeds of Hope’ and it specifically aims to provide quality health care and other social services for children and women in Nigeria.

Patience Jonathan
Mrs. Patience Jonathan fondly called “Mama Peace”, is the wife of the immediate past President Goodluck and the 13th First Lady of the country from May 6, 2010 to May 29, 2015. Her pet project started while she was in Bayelsa as wife of governor of the state.
Her NGO then was known as A. Areuera Reachout Foundation was established in 2006 was tilted towards providing training for women, medical support and assistance to people with heart conditions, empowering the youths and women to overcome challenges through skills acquisition and development for productivity and wealth creation as well as rehabilitation of female ex-convicts especially in the Niger Delta. It also extended its mission of reaching out to the elderly.

Aisha Buhari
Mrs. Aisha Buhari, second wife of the incumbent President of Nigeria Muhammadu Buhari, became the 14th First Lady of Nigeria on May 29, 2015 till date. Her pet project Future Assured is an initiative of the Aisha Buhari foundation, a Non-Governmental Organisation set up with the aim of advocating for the wellbeing of women, children and adolescents in Nigeria.