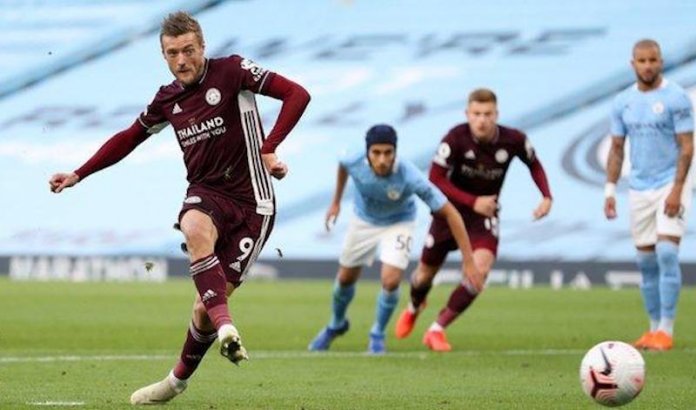 Jamie Vardy scored a hat-trick as Leicester City inflicted a remarkable 5-2 defeat on Manchester City to go top of the Premier League.

Despite going behind to a superb fourth-minute strike by former Foxes midfielder Riyad Mahrez, the visitors responded in stunning fashion.

Vardy levelled with a penalty before the break after he had been fouled by Kyle Walker, and he then sealed his second treble against Pep Guardiola’s side from the spot, after he had cleverly turned home Timothy Castagne’s cross to make it 2-1.

James Maddison scored for the first time since 1 January when he curled home a stunning fourth for Leicester.

And although Nathan Ake pulled one back with his first goal since a £40m summer move from Bournemouth, a third Leicester penalty – this time converted by Youri Tielemans because Vardy had already gone off – completed a memorable afternoon for Brendan Rodgers’ Foxes, who have started a top-flight season with three successive wins for the first time.

In contrast, Guardiola was suffering his worst home defeat as City boss, with his team now in the bottom half of the table.

Elsewhere, Newcastle rescued an injury-time point against Tottenham Hotspur from the penalty spot entirely against the run of play after another controversial handball decision.

Spurs could have been 5-0 up if they had taken their chances by the time Andy Carroll headed a cross against Eric Dier’s arm from close range. The decision was made after video assistant referee consultation.

Callum Wilson stepped up to score the penalty with practically the last kick – and Spurs boss Jose Mourinho walked down the tunnel in disgust.

Lucas Moura had put Spurs ahead at the back post from a low cross by Harry Kane, the England striker’s fifth assist in two league games.

Spurs would have been out of sight had it not been for Magpies keeper Karl Darlow, who made 11 saves – including two excellent ones to deny Kane.