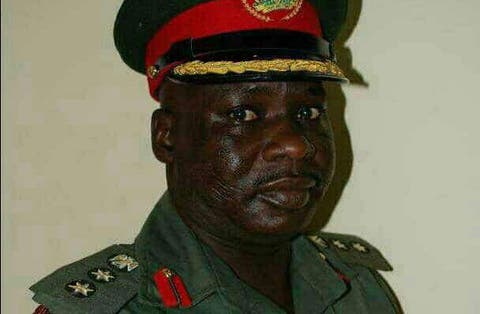 As the harvest of death of top-echelon officers and foot-soldiers of the nation’s armed services spawned by the long drawn bloody insurgency of Boko Haram terrorists continues, a new engagement roadmap is imperative, writes Louis Achi

With a sage insight born from extended observation of the human story, Plato, the Athenian philosopher during the Classical period in Ancient Greece held that, “Only the dead have seen the end of war.” For Nigeria Army’s Col. Dahiru Chiroma Bako, Commander of the 25 Task Force Brigade, Damboa, this grim discernment holds true.

The atmosphere was not celebratory. The business on hand was burial of the slain Commander of the 25 Task Force Brigade of the Nigerian Army, Damboa, Col. Dahiru Chiroma Bako.
He was buried with full military honour, including the 21-gun salute, with the funeral oration read out by the Chief of Army Staff, Tukur Buratai.

In his tribute to the gallant officer, he acknowledged that late Bako played a critical role in the counter-insurgency operations of the country. The COAS also presented a flag to the next of kin of the deceased in line with military tradition.

Seventy-two hours earlier, last Sunday morning, according Ado Isa, the spokesman of the Nigeria Army’s Operation Lafiya Dole, the late Col. Bako had led a patrol to clear Boko Haram terrorists from Sabon Gari-Wajiroko axis near Damboa, when his patrol team entered an ambush.
The troops cleared the ambush resulting to the killing of scores of terrorists and recovery of weapons and equipment. Bako was wounded in action and immediately evacuated by the Air Task Force Operation Lafiya Dole, to the 7 Division Hospital at Maimalari Cantonment.

He was reportedly recuperating well after a successful operation at the hospital before suddenly passing on in the early hours of Monday.
A clear consensus that the late Col. Bako was a gallant and dogged military officer, under whose watch Damboa was never defeated, speaks to his courage in the face of danger. According to the COAS, the slain commander was humble and committed in discharging his duty and was part of the success recorded in degrading Boko Haram insurgency in Borno State.

“He has been one of the greatest in trying to stabilize not only Borno but even the neighbouring Yobe State. We will remember his contributions forever. May almighty Allah reward him, and forgive him,” the pained COAS further stated.

Successive targeted attacks on field commanders are becoming a worrying feature of the anti-insurgency warfare.
It could be recalled that a former Theatre Commander of Operation Lafiya Dole, Major Gen. Olusegun Adeniyi, survived an ambush by Boko Haram terrorists along Maiduguri-Damaturu Road in on January 7, this year. Adeniyi was reportedly on his way back to Maiduguri, Borno State, after a visit to troops recently deployed to Jakana to protect lives and property, when the attack happened.

The incident occurred few kilometres away from Jakana in Konduga Local Government Area of the state. According to a source, “As we were coming back to Maiduguri after we left Jakana, suddenly we started hearing gunshots all over the place and before we realised what was happening, they had bombarded us with heavy fire from a different angle.

“Fortunately, we fought through our way and repelled the insurgents but the theatre commandant’s vehicle was badly damaged.”
Recurring narratives like this tend to suggest that the insurgents enjoy superior actionable intelligence gathering, which often aids their surprising bloody depredations against high value military personnel.

The key emerging poser flowing from repeated audacious attacks on battlefield military personnel is what is the place of technology, especially drones, in efforts of the Nigerian military to conclusively resolve this terrorist impunity?
This reporter had posed this question directly to the COAS in December 2018, while he fielded questions at a dinner and media interactive session organised for editors and defence correspondents in Maiduguri.

Lt-General Buratai had disclosed that the Nigerian Army had evolved new technologies and application of drones in the campaign against Boko Haram insurgents in the Northeast theatre. Buratai further conceded that applications of drones and new technologies were critical in modern warfare to ensure successful implementation of the counter insurgency campaign.

He disclosed that the army had utilised drones in surveillance and research, adding that the process was effective in execution of its operations against the dreaded Boko Haram insurgents.

His words: “Now, even the uniform is technology-based, it will be tagged wherever you are; it sends signal when you are in danger, and these issues are very important. Technology is playing important role in warfare and we are not left out; we have in place a transformation and innovation department.

“The department is working on research and developments not only on basic equipment but equally more scientific and technological facilities to enable us to carry out our operations. We are also working on deployment of drones, the Nigerian Air Force has been deploying drones in our operations in the northeast and they are deploying more, it has been very effective in this operation. “For surveillance, local drones are deployed and when new ones are also deployed, it will be effective and useful in the operation”.

With the continuing loss of servicemen to the terrorists’ apparent deadly outflanking maneuvers backed by specific field intel, the advances and exploitation of technology described by Buratai becomes hazy. These need to be quickly domesticated.
A drone sweep of the battlefield environment ahead of late Col. Bako’s foray last Sunday would most probably have disclosed an ambush and ultimately saved lives and loss of limbs.

It could be readily recalled that former President Barack Obama’s reliance on both offensive and surveillance drone operations significantly reduced casualties in the US operations against terrorist entities across the globe.
As Boko Haram and its terror associates scale up their capacity to kill, maim and kidnap at will, the nation’s military services certainly need a new engagement road map – traversing strategy, technology, equipment, funding, leadership and service morale.

Uloko was not felled. It is still standing straight with pride.