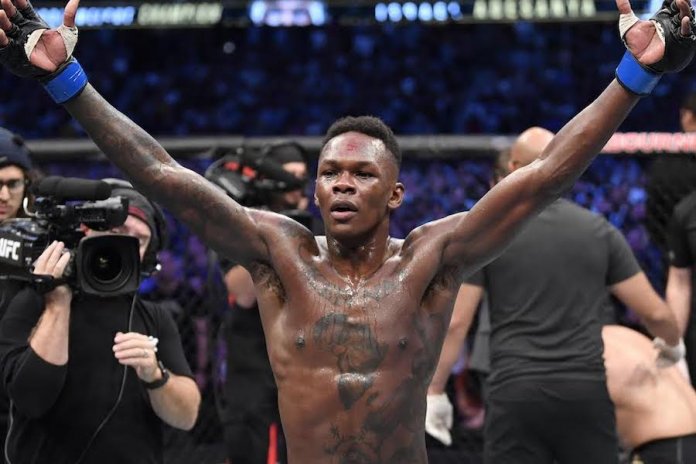 With less than 48 hours into the biggest UFC middleweight contest this year, Nigerian-born New Zealander, Israel Adesanya, has promised to retain his title when he takes on Brazilian challenger, Paulo Costa in the main bout this weekend.

The UFC 253 will be the Nigerian born fighter’s first bout since the Covid-19 era and he will put his middleweight title on the line against the Brazilian in a bout in ‘Fight Island’ in Abu Dhabi, United Arab Emirates.

The fight is exclusive to DStv Compact Plus and will afford numerous Nigerian fans to follow the proceedings from 1.00am Sunday morning.

In a telephone interview with THISDAY before his evening training session yesterday, Adesanya assured his fans that he will come out top again when he squares up against the Brazilian opponent.

“I always want to show respect to all my opponents and Paulo is now on my list. As a determined and hardworking sport man, I am optimistic that I will come out victorious this weekend.

“The preparation so far has been good and the fight has been made a long time ago and in the last 12 weeks, the preparation has been on going. This particular fight ought to have come up long ago but he has been avoiding me but now I am the champion and he wants to unfortunately for him, take the belt from me. I am not ready to relinquish it yet,” Adesanya observed.

The Odogbolu-born Nigerian kick-boxer is going into this weekend fight on 19 straight wins as against his opponent who is also without a loss in all his 15 fights till date.

Pundits have rated the duo as the best so far in this division owing to the fact that both fighters tend to go the distance in their respective fights and fans are looking forward to a blockbusting night.

Adesanya, rated as one of the best strikers in the mix only finished just two bouts within the regulation time against Derek Brunson and Robert Whittaker from whom he won the title.

But all the other victories came via decision against Rob Wilkinson, Marvin Vettori (split, and highly controversial), Kelvin Gastelum, and the latest one against Yoel Romero.

His first title-defence against the Cuban was one of the worst fights in recent time, with both guys avoiding fighting.

However, one unique aspect of this bout is that fans will not be in the stand because of the Coronavirus pandemic. But Adesanya insisted that lack of fans will not deter his quest to retain his title.

“As a sportsman, fans are the motivational factor but the era we are today will not allow them into the arena. We are both at disadvantage with this but I am used to it considering the fact that some time ago in China, I fought there will just about 40 people in the stand hence it’s not new to me,” he affirmed.

Adesanya also confirmed that moments after the Covid era, he plans a visit to Nigeria.