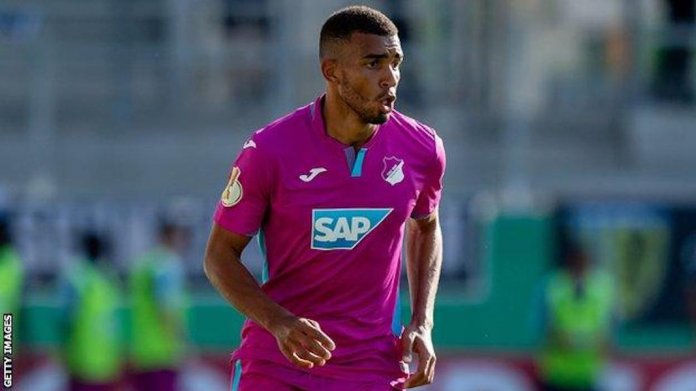 There are strong indications that the growing list of players with dual nationalities but playing for Nigeria may have an addition as Coach Gernot Rohr is looking at the prospect of Germany Youth Captain, Kevin Akpoguma to commit his international future to the Super Eagles.

Since the German took charge of Nigeria in August 2016, the number of players born overseas in the senior national team has risen with the arrivals of Ola Aina, Brian Idowu, Tyronne Ebuehi, Joe Aribo, Maduka Okoye, Kingsley Ehizibue and Cyril Dessers.

Akpoguma, 25, who plays for Bundesliga side Hoffenheim, has a German mother and a Nigerian father – making him eligible to play for the three-time African champions.

And, despite 62 Germany caps from Under-16 to Under-21 level, the defender has opted to capitalise on the FIFA rules which allows him to switch allegiances.

“It was not my job to convince (Kevin) Akpoguma to come and play for Nigeria,” Rohr told BBC Sport yesterday.

“I had a good conversation with him and his family while watching several games in Hoffenheim.

“After the matches we met and could talk. I presented our projects and I could speak about the team, about this incredible period in the Super Eagles and my vision for the team.

“He was sold on this and would love to be a part of the team and play in big international competitions like the Africa Cup of Nations or even the World Cup.”

Rohr’s policy of picking foreign-born players has angered some observers in Nigeria, but he remains unfazed as he continues to increase the selection pool for the Super Eagles.

Akpoguma’s commitment gives the coach an extra option as he looks for a long-term addition to the regular centre back quartet of Kenneth Omeruo, Leon Balogun, William Troost-Ekong and Semi Ajayi.

Amid Rohr’s excitement about the prospect of working with the defender, he admits that he will have to wait before welcoming him into the Super Eagles fold.

“We are very happy about the decision of Kevin Akpoguma to switch from Germany to Nigeria,” Rohr said.

“Because he played for Germany at youth levels, the process is not finished yet because FIFA must give the authorisation.

“He has fulfilled the written request to switch and we only await the good news that he can finally play for us.

“It’s too soon to expect him to play our two friendlies in October, but hopefully for the Nations Cup qualifiers in November.”

Born in the western town of Neustadt an der Weinstraße, Akpoguma started his professional career at Karlsruhe SC and also played for Fortuna Düsseldorf.

The 2014 European U19 Championship winner captained Germany at the 2015 Under-20 World Cup in New Zealand, helping them beat Nigeria 1-0 in the second round.