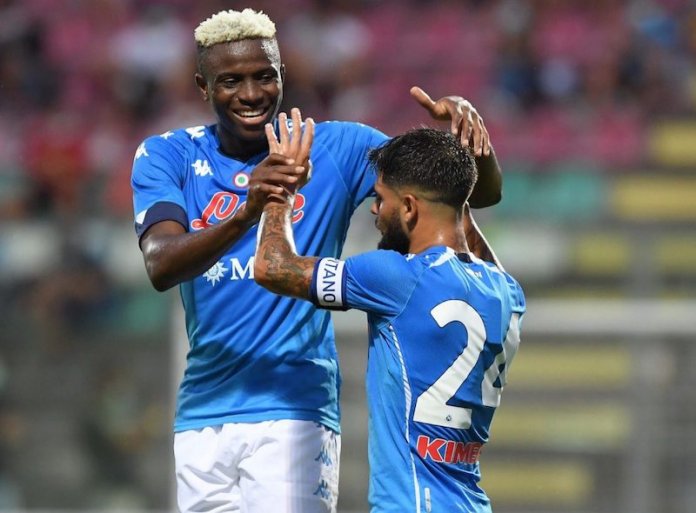 Nigerian forward, Victor Osimhen, 21, started his Italian Serie A campaign in flying start yesterday as his new club, Napoli snatched an away 2-0 win at Parma Calcio.

Osimhen, who became Napoli’s record signing when he joined from Lille in the summer for a reported €70 million, was brought on for his debut after an hour for Diego Demme in Sunday’s Serie A match and made an instant impact in their win.

The Super Eagles striker almost marked his debut with a goal on 80 minutes but saw his effort go just off target.

Dries Mertens opened scoring for Napoli in the 64th minute before Lorenzo Insigne doubled the lead on 77 minutes.

The win puts Napoli top in the league table ahead of Fiorentina on goals difference.

Meanwhile, Napoli coach, Gennaro Gattuso, who is notoriously hard to please dished out rare praises yesterday when describing his new Nigerian signing Osimhen as a “young lad with the head of a 40-year-old”.

“I was struck by Osimhen’s serious attitude,” said Gattuso. “He hasn’t forgotten where he came from and the sacrifices he made.

“He built himself up on his own and I congratulate him for his will and desire. He is a young lad with the head of a 40-year-old, I hope he doesn’t make mistakes and doesn’t change his attitude,” observed the former AC Milan defence strongman.

Gattuso said he wanted to get Napoli back into the top four again after last year’s turbulent season where they finished seventh after a late recovery and won the Coppa Italia as consolation.

“It’s natural that given the history of the last ten years we want to return to the top four,” he said.

“I want to see a well organised team that have clear principles in their heads and that know how to make themselves available in difficult moments.”