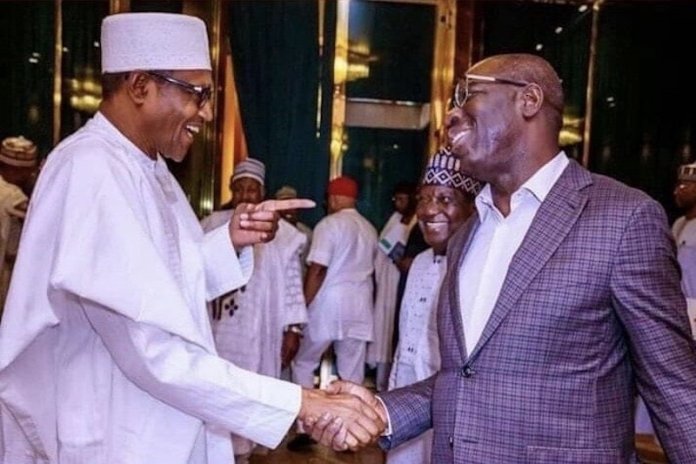 The outcome of the contest left APC, the ruling party at the centre, dumb-founded as PDP routed it in 13 of the 18 local government areas of the South-south state, returning the oil-rich region to its firm grip.
With the emphatic victory, PDP now controls the entire South-south states, including Akwa Ibom, Bayelsa, Cross River, Edo, Delta, and Rivers.
Obaseki was declared winner in the keenly contested election by the Chief Returning Officer, Prof. Akpofure Rim-Rukeh, Vice Chancellor of University of Petroleum Resources, Effurun, Delta State.
He said Obaseki scored 307,955 votes, winning the ballots cast in 13 local government areas against Ize-Iyamu’s 223,619, who prevailed in the remaining five councils.

“I have consistently advocated for free and fair elections in the country because it is the bedrock of true democratic order.
“Democracy will mean nothing if the votes of the people don’t count or if their mandate is fraudulently tampered with.”
Buhari also commended the people of Edo State, the political parties, candidates and security agencies for conducting themselves responsibly.

In a statement yesterday by his media aide, Mr. Crusoe Osagie, Edo State governor lauded the people of the state for their display of immense courage and support in the face of threats, intimidation and brutalisation.
The governor, in his appreciation message, also saluted Buhari, INEC, security agencies, and other stakeholders, who participated in the conduct of the gubernatorial election for ensuring a free, peaceful, and credible poll in the state.
Obaseki said: “The great people of Edo State have spoken. They have spoken loud and clear. We thank God Almighty and give him all the glory for this victory.

“Thank you, President Muhammadu Buhari, for defending our democracy and allowing the Independent National Electoral Commission (INEC) and the security agencies to perform their constitutional functions without interference.
“INEC and the security services have shown to Nigerians and the world that they are capable of conducting free and credible elections.”

The governor continued: “Words fail me in saluting our teeming supporters who displayed immense courage in the face of threats, intimidation, and brutalisation. The collective will of Edo people made it possible for this triumph over godfatherism.
“I am eternally grateful to my party the Peoples Democratic Party (PDP) and my brother governors not only for giving me the umbrella during my political storm but for the hard work which has brought me back to office.
“Our success has reinforced my belief that there is nothing we cannot achieve as a people if we pull forces together and collectively call on God for support.

“I reiterate that working with my Deputy, Hon. Philip Shaibu, we are committed to Making Edo Great Again. Thank you for your support.”
Atiku congratulated Obaseki on his victory.
In a statement, the former vice president also commended the people of Edo State for their resilience in the face of the forces arrayed against them, saying the victory of Obaseki “is not just a victory, but a declaration of independence from the anti-democratic forces of godfatherism and militarism.”
In his congratulatory message, Fintiri encouraged Obaseki to write his name in gold as one who changed the politics of Edo State by putting godfatherism to rest.

In the message signed by his Chief Press Secretary, Mr. Humwashi Wonosikou, Adamawa State governor said Obaseki’s victory has put to rest godfatherism and has also changed the political landscape of Edo State.
Governor Wike of Rivers State, who was also the Chairman of PDP National Campaign Council, said the efforts of the party were not in vain.

Wike, who spoke in Benin City shortly after INEC affirmed Obaseki as the winner of the election, said: “Our efforts are not in vain. My brother has been declared the winner of the 2020 governorship election in Edo State. Let me thank my colleagues, the governors of Delta State, Oyo State, and all other people who served in the campaign council; I do not know how to thank them.
“I also thank the governor of Edo State for giving us the necessary support that led to this victory. A few hours ago, we were here to brief you on what was going on, and thank God, thereafter, the announcement came. We also thank all those who worked in the campaign council in Edo; we want to formally thank all of you.”

In his own message, Governor Emmanuel of Akwa Ibom State, through his Chief Press Secretary and Senior Special Assistant, Media, Mr. Ekerete Udoh, thanked God for ushering in a peaceful and credible election in Edo State.
Drawing similarities to what happened last year in his state. Emmanuel said, “Last year, the good people of Akwa Ibom State rose in unison and said no to godfatherism and the much-touted federal might, declaring their fidelity to the supremacy of our ONLY GOD in the affairs of man.

“Today, our brothers and sisters in Edo State have replicated the same wholesome faith and belief in God over the boastful exuberance of ordinary mortals by voting to return a leader who best represents their values and ethos; a doer and not a talker,” he said.
In a press statement signed by his Special Adviser, Media and Publicity, Christian Ita, Ayade described Obaseki’s victory at the polls as well deserved considering his achievements in the past four years.

“I extend my warm felicitations to you on your well-deserved victory in the just concluded Edo gubernatorial election. For those of us who have keenly followed your giant strides in Edo State, your victory did not come as a surprise,” he said.
Okowa also congratulated his Edo counterpart, and his deputy, Hon. Philip Shaibu, on their re-election.

In a statement by his Chief Press Secretary, Mr. Olisa Ifeajika, in Asaba, yesterday, Okowa described the re-election of Obaseki as “the confirmation of the will of the people” and called on Nigerians to always stand for good leaders as Edo people just did for Obaseki.
He stated that the people of Edo across the 18 local government areas of the state spoke loudly and clearly in their reaffirmation of the choice of Obaseki as their governor.

Governor of Sokoto State and Chairman of PDP Governors’ Forum, Tambuwal, congratulated Obaseki.
In a statement he signed, Tambuwal said the decisive turning point in any major contest is not who wins, but adherence to the ground rules that made it possible for a victor to emerge without a squabble.

“Our collective resolve, borne out of our shared democratic values, team spirit, and concern for the people as our primary constituency galvanised us to work within the ambits of the spirit and letter of the law. All of us, as servants of the people, set aside, with the utmost caution, negative thoughts that our party will not have a fair deal. Our logistical and legal nightmares, if any, were that the people of Edo State will not get a fair deal if the rules of the game are circumvented before and during the election,” Tambuwal said.

Secondus has also congratulated Obaseki and Shaibu on their well-deserved victory, describing the victory as a clear affirmation and demonstration of the people’s goodwill in appreciation of the outstanding performance of the governor and his deputy in their first term.
The national chairman praised Edo people for standing up for democracy through their avowed determination to ensure that the will of the people and nobody else prevailed in their state.

PDP also yesterday congratulated the people of Edo State on the re-election of their chosen leader, Obaseki, on the platform of the party.
In a statement signed by the National Publicity Secretary, Mr. Kola Ologbondiyan, the party said the victory, as won by the people, is historic and serves as a strong, viable, and unambiguous lesson to leaders.
It said: “Our party celebrates the resilience and courage exhibited by the people of Edo State in resisting the antics of the enemies of democracy, who, as vote buyers, patrons of lions and tigers, as well as beguilers, attempted to take over the political space of Edo State.

“We rejoice with Edo people for helping to reset the political culture of our nation by casting their votes, protecting the votes, ensuring that their votes counted and following it, ‘bumper-to-bumper,’ to the final point of declaration.”
Congratulating Obaseki, Saraki in a statement from his Media Office in Abuja, stated that his victory represented the determination of the good people of Edo State to decide who governs the state and to ensure their votes count at all times.
Former President of the Senate, Senator David Mark, said Obaseki’s victory was a triumph of the will of the people.

Meanwhile, APC in Edo State has alleged foul play in the election, and called on party members to stay calm while the party leaders study the results and decide what its next action would be.
In a statement issued by the Chairman of APC Media Campaign Council, Mr. John Mayaki, the party rejected the results, citing alleged strong-arm tactics.
“Our people were arbitrarily arrested, many of the figures were fabricated,” it said.
It further alleged illicit tampering with results, to shore up PDP numbers and mark down APC’s performance.
“In areas where we won – they cancelled them. They decreased the votes in areas we had an advantage. They rejected our results and jerked up theirs,” Mayaki said.

Meanwhile, the Independent National Electoral Commission (INEC) Chairman, Prof. Mahmood Yakubu, has expressed appreciation to all those who worked to make the election a success.
While winding down the Situation Room on Edo Governorship Election at 2.20 p.m., the chairman said there was no respite yet for all as attention shifts to Ondo State where the commission would in three weeks conduct another governorship election.
According to INEC chairman, three weeks after that it would be the series of by-elections in 11 states.
Yakubu challenged all INEC staff and participants in the conduct of elections in the country to prove that the success in Edo State was not a fluke but the standard in the conduct of elections.