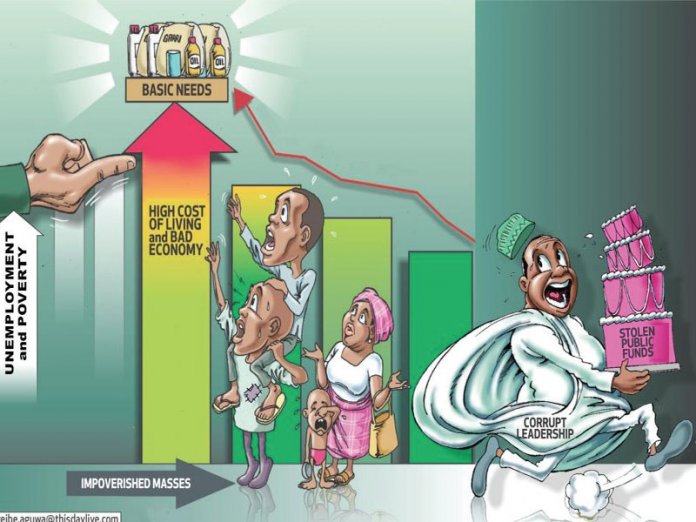 Poverty is a terror, in Nigeria as elsewhere.
In Nigeria, poverty, has reduced life to the bare bones of survival from which it continues to milk marrow. Soon, there may be no bones at all.
Nigeria is at a banquet: the table at the center is gold. Problem is that so few find seat and even fewer taste the ambrosia served.

In a country of bountiful blessings, every sharing formula till date has come up short. There is a Constitution which emphasizes federal character but suffers the handicap of a doctor prescribing a drug not in his pharmacy.
Nepotism rages like a wild fire, consuming all in its path. In burning away the last vestiges of meritocracy, it leaves only dust and ashes.

For Ndi Igbo, Biafra is still very much live. The good people of the Niger-Delta continue to lament their environment. The southwest is suspicious of Nigeria`s federalism and the north faces multiple terrors from rampaging marauders.
Nigeria is a big loaf torn between many jostling for a piece of it. Yet, obscurity is the lot of those for whom the loaf should be a lifeline.

Insecurity remains grave. Life and property are at the mercy of ruthless killers. The future has never been bleaker. The past lies naked beneath the gaze of those who want to change it.

In these days of rampant unemployment,774, 000 jobs are up for grabs between the National Assembly and the Ministry of Labour and Employment. True to form, the squabble has been atrocious. The members of the National Assembly, exhibiting its entitlement syndrome, has laid claims to a larger number than the ministry is willing to give.

No a few of the slot should end up with the thugs who service their electoral violence. Nigeria is a banquet many have been invited to but so few are seated. The majority are caught in the mazes of the margins, macerated by the maces of those whose mascot is the ravening beast that injustice is.
In Nigeria, it is not ironical that the jobs meant to placate the plight of people hardest hit by the pandemic would become a problem to them.

Already, Nigerians formed an uncomfortable audience when one of the Ministers of Labour and Employment squared up with the National Assembly committee examining the project.
Many Nigerians are wondering aloud about what is even in the jobs for them. In the current economic climate, N60,000 does not even begin to scratch the surface of what the average Nigerian needs in a month to survive, and not curse his citizenship of Nigeria. That it has become a source of so much controversy tells a noisy story.

So, iniquitously, the country is diseased by the terminal ailment that inequity is. The disease has spread fast, afflicting many, like a pandemic, yet hubris has precluded many from subjecting themselves to curative procedures. Perhaps, they fear the cynicism of the judiciary – that once hallowed temple of justice that has now become a venue where justice is subjected to the humiliating condescension of commerce.

Those who form poverty`s long queues of privations see their begging bowls spat into and their status re-empasised while the do-nothings feed fat and curse those who have nothing.
Nigeria, long sat on the gunpowder of those turned away, is at the brink with the ticking thickening.
Things must change immediately. The alternative is to risk an actionable anger, one so bloated by many years of epic inequality.

The building of another Nigeria must immediately begin: a different Nigeria; a Nigeria where every Nigerian is invited to the banquet and given a seat of honour fitting for all citizens.
Kene Obiezu,
Abuja