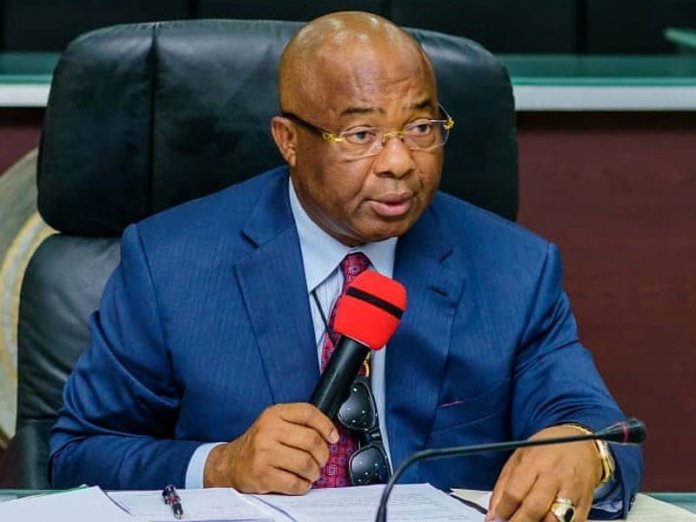 Imo State Governor, Hope Uzodimma, has signed into law a bill empowering him to detain anybody without questions or court/police warrant, even as citizens including members of the opposition in the State House of Assembly reacted angrily over what they described as “obnoxious law.”

The law otherwise known as ‘Imo State Administration of Criminal Justice Law, 2020’ empowers the state governor to detain anyone at his pleasure without the need for a court warrant.

THISDAY observes that Sections 484 and 485 of the law provide that the governor may effect such detention notwithstanding the provisions of any other law, including that of the Nigerian Constitution 1999 (as amended).
The recently signed law, a copy of which was made public yesterday, does not recognise the need for an arrest warrant for any person who it deems to be “in legal custody”.

The offending Section 484 of the law reads: “Where any person is ordered to be detained during the Governor’s pleasure he shall notwithstanding anything in this law or in any other written law contained be liable to be detained in such place and under such conditions as the Governor may direct and whilst so detained shall be deemed to be in legal custody.”

While Section 485 provides that such person “detained during the Governor’s pleasure may at any time be discharged by the Governor on license” and that “a license under subsection (1) of this section may be in such form and may contain such conditions as the Governor may direct.”

The section further states that such license “may at any time be revoked or varied by the Governor”, adding: “Where license has been revoked the person to whom the license relates shall proceed to such place as the Governor may direct and if he fails to do so, may be arrested without warrant and taken to such place.”

The provision is seen to be against the provisions of Sections 34 and 35 of the 1999 Constitution, which guarantee the fundamental rights to freedom of liberty and human dignity.
Section 35(4) specifically provides that any person who is arrested or detained ”shall be brought before a court of law within a reasonable time.”

Subsection five states such period could be one day “in the case of an arrest or detention in any place where there is a court of competent jurisdiction within a radius of 40 kilometres” or two days/longer period as may be considered by the court “in any other case.”

Hon. Frank Ugboma (Deputy Minority Leader Imo State House of Assembly) who presented the bill said “the Bill I presented had about a total of 372 Sections.

How and where it was amended, recreated and reshaped into Section 484 and beyond remains a mystery and a legislative wonder of our time as what I presented and circulated to my colleagues during plenary, both in the First and Second readings did not contain such obnoxious and embarrassing Section 484. Neither was it deliberated in the House Committee of the Whole. It indeed never existed in the House.

“No one has been able to explain to the members of the 9th House how and at what stage the said Section 484 was inserted into the Bill. It smacks of an evil manipulation to throw Imo people into the dungeon.

“As a Lawyer, I have had cause to fight against such obnoxious laws and as an activist there is no way this section would have scaled through plenary in the 9th House which I am part of. All of us are already available victims of these obnoxious sections. Not even those who practiced this calculated affront on the Constitution are exempted.

“This particular provision is a nullity ab initio in view of the unambiguous provisions of sections 1(1),(3),4,5,6 and 36 of the 1999 Constitution of Nigeria (as Amended).This is very appalling.

“In my quest to ascertain which hands of Esau made it into the Bill I presented, attention was drawn to a list said to be the names of Imo people that facilitated the domestication of the Law in the State. It need not be overemphasised that in lawmaking, such contributions and or inputs from members of the public are usually submitted to the House for deliberations. I am however saddened that there is no record of presentation of such obnoxious contributions to the House. There is no record anywhere that such contributions was laid and/or circulated to members during plenary.

“I have requested that my colleagues constitute a committee to ascertain how such horrendous act was practiced on this ordinarily good legislation. Its outcome, I believe would interest all lovers of democracy and enable future legislative vigilance.

“This was not the Bill I presented and sponsored.
“In the manuscripts that I received after each hearing and which I have today compared with that given to my colleagues, there is no hand of Esau. This has informed my view and I have today forwarded a Bill for the immediate amendment of those offensive and draconian sections,” he said.