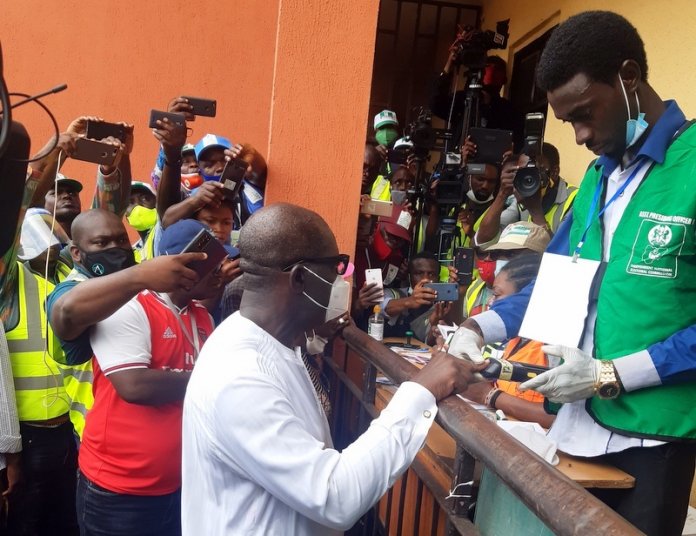 The Edo State Governor and candidate of the Peoples Democratic Party (PDP) in the ongoing election in the state, Mr. Godwin Obaseki, has expressed disappointment over the failure of card readers in several wards across the state.

Obaseki, who spoke to journalists shortly after casting his vote on Saturday in Oredo Local Government Area of the state at about 11:47am, noted that after spending several hours on the queue due to card reader issues, the failure of the card readers shows the unpreparedness of the Independent National Electoral Commission (INEC).

According to the governor, “I expected better preparation on the part of those saddled with the responsibility to conduct this election. To wait for one and a half hour on the queue before exercising my franchise is a bit disappointing.

“Given that this is a sole day’s election, I expected better planning and preparation and resources should have been put into this election.

“At the last presidential election, in my polling unit, there were two polling points which eased the burden on voters. You all are witnesses to how long it has taken.

“The card reader here is working slowly, and this is the situation in all the major voting centres in Oredo Local Government Area of the state as I speak.

“At Garrick Memorial School, I understand that over 500 voters are already stranded because they can’t vote due to slow processing of the card reader.

“One would have expected that INEC will have deployed more card readers and more voting points in high density polling centres.”

Responding to the issue of vote-buying at polling units, the governor said that the security agencies are not doing what they assured Edo people and Nigerians before the election.

“The security agencies assured us that they won’t allow anybody who doesn’t have business of voting, into a particular place, but they are working contrary to what they promised us.

“You can see cars parked with a lot of cash being disbursed to people buying votes, and it seems to be normal practice, but we are not perturbed as people know what to do. Cash can’t buy their future,” Obaseki noted.