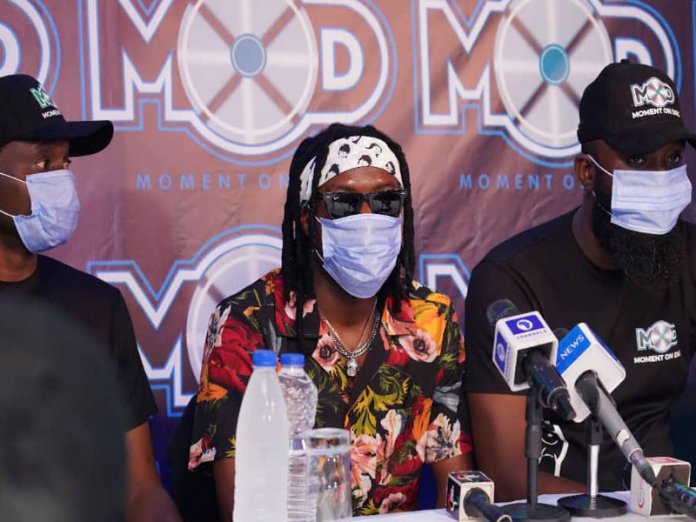 The Nigerian music industry received a boost with the recent unveiling of MOD, a multifaceted entertainment outfit that is poised to inject revolutionary management into showbusiness in the country.

Davies Den, CEO, Den Management, which handles talent and business part of MOD, explains the anatomy of the outfit thus: “MOD has three parts; MOD Studios, MOD Records and MOD film production outfit. We have platforms where we encourage new and emerging artists. We encourage talents. We do partnership with brands. We are fully ready for the industry,” he discloses.

Speaking on what makes the new outfit different, he says: “MOD is a full entertainment outfit. We have a five-in-one studio that can be utilised as dance studio, visual studio, recording studio and for live rehearsal and mini comedy event. The studio is equipped with top class equipment, including cameras, lighting and sound equipment with cutting-edge technology.”

Meanwhile, MOD has hit the ground running with the signing of J100 as the first official artiste under its record label. The emerging artiste, born and bred in Lagos, is acclaimed for his versatility in multiple genres including rock and pop, but prefers to describe his style as Afrosticks. He has been active in the music scene for a number of years.

His album is reportedly in the works and MOD is working towards an imminent release. “J100 is our first official artiste. He is an all-in-one talent. His songs would be released soon. We are presently gathering materials,” affirms Khlo, the A&R for MOD who says further, “we are hopeful the album would blow your mind.”

Arthur Paul, MOD’s marketing executive reiterates the outfit’s resolve to make its entry into the music industry counts by raising standards and boosting quality. “The world at large should expect the best from MOD. We have something different to offer. We are and we are prepared,” he says.