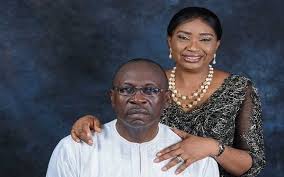 We seek, in these desperate times, a proper first lady for the people of Edo State, for you only have to look at a man’s wife and his relationship with her to know the type of man he is. A man, who is joined to an intemperate wife and is disposed to accede to all her wishes, will very likely possess a flexible morality and no mind of his own. A strong man with good character married to a strong wife with compassion will be a formidable pair. While the people of Edo State do not say any man is joined to an intemperate wife, we say that we are all fired up to gain a strong couple with unwavering compassion, humility and strength of character.

Already, Pastor Osagie Ize-Iyamu is a powerful philanthropist with a history of displaying compassion. He lives and breathes a better life for Edo people. The best marital decision he therefore made was entering into conjugal bliss with the inimitable and remarkable Prof Idia Ize-Iyamu, nee Omoregie. Without needing to mention the evident love between the couple, it is clear that her calmness matches his assuredness, so there is no danger that he may stutter and hesitate in a manner that will put her off her game, as has been known to be the norm in Edo state these days. If anything, she is strong enough to inspire her husband, something that anyone who watched the Obamas during their stint in the White House would have observed. Osadebey Avenue desperately begs for that nobility and regal conduct from its first family.

To determine who would be a proper first lady for the people of Edo, a few things must be brought to mind. The first is indigeneity. Accounts are sparse, few and far between where a woman not indigenous to a people went ahead to become a good queen or matriarch for them. It simply is difficult. Many successful queens are usually indigenous to the kingdoms that they find themselves. While in issues of business and industry, the current first lady may be experienced enough to motivate her husband, governing the people of Edo State is not the same thing. She needs an understanding of the people, the culture and the voices of the people. This is something that Prof. Mrs. Ize-Iyamu has in abundance, her father having drilled into her through his life’s example, the principles of empathy and philanthropy towards humans in general and Edo people in particular.

To put things in perspective, we have a governor on the one hand, who, even though he was part of an administration that built a hospital that should have moved Edo healthcare to the next level, he preferred to spitefully and with misguided vindictiveness close down the hospital and hound the governor who built it. On the other hand, we have a governorship candidate whose wife is a Professor of medicine and who will ensure her husband does everything possible to move healthcare from the disastrous level it currently is to the next level. Who would you choose? It’s a no-brainer.

It was because the Peoples Democratic Party (PDP) knew of her ability to be a tour de force in the APC campaign that they decided to attack her person by conjuring up imbecilic stories about her family, warning her to stay away from her husband’s campaign. Of course, they failed. The Omoregies came out in their numbers to declare their support for the Ize-Iyamu candidacy. The Obasekis joined suit and declared their support for Ize-Iyamu, taking time to denounce their son.

While individually, there are reports she is a great person, it is unfair to juxtapose her with the significantly more empathetic and philanthropic Professor Mrs. Ize-Iyamu, who has spent more time in Edo and is in tune with her people. Professor Idia has been able to display remarkable understanding of the POI SIMPLE agenda because her family, her children and her entire life and father’s legacies are tied to the development of Edo State. She would not side even with her husband if peradventure, he treads the wrong path – she supports what she believes to be good. There is no clear indication that the current first lady understands the MEGA (failure?) agenda of her husband, which seeks among other things to divide Edo State along religious, political, ethnic and social lines. What has she done for the people of Edo State apart from, at one time, distributing chickens to the widows in the state? Her husband’s poverty-inducing policies have no doubt made the widows kill and eat the chickens, for we no longer hear anything about them. No happy clack clacking in the poultries. No eggs sizzling in the pans. Just the growl of hungry stomachs and the glare of red, angry eyes.

While the Professor, a daughter of Edo, has not shied away from going into the markets and speaking to the women she will soon serve as first lady, the alleged industrialist has not been able to muster in her heart that same level of commitment. We cannot blame her. She simply does not have it in her. She was forced away from her comfort zone by her husband and dragged to be the first lady in Edo State where she did not grow up, can barely speak the language and cannot empathise well enough to be the first lady we want her to be. She, with her husband, needs to go.

The current first lady showed immense promise, but that was the end of the matter – a ‘show’. Professor Idia has not only shown promise, she has been living the life of a first lady for a long time and would be a fitting role model for any woman interested in going into a leadership position. We have chosen who we want in power, and it is the Ize-Iyamu family