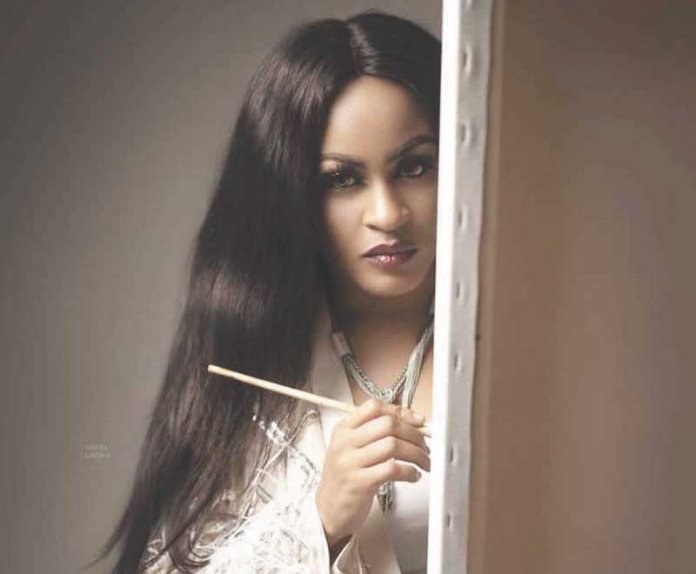 EXHIBITION
Granted, the Lagos art scene may still be leagues away to a full bounce-back. Yet, the undeniable hints of its resilience in these uncertain times of the COVID-19 pandemic are hard to ignore. Hence, Anehita Aletor’s solo exhibition, which opened yesterday (Saturday, September 12) at the Lekki-basedAqua 27 Mall, along Chevron Drive in Lekki, should surprise none of the local exhibition circuit’s habitués.

The exhibition, which is on until Friday, September 18, is titled the Untold Story Series and Joker Series. As for its title, it is an allusion to the two series of the recent works by the 2003 Ambrose Alli University, Ekpoma banking and finance graduate.

On the Untold Story series, it consists of a collection of paintings, which were originally planned for an exhibition that was supposed to be held by the Edo State Ministry of Arts and Culture. The series of paintings, Aletor explains, was inspired by the stories and folklores shared among the peoples of the state’s diverse cultural communities. And these stories and folklores were not only the ones she heard from her father but also the ones that Edo State indigenes were taught even right from their primary school years.

But, the trouble was that these stories were always based on the narrators’ exaggerated versions. Hence, the self-taught artist hopes to stir up a level of appreciation, as a reminder to her audience that they are relatable experiences that can be likened to how people live and feel today. “[It is a reminder] that we are not so different from who lived in those by-gone years when it comes to human emotions and how some things affect us human beings,” she adds.

Take the acrylic on canvas painting titled “Queen Iden: The Untold Love Story”, for instance. It shows a king and his wife locked in a warm embrace. According to the oral tradition, his wife had voluntarily offered her life as a propitiatory sacrifice to the gods for her husband’s misdemeanour. Another acrylic on canvas painting, titled “Adesuwa, the King’s Court”, depicts the king, as a family man, in a warm homely setting with a household pet, a leopard.

Then, there is the mixed-media she titled “Oamen”, which is based on the stories that her father told her. “This work tells at a glance the history and pride of the Esan tribe through the use of vibrant colours, motifs and selected materials,” she says.
Also in this series, she offers her own interesting perspective of the legendary Oba Akengboi, who, though not much written about in history, resonates with the youths because of his dreadlocks. Also on account of this distinguishing feature, parallels are often drawn between him to the 2018 American Marvel Comics-based superhero film’s character, Black Panther.

Meanwhile, the Joker series offers a humorous and light-hearted take on life. Metaphorically, the artist sees life as a game. “In the theatre of life,” she muses in a verse. “Everyone has a role to play./ Enjoy the show/ [before] the curtains fall.”
Because this is a series, which was originally inspired by the theatrical and historical vintage European clowns, the buffoon-like figures express the artist’s sense of humour and sarcasm. According to her, they theatrically and poetically allude to wealth, politics, love, family and both masked and unmasked emotions. Thus, she keeps reminding her viewer that life is a game and a theatre. Among the paintings in the series is “Poker Face”, which birthed the series and the rationale behind it all.

The Edo State-born artist has meanwhile come a long way since her first attempt at portraiture. And this was when she drew a portrait of President Muhammadu Buhari during his brief stint as Nigeria’s military head of state while she was in the kindergarten.

Art has always stalked her like a shadow even when she thought that it was not the kind of vocation that was worth her while. She had in the meantime kept abreast with the developments in the art scene until she was invited to a paint-and-sip event by her old high school friends in 2017. This marked a turning point in her life. So, 18 years after she had abandoned art, she discovered that getting back into the swing of things was not so difficult. Not even the fact that she was initially assailed with doubts could discourage her.

One thing led to another as she got more and more confident. Then, along the line, she came up with the brand name “Anothersoloartist”. Since she already had a white-collar nine-to-five, art became an after-work activity, which earned her the moniker “the artist at sunset”.

And, of course, there are her three teenage children, on whom she lavished so much affection and attention. They soon began to be drawn into the exciting world of art practice like their mother, albeit under her supervision and tutelage.

Her efforts, before long, began to pay off and put her in the limelight. She became more and adept with the use of acrylic paints even when she would now and then try her hand on installations. Collectors began to take interest in her works and she found herself working on commissions. In just one year, she recalls, she was able to complete and deliver a total of 28 commissioned artworks, which included drawings and paintings. All this was while her sights were set on building her private collection and creating a home gallery.

Featuring in both local and international group exhibitions further burnished her career and bolstered her confidence. And to think that she had, six years after her graduation from Ambrose Alli University in Ekpoma, trained as a certified aesthetician and holistic therapist from the UK-based schools: Carlton Institute in Windsor, Ray Cochrane Institute in London and the London School of Beauty and Makeup! Suddenly, her art, which has become her main life’s passion, extended to mentoring and teaching children and young adults in a bid to build up a team of young creative people.