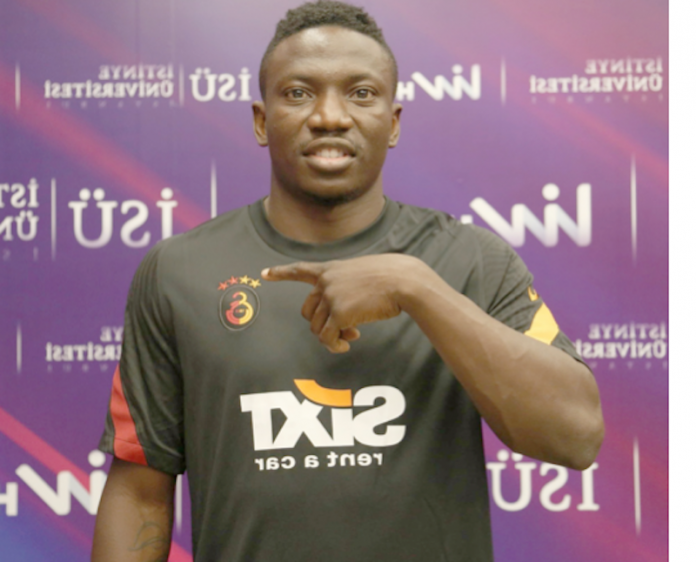 From being Stoke City’s Player of the Year, making the bench later became a luxury for Oghenekaro Etebo and was eventually condemned to train with the South Coast team U-23 side, which culminated in his spending the second half of last season on loan to Spanish side, Getafe. The Super Eagles midfielder has, however, made a move to revamp his career as he joined Turkish giant, Galatasaray on a year loan deal

Super Eagles midfielder, Oghenekaro Etebo, on Wednesday completed a one-year loan move to Turkish giants, Galatasaray following a successful medical, making it his second loan spell after playing the second half of last season in LaLiga with Getafe.
The Nigerian international will spend the 2020-21 campaign with the Yellow and Reds after temporarily leaving the Potters.

Etebo has expressed his delight after joining Galatasaray from Championship side Stoke City on a season-long loan.

The Turkish Super Lig giants announced the signing of the Super Eagles star from the Bet365 Stadium outfit on Wednesday.

The midfielder has been with the Potters since the summer of 2018 when he joined the club from Portuguese side Feirense.

The 24-year-old made 45 Championship appearances for Stoke before heading on loan to La Liga side Getafe in January.

He contributed as the Coliseum Alfonso Perez outfit finished eighth in the Spanish top-flight in the last campaign.

Etebo will now continue his development with the 22-time Turkish Super Lig champions until the end of the season after successful medicals.

“Galatasaray Sportif AS informed the public that an agreement was reached for the loan transfer of professional football player Oghenekaro Etebo until the end of the season,” read a statement from the club website.

“We welcome Oghenekaro Etebo to our club and wish him a successful season in the Galatasaray jersey.”

Etebo is delighted to team up with the Turkish side and has appreciated those involved in the success of the transfer.

“I am excited to announce my arrival at Galatasaray, I am looking forward to this amazing opportunity and I am happy to be part of such a historic club,” Etebo tweeted.

“Thank you to everyone at Stoke City and thank you to the DW Sports management team.”

He said: “I am very happy to have come to such a big and historic club. Thank you to our president and our vice presidents for their warm welcome. I really felt at home. See you at the championship at the end of the season. On this occasion, I would like to thank our President, all technical staff and all our fans for a warm welcome.”

The 24-year-old had earlier told Stoke City Manager, Michael O’Neill he did not see his future at Stoke, saying nothing changed as he spent the summer back home in Nigeria.

“Peter’s a player that made it very clear to me that he saw his future elsewhere so he left in January to go on loan to Getafe,” O’Neill told Radio Stoke’s Lee Blakeman.

“It didn’t go that well if I’m honest, he didn’t play that many games in the period that he was there, so as things stand at the minute, Peter is looking for opportunities elsewhere.

“The club are managing that situation and my understanding is that we’re quite close to an arrangement being in place for Peter.”

The Super Eagles midfielder had on Monday afternoon arrived Istanbul, Turkey ahead of his switch to Super Lig giants Galatasaray before heading straight to the club office at the Turk Telecom Stadium to put finishing touches to the deal.

Istanbul also had another Eagles star Henry Onyekuru on loan with them last season.
Galatasaray had initially confirmed ongoing negotiations with Stoke City and Etebo for the loan signing of the Super Eagles midfielder.

“Official negotiations with the football player and club Stoke City FC have started regarding the temporary transfer of professional footballer Oghenekaro Peter Etebo to our club,” the club had earlier tweeted.

Galatasaray, managed by former Turkish national team handler Fatih Terim finished sixth in the Super Lig last term and will feature in the 2020/21 UEFA Europa League.
A move to Galatasaray will make it Etebo’s fifth club in the last 36 months. He will be lining up alongside compatriot Jesse Sekidika in the Galatasaray colours for the new season.

Etebo missed Super Eagles friendly game against Brazil and Africa Cup of Nations qualifier matches against Benin Republic and Lesotho after he was taken out in the 24th minute of the encounter between Stoke City and Sheffield.

The injury was a huge blow for Stoke City as former coach; Nathan Jones blamed the loss to Sheffield on Etebo’s absence.

“To lose Etebo early was a big blow for us and then lose your centre-half, invariably the one that came on makes a big error for the only goal of the game,” Jones said after the game. Etebo suffered a muscular injury which will take a while to recover.”

Indeed, Super Eagles Manager, Gernot Rohr had admitted missing the services of Etebo who has not been part of the squad during the team’s last AFCON qualifying games.

“I hope everybody will be fit, we missed some players for the qualifiers like Oghenekaro Etebo and Bryan Idowu, who could not come,” Rohr had said.

Etebo started his career with Lord Honour FC youth team and then joined the Nigeria Professional Football League side Warri Wolves in 2012 where he spent three years before leaving for Europe.

The midfielder teamed up with a Portuguese club Feirense in 2016 and made 45 league appearances for the side before he signed for Stoke City in 2018.

Etebo featured for the Nigeria U-23 team and played a significant role as the West Africans clinched a bronze medal in the 2016 Olympic Games.

The 24-year-old made his Super Eagles debut against Ivory Coast in July 2013 and has since featured 35 times for the side.

Etebo featured for Nigeria at the 2018 World Cup in Russia and was part of Rohr’s side that finished third at 2019 Africa Cup of Nations in Egypt.

It however remains to be seen whether Etebo can revive his career in Turkey for an eventual recall to the Super Eagles in the coming months as the new season kicks off.