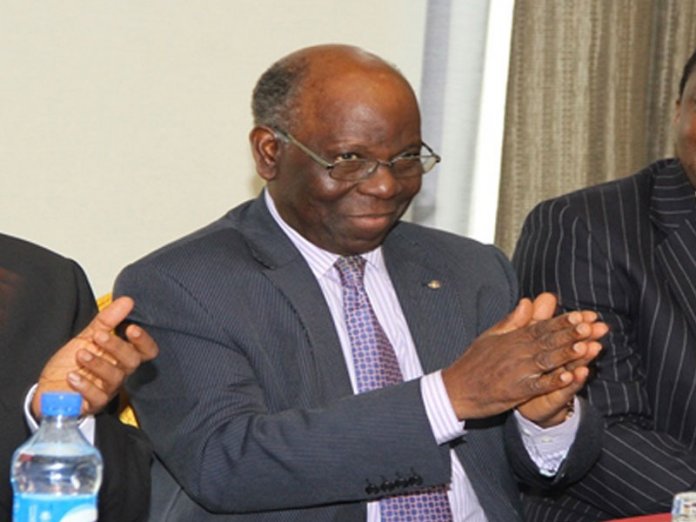 Some individuals, by divine providence, attract unsolicited fame. They work quietly and assiduously without expectation of recognition and commendation. They devote talent, energy and time to impact positively on humanity, to make the world a better place. But they are reticent about their achievements. These are great achievers that God creates for every generation, and like gold shine everywhere. In the timeless words of Henry Longfellow, “The heights by great men reached and kept were not attained by sudden flight, but they while their companions slept, were toiling upward in the night.” In the pantheon of silent achievers is the boardroom colossus, Chief Olusegun Oladipo Osunkeye, the Babalaje of Egbaland, Chairman, Osunkeye and Associates and Pilot Securities Limited, who will clock 80 on Monday, September 7, 2020. It is not a poetic excess to describe Osunkeye as a class in his own. He is the first among his equals, generous but prudent, a debonair persona but highly engaging with unassailable facts on any issue. The overriding factors that define his lifestyle and have put him on the public space for upward of 40 years are integrity, skills and perseverance. I had known him by reputation since my undergraduate days over 30 years ago. During my career at The Guardian, he remained one of the leading lights in the real sector. I became more familiar with his activities when I joined The Nigerian Stock Exchange in 1997. Nestle Nigeria Plc, under Osunkeye, was a global name. Due to Nestle’s consistent stellar performance under his leadership, the company won the much coveted The Nigerian Stock Exchange Annual President’s Merit Award several times. After I left The Exchange, our paths never crossed until I saw him at a classy wedding in ceremony in Lagos, of a daughter of one of his fans, the Founder of a flourishing Agricultural and Forestry Support firm, Mr Olawale Oyedele.

Immediately I introduced myself, he recalled and said “Sola Oni of The Nigerian Stock Exchange”. He was quite happy to see me, offered me his complimentary card and asked about my welfare. He was impressed that apart from being a financial journalist and Public Relations Consultant, I have become a Chartered Stockbroker. He said I should get in touch. Ever since, I began to have close access to him. Olusegun Osunkeye is a household name in Nigeria, yet he is not a noise maker. He believes that your work must speak for you. During my first visit to him in his serene corporate office at Ikeja, GRA, where his staff work round the clock, he served me tea and insisted that I was his visitor. He noticed that I was not comfortable with this approach and quickly educated me that it was not at variance with African way of treating a visitor, irrespective of age disparity. While we were drinking tea, I told him to let me write his biography. He smiled and said more than 10 people had made such a request but he turned down all. “Most of the biographies published and launched in Nigeria are dumped somewhere after the launching. Many Nigerians don’t cultivate reading habit. I really don’t see the need for that. It doesn’t affect my contributions to knowledge”. He showed me a copy of biography of one of the late Nigerian business moguls which was just delivered to him and asked rhetorically: how many Nigerians have patience to read this book? We discussed on granting interviews occasionally on national issues. “Sola, I don’t need any form of publicity. I enjoy my private life and I don’t want to discuss my family,” he said in a measured tone. He speaks with professional and intellectual candour on any subject. Ironically, the fearless Osunkeye, an unwilling newsmaker is a delight to every crack reporter. His appearance at any function often causes stir and automatically elevates the standard of the event. Despite his deliberate avoidance of publicity, Osunkeye cannot be ignored at any forum. He is generous and has an insatiable desire to uplift the downtrodden. He once told me how he joyfully paid an artisan N1000 for a service of N100. “I love to make people like him happy. The money meant a lot to him and his family. He was happy. He did not expect such. I pay every professional for the service rendered, no matter how close we are. I don’t overstretch my goodwill and I don’t believe in all these charity”, he told me and we both laughed.

Born on 7th September, 1940, at Agege , Lagos State, he attended King’s College, Lagos, 1954-58 and trained at Messrs Akintola Williams and Co. His erudition became more manifest when he was under the tutelage of Chief Akinola Williams who acknowledged him as the most engaging trainee at the time. Osunkeye later proceeded to College of Commerce, Wednesbury, England, 1963-65 and International Management Development Institute, Lawusanne, Switzerland, 1980. A defining moment of his career was 1965, when he recorded double victory for passing the final examination of ACCA and the finals of the UK Institute of Taxation. The iconic Chartered Accountant who spent 41 years of his robust working career at Nestle Nigeria Plc, was promoted Managing Director of the company in 1988 and emerged the Chief Executive Officer in 1991, the first Nigerian to hold the exalted position to date. His eight-year tenure as the Managing Director and Chief Executive Officer saw the company’s turnover grew from N609 million in 1991 to N7 billion in 1999, and profit before tax jumped from N98 million to N1.6 billion during the same period. His best-in-the-class performance won the heart of the company’s foreign investors, especially, from Switzerland and encouraged them to make significant investment in Nigeria. As a justification for Osunkeye’s positive influence on the foreign investors about Nigeria’s business environment and skills and competencies of its people, his boss, Alex Jost, had in a personal letter to him in 2010 said “…I often refer to my experience in your market, where the company (Nestle Nigeria), managed by you was able to – despite a hash business climate- to uphold in all respects a standard of quality which matched the best in the Nestle Universe…” Osunkeye retired as the Chairman of Nestle Nigeria Plc in 2013. He had also served as the Chairman, Larfage Africa Plc, GlaxoSmithKline Consumer Nigeria Plc, Manufacturers Association of Nigeria (MAN), Ikeja Branch; National Vice President, MAN; President, Society for Corporate Governance Nigeria and past President, Nigeria Employers’ Consultative Association (NECA), among others. Osunkeye as a corporate Prophet was not only revered outside his home, but by his own people. In recognition of his monumental contributions to Nigeria’s corporate growth and development, the federal government of Nigeria bestowed him with the National Honour of Officer of the Order of the Niger (OON) in 2003, Officer of the Order of the Federal Republic (OFR) in 2011 and Commander of the Order of the Niger (CON) in 2014.

He never allowed his functions in the corporate space to becloud his service in the ecumenical world. Osunkeye started as an altar boy at a very young age in Anglican Communion. No wonder, he was proclaimed and installed as a Diocesan Father of the Diocese of Lagos West in May, 2014. The philanthropist is happily married to his darling wife, Chief (Mrs) Abosede Osunkeye, his best friend and the distinguished couple had celebrated more than five decades of unblemished holy wedlock. Their children are all professionals of distinction, spanning banking, accountancy and stockbroking, pharmacy, marketing and law. On the social ladder, Osunkeye belonged to many topnotch clubs. But for the protocols of COVID-19 pandemic which has moderated social activities globally, Osunkeye deserves a red carpet and drum-rolling celebration. At 80, the ebullient Osunkeye maintains solid physical built, dresses corporate, still working, learning new skills in the age of new normal and participating in Zooms and allied meeting as well as social activities at an age when some of his contemporaries battle with senility. He does not only continue mentoring young ones, including his staff but serves as a facilitator at Lagos Business School of Pan African University, supports research at the University of Lagos and Ajayi Crowther University, where he is a foundation member of the Governing Council. A Chartered Insurer and one of his corporate apostles, Mr Oyedele, eulogized him in baritone: “We are privileged to be his students in corporate governance, boardroom ethics. The two lessons that I personally learnt from Chief Olusegun Osunkeye are: every problem has an expiry date and invest everything you have in patience. It pays at the end”. A timeless testimonial!

––Oni, PR Consultant and Chartered Stockbroker, is the CEO, Sofunix Investment and Communications