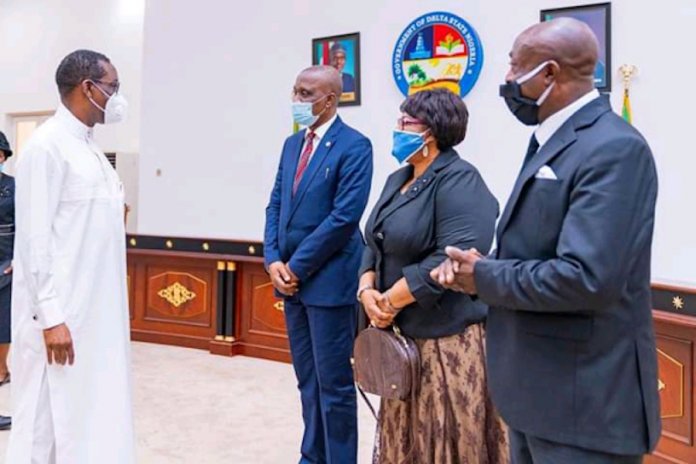 While congratulating the new judges on their elevation, Okowa underscored the point that their personal integrity and years of experience earned them the appointments and charged them to bring their wealth of experience to bear on their respective new assignment.

The governor also thanked the Delta State Chief Judge, Justice Marshall Umukoro and President, Customary Court of Appeal, Justice Stella Oghene, for their commitment to ensuring speedily dispensation of justice in the state.

With the appointment of the new judges, the Customary Court of Appeal in the state can now function more efficiently, he stated, noting that their number was few and sometimes difficult to constitute a quorum.

He reiterated his administration’s commitment to partnering the judiciary to ensure speedy dispensation of justice, adding that that arm of government would soon begin to operate in autonomous capacity as the legislative arm.

Okowa said, “We have continued as a state to ensure that we partner the judiciary to ensure that there is speedy dispensation of justice. So, I must appreciate those who kept the process going until the swearing-in of the new judges of the Customary Court of Appeal.

“I know that it is a difficult job you have been called up to do, but you have been appointed based on your personal integrity and years of experience and I expect that, that will be brought to play in ensuring the speedy dispensation of justice.

“There is no doubt that we are in very troubled times at the moment, but I am sure that you should be able to sit in your various courts in line with the COVID-19 preventive protocols that have been put in place by the NCDC and I hope that even in this difficult times that you will be able to attend to the cases that will appear before you.

“As judges, you do know that in all you do, you need to be firm, fair and resolute in the discharge of your duties and I am sure that as judges of the courts of Delta State, we will be proud of the judgements you give and that you give judgements without fear or favour.”

The governor restated the support of the state executive arm of government to the judiciary. “I want to assure the judiciary that we will continue to support it as much as possible to ensure the functionality of the judicial system in the state.

“It is important that we put on record that as a state, we have passed and signed into law, the Bill granting autonomy to the judiciary in the state and it is our hope that processes leading to the efficient take-off of the judicial autonomy will be put in place.

“I must say that it is something we are happy about and it is something we believe in, because the legislature in Delta State has been operating in autonomy since last year; and, it is my hope that the judiciary should be able to take charge of its activities.

“As governor, I have never had any complaint on miscarriage of justice and this is very commendable.”

Responding on behalf of new judges, Justice Dele Okafor thanked God and those who made it possible for them to be appointed as judges, assuring of their readiness to carry out their duties diligently in line with the statutes.