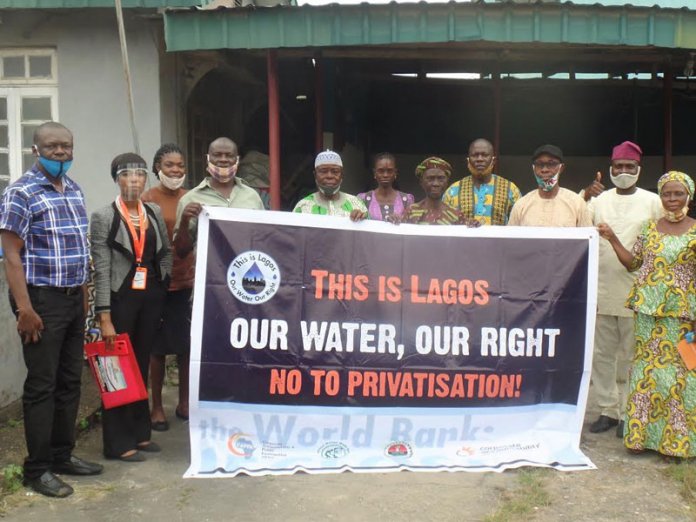 Communities in Shomolu and Ikorodu have urged the Lagos State government to urgently address the dire water situation in their localities that has made life unbearable for them.

The communities also want the state government to rehabilitate and make the waterworks in their domain functional so that they can access clean water for drinking and washing of hands as advised by the government to check the spread of COVID-19.

The communities amplified their demands when Corporate Accountability and Public Participation Africa (CAPPA) visited them in continuation of fact-finding visit to ascertain the level of intervention of the state government since the COVID – 19 pandemic began.
The group was in Pedro area of Shomolu on August 11 and Ijede in Ikorodu on August 27.

The engagement in Shomolu had representatives of the communities, youths, and women leaders in attendance.
CAPPA Associate Director, Olatunji Buhari gave a brief background of the organisation and Our Water Our Right Coalition which he said both started in 2014 and works to promote human right to water and challenge impediments to access.

Buhari explained that CAPPA recently launched a report on the status of waterworks in 11 local governments of the state, including Shomolu which was not producing water as at the time the CAPPA team visited on May 12.

He pointed out it was important that the community folks were speaking out and correcting the state government’s claim that they had provided water to meet their routine needs and checking of the spread of COVID-19.

Community representative, Olubukonla Oduwoye explained that the community lacked water, even as she added that her own apartment is usually the police station in the neighborhood that provides water for them from their borehole, which has also become rationed as there is no public water in the vicinity at all.

Another community representative, Elder Ugbabor, said it was unfortunate that even with the Shomolu and Bariga waterworks within their proximity, there was no water for use, hence most of the residents depend on unwholesome water sources.

When the CAPPA team visited Ijede community in Ikorodu the residents revealed that for upmost of 16 years the taps have been dry, and that most of them have resorted to using water from the river which was not safe for consumption.

They narrated how they frequent the hospitals due to the high incidence of water-related illnesses and the huge toll it was taking on their income.

In his appeal to the government on their behalf, Hon. Tosin Onamade said that constitutionally the government should provide them water. But unfortunately, this was not the case and it had forced residents to resort to self-help at great cost to their health and income.
Onamade appealed to Governor Babajide Sanwo-Olu to address their plight by ensuring that the waterworks in Ikorodu are rehabilitated and made to work optimally.

Earlier, CAPPA Programmes Director, Philip Jakpor, said water is a right and the United Nations has declared so, and such it is the responsibility of the government to provide clean and affordable water for the people.