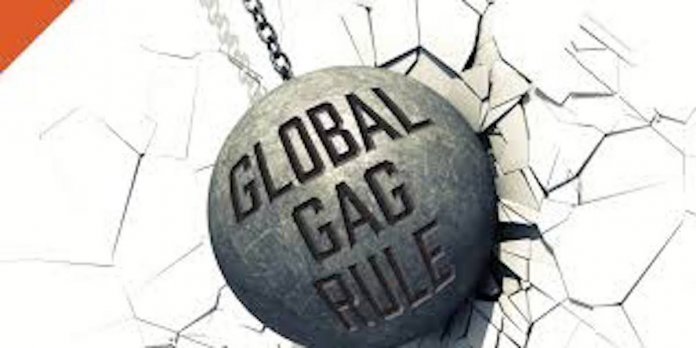 Nigerians, including the media, have been urged to join the campaign against Global Gag Rule (GGR).

The GGR prevents foreign organisations receiving United States global health assistance from providing information, counselling, referrals, or services for legal abortion or advocating for access to abortion services in their country, even with their own money.

First introduced by President Ronald Reagan in 1984, GGR was reinstated and expanded by President Donald Trump in January 2017. According to Planned Parenthood Action, GGR, as it currently stands, targets international organisations that work on any programmes funded by US global health assistance, including programmes to expand access to contraception, prevent and treat HIV/AIDS, combat malaria, and improve maternal and child health.

In a communiqué issued at the end of a three-day media sensitisation workshop on GGR and its implications on Women’s Sexual Reproductive Health and Rights (WSRH&R) in Nigeria, organised by Ipas, participants noted that GGR contributes to the high maternal mortality rate in Nigeria.

Participants at the three-day Ipas workshop observed that many Nigerians, including CSOs, were not aware of GGR and its effects on WSRH&R.

They therefore called for a rigorous awareness on the exceptions to GGR, to enable CSOs provide services to victims of unwanted pregnancies as a result of rape and incest, among other exceptions.

Participants at the workshop also called on the media to join the global campaign against GGR and step up support to NGOs working on WSRH&R.

While calling on government at all levels to increase funding for WSRH&R, the participants demanded that government should provide free medical care and support for women and girls who are victims of sexual violence to preserve, promote and protect their sexual and reproductive health.

“It is the right of patients to be accorded highest standard of competence, professionalism, respect, confidentiality, privacy and non-discrimination in the course of health service delivery and such should be demanded where it is lacking,” the communiqué said.

Lamenting that less priority is given to the health sector in the Nigerian budget, the workshop urged government at all levels to take the health of women as priority.

The workshop advised that focus should not only be centred on the Executive arm of government but on the Legislatures as well, to ensure they make legislations that promote and protect WSRH&R.

Various topic discussed include: The 4 Corner VCAT; Introduction to Women Sexual Reproductive Health and Rights; Burden of Maternal Death from Unsafe Abortion in Nigeria; Contextualising the Global Gag Rule; Exceptions in the GGR & Its Implication for Women & Girls in Nigeria; CGR & Implications on Health & Rights of Women; Unseen hands and Consequences of Sexual Violence; VAPP Act: A Tool for Media Advocacy; and SWOT Analysis of the Media in Reporting WSRH&R.

Participants at the workshop had breakout sessions where various scenarios on Women Sexual and Reproductive Health were considered.