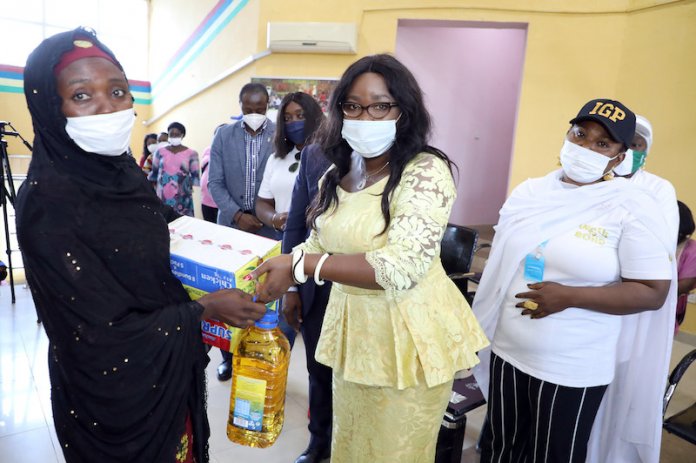 Olawale Ajimotokan reports on the provision of palliatives and the offer of capacity building by the Abuja branch of a women NGO in support of police widows, whose husbands were killed in line of duty

The NECA’s Network of Entrepreneurial Women (NNEW) exhibited humanity and fulfilled its corporate social responsibility recently when it provided succour to 90 widows of some policemen, who were killed during active service to the country.

All the beneficiaries gathered at the multi- purpose hall of the Police Officers Wives Association (POWA) secretariat in Abuja, to receive the palliatives jointly provided with the Nigeria Breweries.

The occasion also had in attendance the wife of the Inspector General of Police, Hajia Fatima Adamu and the wife of the FCT Police Commissioner, Mrs Fatima Ciroma and some spouses of senior officers of the police service, including wives of the DIG Operations, Hajia Idiat Ali and DIG Supplies and Logistics, Mrs Comfort Baraya.

NNEW was established in 2005 as a cooperation project with the objective of promoting entrepreneurship among women in Nigeria. It provides its members with access to information on business and socio-economic matters, opportunities for capacity building through training and finance through business promoting organisations.

The NGO was represented at the ceremony by its Vice President, Mrs Jacquelyn Olua and Secretary, Mrs Adeola Remi-John.

Olua, who spoke on behalf of the President, Mrs Amina Zanaka, said NNEW decided to provide palliatives to POWA because it recognised the gallantry of the policemen who lost their lives while in active service and the need to cater for the widows they left behind.

She noted that apart from handling out palliatives to the widows, the NGO is also hoping to train the women so that they will be in position to sustain themselves even further.

Olua said that NNEW is also planning to conduct capacity building and evaluate the widows’ financial status to see how loans can be advanced to them.

”NNEW was established by a group women to encourage and empower women to prosper in entrepreneurship in order to raise their social economic standard and to affect the community. We decided to empower the widows with palliatives during the current pandemic as we dont want them to feel left behind in this period.

“In addition, we want the widows to be in position to provide a living for themselves economically. We are grateful to NBL for recognising what we have been doing among women and in turn deciding to reach out to the widows,” Olua said.

She added that the NGO is out to assist women to build their esteem and to engage in business and other ventures legally to be able to sustain themselves economically and prop the society.
Some of the widows, thanked the NNEW and NBL for the gesture, which they said will benefit their families.

One of them, Mrs Ali Isa Ibrahim, who hawks kerosene at Karamajiji at Airport Road, Abuja said she would appreciate if the gesture can be constant, as that would enable her to adequately fend for her two children.

Her gesture was reinforced by Easter Nancy, who resides at Mopol Barracks, Abuja. Easter sells a local drink called Kunu and is catering for three children, following the death of her husband.

The Head External and Public Affairs, NBL, Uzodinma Odenigbo, thanked POWA for giving them the platform to reach out to widows of the servicemen, who have paid the ultimate price with their lives.

He also appreciated the support of the group of professional women entrepreneurs for making this possible, while promising to partner with them in future endeavours.

”NBL which has been in existence for over 74 years has not lost the fact that we could not have been existing without the support of Nigerians. This is why we recognise that this is an opportunity for us to stand with all Nigerians cutting across the country.

”We also recognise that the pandemic has had very harsh effects on the country. We are only coming out of the lockdown, which has affected economic activities and we resolve to promote many initiatives in support of Nigerians in many locations across the six geo political zones,” Odenigbo said.