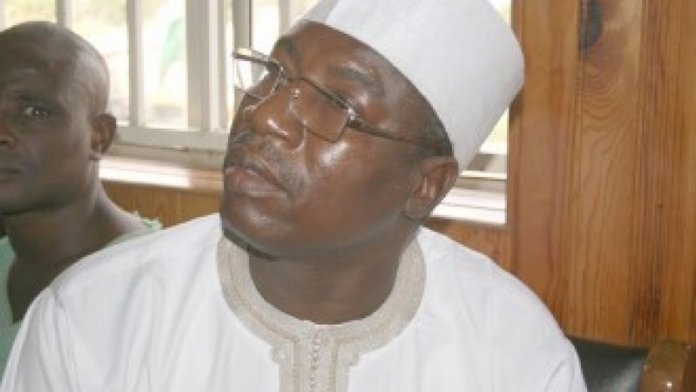 In the Supreme Court of Nigeria
Holden at Abuja
On Friday, the 8 th day of May, 2020

The Appellant was charged before the Federal High Court sitting at Yola, Adamawa State, for the offence of unjust enrichment under Section 1(2)(b) of the Miscellaneous Offences Act 2004 (MOA, 2004). The Appellant was the Commissioner for Local Government and Chieftaincy Affairs in the Adamawa State Executive Council, under the administration of Governor Boni Haruna. In that capacity, he was the Chairman of the Adamawa State Local Government Joint Account Committee (LG-JAC) which was responsible for the approval of Joint Local Government Projects, and voted funds for the execution of the same. The Appellant was at the same time, the Chief Executive Officer of Al-Akim Investment Nigeria Limited (the 3rd Accused Person) and the sole signatory to the account of the company maintained with Guaranty Trust Bank Plc (GTB).

The LG-JAC had approved and appropriated the sum of N31.5 million to assist the Independent National Electoral Commission (INEC) in its voters registration exercise, and the sum of N21 million for the purchase of vaccines for Local Governments in the State.
The Respondent alleged that the Appellant diverted the sums that were appropriated by the LG-JAC, into the GTB account of his company, Al-Akim Investment Nigeria Limited. It was also alleged that the said sums were subsequently transferred by the Appellant into the GTB account of a certain BBB Project, which was operated in the name of Mohammed Inuwa Bassi (the 1st accused). The said BBB project account had the name and photograph of the 1st accused on the mandate card, but had on the same mandate card as the sole signatory thereto, Governor Boni Haruna. It was the case of the Respondent, that neither BBB Project nor Al-Akim Investment Nigeria Limited did any job for the Adamawa State Government, to warrant being paid the said sums.

Issues for Determination
In the Appellant’s Further Amended Brief of Argument, he formulated his issues for determination which were considered by the Apex Court as follows:

1. Whether Counts 3 and 4 in the Respondent’s amended charge was not incompetent, for not disclosing all the essential ingredients and the detailed nature of the offence for which the Appellant was charged.

2. Whether the Respondent proved the commission of the offences by the Appellant, beyond reasonable doubt.

3. Whether the Court of Appeal was right, when it held that the trial court did not wrongly admit inadmissible documentary evidence to convict the Appellant.

4. Whether the order of restitution made against the Appellant for offences that were committed in 2002 was justiciable under Section 319 of the Administration of Criminal Justice Act, 2015, which it was made pursuant to.

5. Whether the judgement of the trial court delivered after 90 days from the date of final addresses, did not occasion a miscarriage of justice on the Appellant.

Arguments
On the 1st issue, counsel for the Appellant argued that Counts 3 and 4 in the Respondent’s amended charge, failed to disclose the ingredients of the offence for which the Appellant was charged. He submitted that, forgery is a vital element of the offence under Section 1(2)(b) of the MOA, 2004, but it was omitted from the counts, hence the counts were incurably defective.
On the 2nd issue, he argued that the allegations laid out against the Appellant were not proved beyond reasonable doubt, to warrant the lower court affirming the conviction of the Appellant.

On the 4th issue, he argued that the order for restitution made by the trial court pursuant to Section 319 of the Administration of Criminal Justice Act, 2015 could not be validly made against the Appellant, as the law was not in existence at the time of the alleged commission of the said offence in 2002.
On the 5th issue, he argued that the judgment of the trial court which was delivered more than 90 days after final addresses occasioned miscarriage of justice on the Appellant, and ought to be set aside.

Court’s Judgement and Rationale
On the 1st issue, the Apex Court held that a court, when interpreting a statutory provision must give the words and language of the statute their ordinary meaning, without venturing outside the provision to introduce extraneous matters that may lead to giving the provision an entirely different interpretation from what the law maker intended it to be. The Court held that, while Section 1(2)(a) & (c) MOA have mens rea elements of forgery stated in them, Section 1(2)(b) under which the Appellant was charged was worded differently and unjust enrichment is the substance of the offence thereunder. Counts 3 and 4 each alleged the substance of the offence of unjust enrichment, as they harp on the intent of the Appellant to defraud the Government of Adamawa State.

On the 2nd issue, the Court held that to prove the offence of unjust enrichment under Section 1(2)(b) of the MOA, 2004, the prosecution is only required to establish that the accused person, with intent to defraud the Government of a State, falsely caused the payment/delivery, to himself or some other person, property or money belonging to the Government. A person is said to have done a thing with intent to defraud another, when he does the thing with intent to deceive and by means of such deceit to obtain some advantage for himself or another, or to cause loss to any other person.

The Court held that, it was established that the Appellant as the Commissioner for Local Government and Chieftaincy Affairs and the Chairman of the LG-JAC, authorised the diversion of the total sum of N52.5 million from LG-AC’s account to BB Project, through his company’s account.
The Court held that, it was also proved that neither Al-Akim nor BB Project had done any project for Adamawa State Government to warrant payment of the sums to them, and the monies were diverted to gather funds for re-election of Governor Boni Haruna, as the monies traced to the BB Project account were all withdrawn through cheques signed by – His Excellency Boni Haruna. The intent to defraud Adamawa State as well as other ingredients of the offence were thus, established against the Appellant beyond reasonable doubt.

On the 3rd issue, the Court held that where the original document of a public document is available, it is admissible without the requirement for its certification. Relying on Section 83(1)(b) of the Evidence Act, 2011, the Court held that the condition that the maker of a document shall be called as a witness need not be satisfied if he is dead, or unfit by reason of his bodily or mental condition to attend as a witness, or if he is outside Nigeria and it is not reasonably practicable to secure his attendance, or if all reasonable efforts to find him have been made without success.

The Court held that, the Appellant conceded the death of the Permanent Secretary who made Exhibits PW. 7A and PW. 7B. Hence, he could not be called to testify as the maker of the documents. Also, PW7 who had personal knowledge of the instructions his bank had regarding the two Exhibits, testified. The Court of Appeal was right to hold that, the Exhibits were rightly admitted in evidence by the trial court.

On the 4th issue, the Court held that the rule that a statute must not ordinarily be construed to give it retrospectivity so as to impair or take away vested right, has no application to statute that is purely procedural. Relying on its decision in OJOKOLOBO v ALAMU (1987) 7 SC 124 that statutes which make alterations in procedure are retrospective, the Court held that Section 319 of the ACJA is a procedural provision, merely for purposes of equity and substantial justice and to avoid multiplicity of actions, which permits the criminal court to make a consequential order of restitution in favour of the victim of a crime. It could therefore, apply retrospectively.

On the 5th issue, the court held that the burden of proof is on the party alleging miscarriage of justice to show the miscarriage he suffered, and in deciding a miscarriage of justice as a result of the delay between the conclusion of trial and delivery of judgement, the emphasis is not on the length of time simpliciter, but on the effect that it produced in the mind of a Judge. Thus, if the evaluation in evidence bears the mark of freshness and the findings of fact are supported by credible evidence, then the Court’s judgement will not be set aside. The Court held that the Appellant failed to show how the delay affected the trial court’s perception, appreciation and evaluation of the case, to have occasioned a miscarriage of justice on him.

Andrew M. Malagwi Esq. and others for the Appellant.

Samuel Okeleke Esq. for the Respondents.

“The rule that a statute must not, ordinarily, be construed to give it retrospectivity so as to impair or take away vested right has no application to statute that is purely procedural….. Section 319 of the ACJA is a procedural provision”