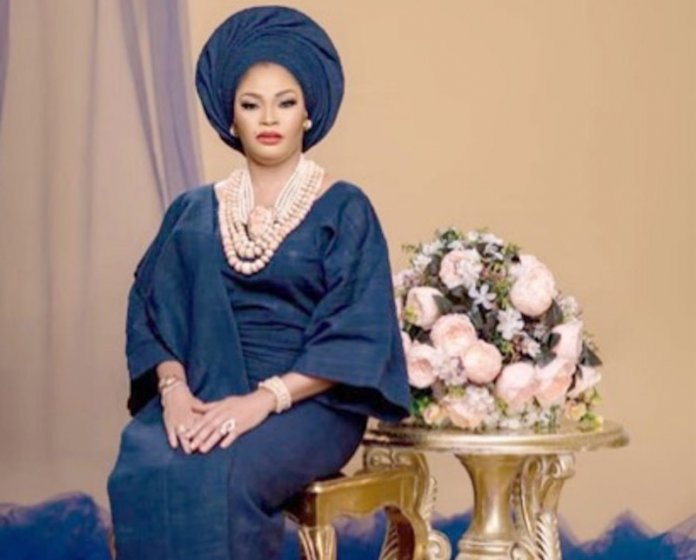 Sekinat is the wife of Oba Saheed Elegushi, the 21st monarch of Ikate-Elegushi, in Lagos State. Olori Sekinat, a mother of three, is renowned for her humanitarian work across the state. The queen of Ikate-Elegushi talks with Azuka Ogujiuba about her relationship with the Kabiyesi and their love trajectory. She also sheds light on her foundation, QSE Foundation, which caters for women and children and her position on sexual violence

How would you describe your style?

I don’t think there is any special definition for my style. I have just been stylish from when I was young and while still in school because I like to look good and dress up in anything good.

How do you combine all your looks? Do you have a beauty team?

No, it’s just on my own. I just love to always look good without the help of any stylist or assistance. I don’t have anybody. It’s just me. I create my style for my designers to make. I come up with the colour and the mood for the event or party I am getting ready for. My designers knows that when they are done with my cloths, I’ll ask them to bring it to me and still do some touches to make it come more alive and pleasant for the eyes. I don’t like to copy what someone else has done and even if the need arises, I’ll still look for another way to make it look more original.

You have added glamour to the looks of an Olori…

Well, it is just to add some new concept. I don’t really like the traditional Iro and Buba. So, I just change the sleeves. If you noticed, anytime I wear Iro and Buba, there is always some difference from the regular ones.
You can work as a fashion designer with all what you have explained

Yes, I can but my husband, the king will not allow me.

You are one of the most stylish queens in Nigeria. Has anyone inspired you among older queens?

I just try to create my own style but over the years, I liked Olori Ladun Sijuade and the Tejuosho Oloris.

What was the attraction to your husband the king and how did you meet?

We didn’t meet in school as some reported. We met at my mum’s shop in Lagos Island, precisely the popular Moshalashi Jimoh fabric market. He had a friend close to my mum’s shop at that time and I’ll just come to stay at my mum shop when I am on holiday and he just approached me suddenly like that and I turned him down. I tried to avoid so many of the young men around that area then. So he went to meet his friend that he saw one fine young girl that wore glasses and reading magazine and the friend told him not to come closer because he knows I’ll not respond to him but he summoned courage. We became friends, we see often, we gist and play. I actually find him funny and jovial. As we went on, he later asked that we start dating; and I said ‘I thought we are friends already, what else do you want?’ Of course I liked him already, so I couldn’t resist for much. It may interest you to know that I didn’t even know he was a prince and from there we started moving together. I remember he once convinced me to ride a Molue, something I never did because I had a car. He took me to board a molue, it was even so full that I had to sit on his laps!! It was weird but I liked the experience and it formed part of our memories of growing and developing together. I think I even lost a jewel during the molue ride!

At what point did you guys know you would get married?

I just knew because I had to take him to my dad to introduce him as my boyfriend and he was stunned, asking me all those questions a parent would ask. I reminded him I was in my final year at the university. So I should have a boyfriend. At that time, he was already on NYSC, outside Lagos. When he came back after three months, we knew what we wanted and we were ready to get married. My dad was not in a rush, so gave me another month to think through it. After a month, I went back to him that we were ready to get married and the marriage plans started. My father was even particular about where we will be living because we are still young. We had a big wedding; you know what you people call society wedding. We started from there and today, we thank God for how far we have come.

What were the attractions to Kabiyesi that made you decide to marry him?

Does he have a nickname he calls you?

We all call ourselves SA cause it’s our initials – Sekinat Aramide and Saheed Ademola. All our children bear the same SA initials – Sofiat Adeteniola, Soliat Ademide and Sarina Abisade. so we all have the same initials.

I’m not much of food person like that but I would say Dodo.

How has it been as a queen for over 10 years?

It was a bit difficult at the beginning. I remember when he told me he was to be made king, I was begging him not to take it; that I don’t want and he told me I would be fine and part of my fears was him taking another wife but which finally happened. I was even pregnant with my third child at the time he was crowned and I had to come back early after birth to be with him. It was a bit challenging from the beginning, as there were many demands, which I wasn’t used to but since I was familiar with some of the palace processes and the people there, we were able to settle down and 10 years after, we thank God for how well we have come.

When you heard about your husband marrying a second wife, how did you take it?

It was a tough one for me at that time and because I just lost my mum and I had to manage. It was really hard at that time; but some of these things come with the demands and pressure of the throne. I can’t continue to worry about it. The moment he became a king, I knew things like that will spring up. But you know I didn’t marry a king, I married a young man, that I love and we were growing together, managing and planning. Then the kingship fell on him, I had no choice but to support and stand by him. So here we are. All is fine. We are good.

When you are not busy, how do you relax?

I sleep a lot; I would say sleeping is my hubby.

Who is your favourite designer?

Ha! I don’t have any I just love everything good and nice.

What’s your take on violence against women and advice to abused women?

Domestic violence, especially violence against women is what I frown at anytime I am able to add a voice. I don’t encourage women to stay in abusive relationships under any guise. Anyone in an abusive relationship should rather run to stay alive than dying prematurely. I also wish that we could have stronger laws to punish offenders, as this will serve as a deterrent.

How long has your QSE foundation been and what do you cater for?

Well, I have been involved with different charities for over five years, supporting their activities and giving back to the society. About two years ago, the need to have our own platform became more important and that was how QSE Foundation came to life. We desire to give Quality and Selfless Empowerment (QSE) to our women and also support their children. We are doing that and we thank God that we are able to achieve our goals.

What’s your greatest fear in life?

Death is it but I thank God for his abundant mercy and grace. My husband, my girls and family are all doing well.

Is there anything you still desire in life?

I pray for long life to see my husband continues to do well, his kingdom peaceful and developing. I pray to see my girls achieve great feats and become great women in the larger world. In the area of style and fashion, I want to start producing my own perfume and sell them to the bigger market and I also plan to open a fabric shop too, which is to continue the legacy of my mum. I also pray I am able to achieve more with the Foundation. We want to reach as many vulnerable women as possible within and outside our kingdom. I hope to be part of a society where women, regardless of their social or marital status are not allowed to suffer.

editor - September 30, 2020 3:23 am
38
There is hardly any country in which nation-building is a finished business. To build a nation its people under a leadership with a sense of...

An Appeal for a New Order