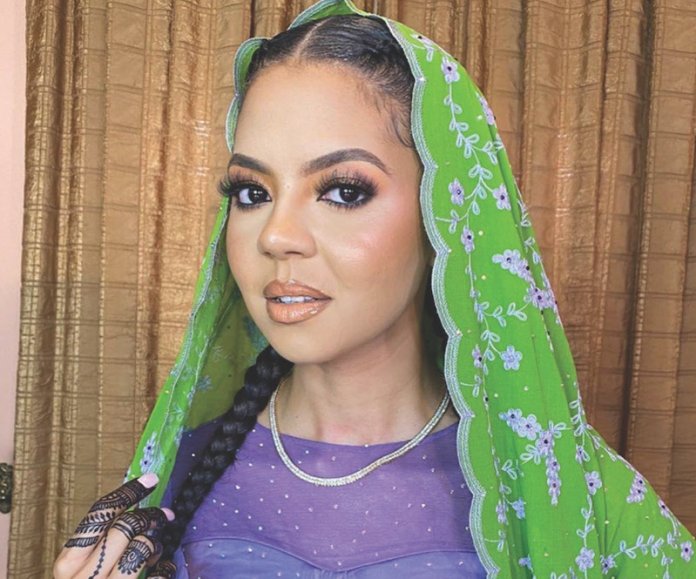 Adama, the flamboyant daughter of Maiduguri billionaire, Mohammed Indimi, has finally married tycoon Kogi Prince, Malik Ado-Ibrahim. The lovebirds dated for over year before deciding to get married. The Henan night held in Maiduguri, August 7 while the Nikkai took place the following day.

Ferdinand Ekechukwu captures all the showiness at the ceremonies

Islam stretches across a diverse terrain of politics and culture and a common feature of the Islamic religious obligation is marriage. A gathering of such Islamic marriage is replete with beauty in ways which accords the ceremony its respect. It was such observance that played out at the Nikkai (wedding) ceremony of billionaire daughter, Adama Indimi, and rich Kogi Prince, Malik Ado-Ibrahim, at her father’s palatial home in Maiduguri, Borno state on August 8.

It was celebration galore for two wealthy and popular families from the Northern part of Nigeria following the joining of their son and daughter as husband and wife. The traditional marriage rites of the couple commenced on Friday, 7th August 2020 with the Salalle ceremony in keeping with their kanuri tradition.

Adama’s father is an oil magnate and chairman of Oriental Energy Resources, while her husband is the founder of Bioernergy. Malik is the heir of the Ohinoyi of Ebiraland in Kogi Central, HRH Dr Ado Ibrahim.

Malik was accompanied to receive his bride by other members of his family. Adama and Prince Malik dated for a little over a year before making the decision to move their relationship to the next level. Photos and videos from the ceremony trended on social media while the ceremony lasted and it was replete with visual spectacle. Another interesting video captured the moment some women were washing the hair of the new bride as they sang in unison. Similarly, some family members and guests present posted photos from the ceremony using the hashtag: #shesaidiado. The bride’s parents have also been documenting and prattling about the bride on their Instagram handles with the hashtag #shesaidado.

Light skinned Adama Indimi is half Nigerian and half Swiss-Chadian. She’s is a model and runs a travel agency, Kauna Solutions. Her mother is half Swiss and half Chadian. Adama studied at Lynn University Florida, USA. She was first noted in the news when she dated music star – Dabnj – some years back. Some months ago, Adama celebrated the birth of her sister’s son with a heartwarming post shared on her social media page.

Malik was born in Nigeria, educated in the UK and US and has a strong background in automobile. Adama’s lover is the CEO and Chairman of Nigus Enfinity, a company in collaboration with BYD of China. He is famous for his role in the F1 design. He once owned Arrows, an F1 team. Malik was the first black man to work in Formula 1 and also worked for Hyundai for 6 years. Since he left Formula 1, no black man has been able to replace him. He was among the most interesting characters to tread the grand prix paddock. A man whose true reasons for immersing himself in grand prix racing were still not entirely clear almost 20 something years after his involvement both began and ended.

Malik has been involved in the automotive sector since early 1990s had worked with Proton and Lotus and helped them to develop the position of Lotus by the Malaysian government on 1999. In late 2000s, he began to focus on renewable solar, hybrid, and started looking at the possible ways to develop non-hydro carbons based global economy. He is the one behind the construction of 100 megawatts power station in Katsina State from solar and also the building of 100 megawatts in Adamawa which go directly into the grid.

In 2016, his company, Nigus Enfinity, did the first solar show in NNPC and NNPC the helped pushed the agenda of the firm by exposing renewables to the Nigerian market and was successful at the end. Since then, Nigus Enfinity has been involved in renewable projects in South Africa and in the UAE. As developed countries like UK and France declared their intention to go off hydro carbon by 2040, there would be no more hydro-carbon energized cars, as internal combusting engines will be no more; he has declared his readiness to flood Nigerian market with electric cars anytime soon.
Last Thursday, shortly after their wedding, Adama paid a thank you visit to her father-in-law, the Ohinoyi of Ebiraland, Ado Ibrahim, in his palace. She was accompanied by her hubby, Malik.