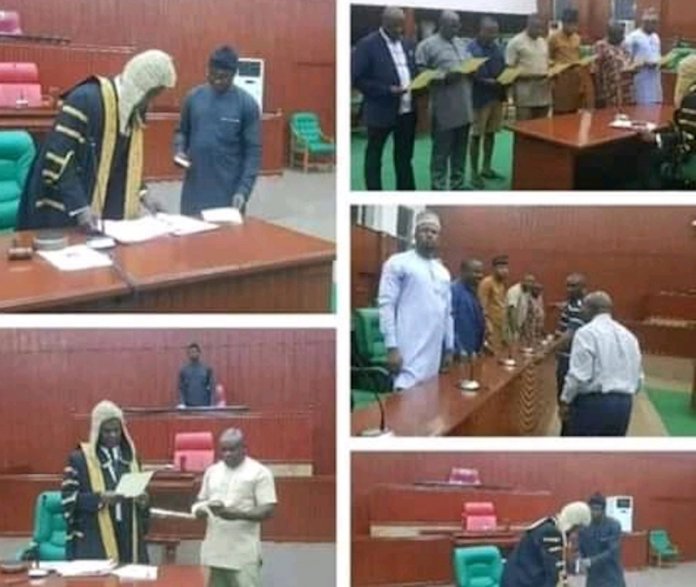 The political impasse in Edo State which previously peaked as Governor Godwin Obaseki switched political party loyalty from the All Progressives Congress (APC) to the Peoples Democratic Party (PDP), took another dramatic turn Thursday when legislators loyal to the immediate past governor of the state, Adams Oshiomhole laid claims to the leadership of the Edo State House of Assembly.

The latest twist is a planned retaliation from the 14 Edo lawmakers who are yet to be sworn in. This group of legislators on Thursday elected Rt. Hon. Victor Edoror of Esan Central Constituency as the Speaker of the Edo House of Assembly in an emergency plenary session attended by 17 elected members.

They claimed to sworn-in all elected members-elect and perfected the impeachment of Hon. Frank Okiye and Hon. Roland Asoro as Speaker and Deputy Speaker respectively.

However, Special Adviser to the Edo State Governor on Media and Communication Strategy, Crusoe Osagie described the action of Edoror-led Edo legislators as a “failed takeover bid”.

According to Osagie, “The APC is panic-stricken by the huge crowd of supporters in the campaign train of Governor Godwin Obaseki, candidate of the Peoples Democratic Party (PDP) in the forthcoming election, and resorted to the devilish plot to illegally hijack the legislature, inaugurate a parallel assembly and possibly impeach the governor.

“To the glory of God, their plan failed. What the APC has failed to understand is that in the hearts of millions of Edo people, Obaseki has become a movement, beyond a candidate that is seeking reelection.”

The governor’s aide assured that “Edo people will resist anything short of a free, fair and credible election, come September 19.”

He added: “We expect more shenanigans from the APC, no matter how absurd, in the coming days, as we move closer to the September 19 date, when Edo people will reaffirm their confidence in Obaseki with their massive votes.”
Mr. John Mayaki, Spokesperson for the APC gubernatorial candidate in Edo State, Pastor Osagie Ize-Iyamu quoted Edoror saying he will focus on legislative duties, and not pursue the impeachment of any member of the Executive.

He called for unity and togetherness, stating that there was no victor, no vanquished.

Edoror also enjoined the Edo Commissioner of Police, Mr. Johnson Kokumo, the Inspector General of Police, and other security agencies to eject the thugs who have invaded the Assembly Complex in Benin to allow for a rancour free plenary on Friday, August 7.
Meanwhile, Ize-Iyamu, has congratulated Edoror, describing his emergence as the end of a deformed and lopsided democracy.

In a congratulatory message signed by Mr. John Mayaki, the Chairman of the APC State Media Campaign Council, Ize-Iyamu said the emergence of Rt. Hon. Victor Edoror as Speaker is a victory for Edo State and all constituencies previously denied representation.

He said: “I am happy to receive the news of the emergence of Rt. Hon. Victor Edoror as the Speaker of the Edo State House Assembly.”

“His emergence marks an end to a lopsided and deformed democracy, ushering in a new and reformed era of inclusive governance and non-discriminatory politics.”

“Rt. Hon. Victor Edoror’s emergence is also a victory for the people of Edo State, for the constituencies previously sidelined, and for the House-members’ elect who had been unfairly denied their elective right to represent their constituencies in government.”

“Personally, as someone who has known Rt. Hon. Victor Edoror for a long time, I am convinced by the great personality he is; I am sure that this joy sweeping across Edo as the shackles of tyranny breaks today, will not be temporary.”

“As a true democrat and a progressive, and as someone who came to leadership through and after a tomentous and elongated period of political persecution, Rt. Hon. Victor Edoror knows the sour taste of injustice and as such would not let any one more Edo person experience such bitter tang.”

“Backed by an overwhelming majority, Rt. Hon. Victor Edoror is demonstrably the people’s choice for the position. And it is in line with common sense that for an individual to sway such massive support, he must have demonstrated great qualities admired and necessary for leadership and development, and as such is being trusted with the enormous task of piloting the House from its darkest moments as cast into by the reprehensible divide-and-rule politics of the outgoing Governor Godwin Obaseki.”