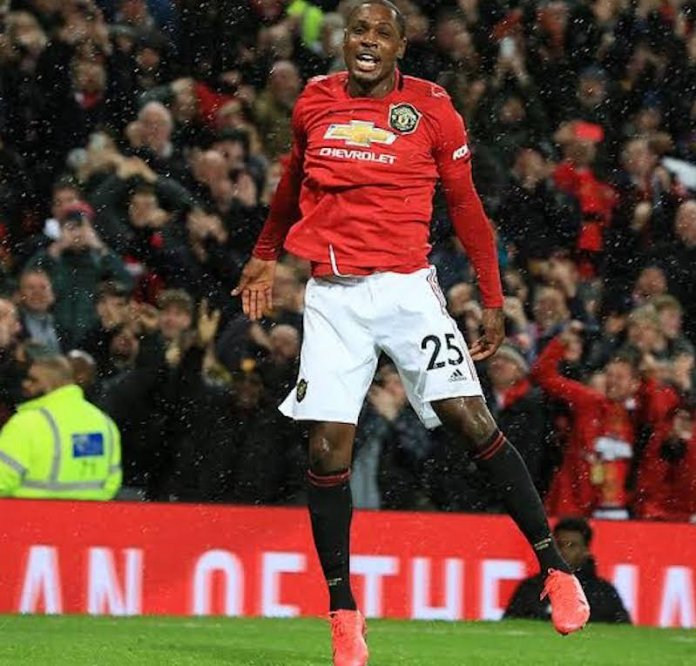 Former Super Eagles forward, Odion Ighalo, has been listed in Manchester United’s 30-man squad for the knockout phase of the Europa League.

The Shanghai Shenhua star in the Chinese Super League on loan at Old Trafford till end of January is likely to be in action this evening against Austria’s LASK in the Last -16 second leg clash in Manchester.

In the list of United players for the restart of the second tier UEFA competition posted on the club’s website on Tuesday morning, the AFCON 2019 top scorer kept his place as he hopes to get on the scorers’ sheet again today like he did against the Austrians just before the lockdown in March.

Only two players are missing from the previous line up. They are injured Luke Shaw and Axel Tuanzebe.

In the 30-man list are: Four goalkeepers, 10 defenders, 11 midfielders and five strikers.

The Nigerian international is competing with Mason Greenwood, Anthony Martial, Marcus Rashford and Tahith Chong for a place in the starting lineup.

Since joining United on transfer deadline day last January, Ighalo has been involved in all the matches played by the Red Devils in the Europa League, scoring two goals and providing an assist.

Ighalo’s stunning strike against LASK on March 12 won him Manchester United’s Goal of the Month award for March 2020.

Meanwhile, Solskjaer has confirmed that there is likely to be plenty of changes to the Manchester United starting XI when the team resume their campaign this evening against LASK.

The Reds boast a healthy 5-0 advantage from the first leg in Linz and the Norwegian said the team he selects for the second leg against the Austrians is likely to be similar to the one that earned that lead – although he confirmed there would be at least one change.

“Jesse (Lingard) will be starting on Wednesday (today), but the team won’t be too different to the last time we played LASK away in March,” said the Norwegian.

“We know that it will be a difficult game. It wasn’t a 5-0 game (in the first leg). We scored three goals in the last five, so of course we know that we have to perform. There’s opportunities for players (who do well in this game) to play in the quarters if we get through.”

Only Harry Maguire, Bruno Fernandes, Greenwood and Ighalo were involved in both Manchester United’s last Premier League game and the first leg against LASK, so there are likely to be plenty of alterations.

If United successfully navigate the second leg against LASK, and ensure their 5-0 lead is not overturned, Solskjaer’s team will travel to Germany for the mini-tournament that will complete the 2019/20 Europa League.

The Reds will play either Istanbul Basaksehir or Copenhagen in the last eight, in a game which is scheduled to take place at the Koln Stadion on Monday.

United are likely to face one of Olympiacos, Roma, Sevilla or Wolverhampton Wanderers in the semi-final.

Both semi final and final are due to take place in Cologne.