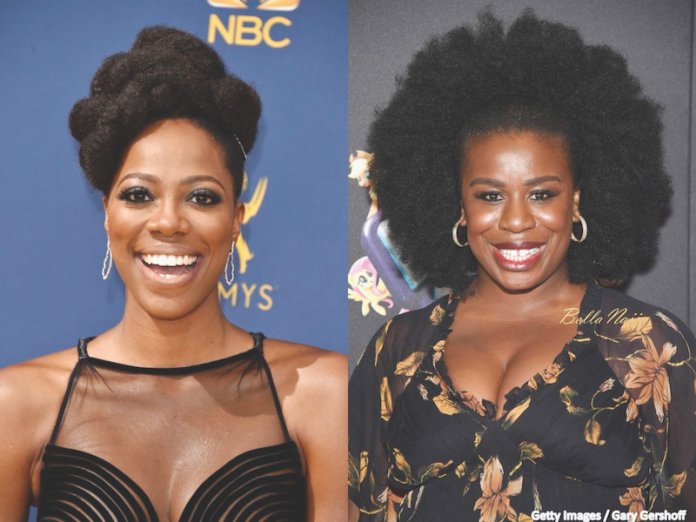 Three Hollywood actors of Nigerian descent, Yvonne Orji from “Insecure”, Uzo Aduba from “Mrs. America” and Jovan Adepo from “Watchmen” are on the list of nominees for the Emmys 2020. Ferdinand Ekechukwu captures the celebration in the camps of the thespians

Most people know Yvonne Orji, the Nigerian-American actress and comedian as Molly Carter, the driven but self-sabotaging sidekick to Issa Rae’s protagonist on “Insecure,” America’s HBO’s breakout show about black millennial friends in Los Angeles. Yvonne’s energy is contagious. The 36-year-old star possesses vibrant presence onscreen with her witty, confident, and wildly unlucky in love character, Molly Carter. Yvonne is endlessly watchable. But away from the cameras, Yvonne is even funnier.

Yvonne earned her first-ever Emmys Awards nomination for her role as Molly Carter in the series “Insecure”, with her nomination in the category of outstanding supporting actress in a comedy series ahead of the 72nd annual Primetime Emmy Awards. TV’s biggest and most coveted nominations were announced last Tuesday and she called her parents to inform them of the good news.

Elated Yvonne took to twitter to reflect on her nomination, writing, “I know Molly stressed y’all the heck out this season, but shout out to all of you for riding with @insecurehbo and for voting!! We in here! And it’s even sweeter when the whole squad thrivin too! to @IssaRae on her Emmy nod, the entire show, and @BlackLadySketch!”

She also posted a video of herself sharing the exciting news with her parents on Instagram, and they were beaming with pride through the phone. “Mummy, daddy, I have good news.” Yvonne began in Igbo. She went on to tell them that she had been nominated and shared her parents’ reaction with the world. She also happily told them that her co-star, Issa Rae was nominated for outstanding lead actress in a comedy series. The actress/comedian became emotional when her parents who never wanted her career choice told her that they were proud of her.

Interestingly, for the first time, three Hollywood actors of Nigeria descent were among those nominated for the 2020 Emmys. Apart from Yvonne Orji, Uzo Aduba and Jovan Adepo were also nominated. Like Yvonne, this is also Adepo’s first Emmys nomination for best supporting actor in “Watchmen.” This is however different for Uzo Aduba as she had been nominated three other times for her role in the movie, “Orange is the New Black,” which she had won twice.
A stand-up comedian before landing her role on the HBO hit, Yvonne returns to her roots some weeks back with a standup special, “Momma, I Made It”. A compelling mix of travelogue and belly laugh-inducing social commentary, the special showcases the full range of Orji’s talents. Raised in a close knit Nigerian family, Yvonne originally planned on being a doctor and has a master’s degree from George Washington University to prove it. Inspired to give comedy a try after entering a beauty pageant and having to settle on a skill for the talent portion, she incorporates aspects of her unique road to the entertainment industry into her act. While “Insecure” has become her calling card, it was comedy, not acting, that served as Yvonne’s entry into show business.

Born in Port Harcourt, Yvonne arrived as a young child with her family to the United States in 1989, eventually settling in Laurel, MD. She went on to earn multiple degrees at the George Washington University before giving standup a shot as a contestant in the Miss Nigeria in America pageant in 2006. She went on to perform in clubs in New York and Los Angeles and to open for the likes of Chris Rock. “You don’t get to be Nigerian and tell your parents you want to do comedy without getting a couple of degrees under your belt first,” Yvonne said recently.

For the 2020 Emmys Award, Uzo Aduba was nominated in the “Outstanding Supporting Actress in a Limited Series or Movie” category, for her standout performance as Shirley Chisholm, the first black woman to run for president, in the movie, “Mrs. America”. Aduba was born in Boston, Massachusetts, USA, as the daughter of Nigerian parents of Igbo origin in Anambra State, her full name being Uzoamaka Nwanneka Aduba.

Aduba grew up in Medfield, Massachusetts. She graduated from Medfield High School in 1999 and later attended Boston University, where she studied classical voice and competed in track and field, including the 55-meter dash and the 200-meter dash. She describes her family as a “sports family”. Her younger brother, Obi, played hockey at the University of Massachusetts and went on to play six seasons professionally. The acclaimed actress made her Broadway debut in 2007 as “Toby” in Coram Boy.

She went on to join the original revival cast of Godspell where she performed at Manhattan’s Circle in the Square Theater between 2011 and 2012. Aduba’s television debut came in 2012 when she played a nurse in the CBS drama, “Blue Bloods.” This makes her the first actress to win both a drama and comedy Emmy for the same role. In 2013, she began portraying Suzanne Warren, also known as “Crazy Eyes”, in the Netflix comedy-drama series Orange Is the New Black.

Aduba had won Outstanding Guest Actress in a Comedy Series at the 66th Primetime Creative Arts Emmy Awards in 2014 as well as Best Guest Performer in a Comedy Series at the 4th Critics’ Choice Television Awards. She won a second Primetime Emmy at the 67th Primetime Emmy Awards in 2015, winning the award for Outstanding Supporting Actress in a Drama Series. This makes her the first actress to win both a drama and comedy Emmys for the same role. After Orange Is the New Black ended, Aduba was cast as politician Shirley Chisholm in “Mrs. America.”

She co-starred opposite Lupita Nyong’o in the HBO Max upcoming miniseries “Americanah” written by Danai Gurira. She also co-starred in the upcoming romantic drama film, “Really Love.” Aduba began earning recognition for her acting in 2003, with a performance in Translations of Xhosa at the Olney Theatre Center for the Arts that earned her a Helen Hayes Award nomination for Best Supporting Actress in a Play.

For British-born actor of Nigerian and African-American descent, Jovan Adepo has had a momentous career in just a short period of time. His first television role was in the HBO series The Leftovers, a supernatural mystery drama. In 2016 he was thrust into the spotlight in Denzel Washington’s Oscar nominated film, “Fences.” In Fences, Adepo played Cory Maxson, the son of Washington’s Troy Maxson. Adepo recently starred in the HBO DC series Watchmen as the superhero Hooded Justice, as well as the Facebook series, Sorry For Your Loss, opposite Elizabeth Olsen, as her love interest.

He also co-starred in the second season of the Amazon series Jack Ryan, as a series regular. Adepo can next be seen leading the cast with Grace Van Patten in the independent feature, “The Violent Heart”, which was part of the 2020 Tribeca Film Festival premiere selection.

On his influences in film and his quickly unfolding career in Hollywood, he once remarked: “It was a dream come true. I can imagine any young aspiring actor working in this business, getting a job like that is something incredible. It was something I knew I was going to have to work really hard to earn.”

His first major screen effort was playing Michael Murphy in the HBO television series, The Leftovers, but his role in the Washington-directed drama film, Fences, is what endeared him to the world. Adepo is the grandson of the late Fatai Adepo, special adviser to former Nigerian President, Olusegun Obasanjo, on prison matters. He recently revealed that his grandfather always wanted to pursue the arts and aspired to have a stage career in England. “He never had the courage to actually pursue it full-time. I think that my grandfather’s parents thought that it wasn’t a formidable job to have. They wanted him to either get into politics – which he ultimately ended up doing, working for the Nigerian president – or to be a doctor or lawyer. Something that could create wealth for his family for years to come,” he told Interview Magazine.

The actor thought he would play professional football when he first got to college, especially after playing in high school but by his “second or third” year in college, he decided to change his career after being unable to get enough game time in the football team. He moved to Los Angeles, U.S. in 2011 after getting his bachelors in political science. In LA, he got into the entertainment industry, attended acting workshops and eventually met his “mentors” who pointed him in the right direction and helped fine tune his craft.