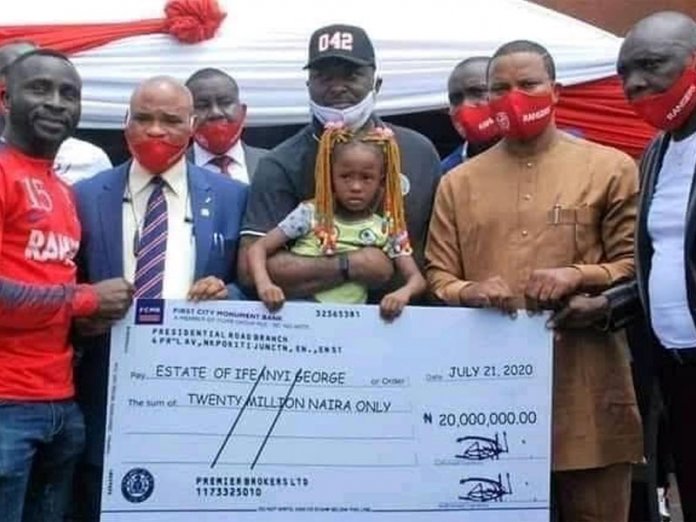 Enugu Rangers Football Club’s striker, George Ifeanyi Onwubiko was as of January this year alive, energetic and fit. He was playing for his club Enugu Rangers. With the abrupt outbreak of COVID-19 pandemic, the Nigerian Professional Football League (NPFL) 2019/2020 was suspended. Having been away from his family for long, the young Onwubiko in March decided to use the opportunity of the league suspension to travel and reunite with his family in Lagos.

Unfortunately and sadly, Onwubiko met his untimely demise in a ghastly auto crash at Abudu, Edo State on his way to Lagos.

His demise left his family, friends and relations heartbroken, helpless and devastated. To his team mates, Rangers management team and family members, it was a prime and one death too many.

This is not because George Onwubiko died young and suddenly, but because other Nigerian home based players, who died in active service were neither honoured, remembered nor their families taken care of after, not even by the government. That has been the case before now.

Such sudden death of Nigerian home-based players in active service have always left their immediate families sorrowing and suffering endlessly. Because of this, many Nigerians had expected that late George Onwubiko’s case won’t be different.

Afterall, Onwubiko was playing for a government owned-club, before his sudden demise. Besides, players of many government and individually-onwed football clubs in Nigeria were being owed sign-on fees, salaries and allowances.
So not many were expectant or optimistic of any lifeline or immediate relief for George Onwubiko’s family, not from government especially now that COVID-19 pandemic has made nonsense of every cash receipt projections.

But Enugu State Governor, Rt. Hon. Ifeanyi Ugwuanyi has once again shown that he is different, that he is a visionary leader with tact. He is the man who sees tomorrow and always plan ahead of time. That he is hardly taken or caught unawares, especially when it has to do with the welfare or wellbeing of the people.

This he demonstrated, when his government in 2017 approved and arranged life assurance cover package for Enugu Rangers players and officials of which George Ifeanyi Onwubiko was one of them. He did this without any inkling that any of the Rangers players will die soon. But he knows that death is inevitable for every human, especially for club players that are always on the move from one state to another to play league matches.

So with Onwubiko’s demise in March, his immediately family was provided with lifeline recently with the presentation of a cheque of N20m insurance package in Rangers Camp at Nkponkiti Road, Enugu in a sobered and emotional atmosphere by the Premier Brokers limited alongside Rangers management team and Enugu State Government functionaries. The event which took place on July 21, 2020 also coincided with Onwubiko’s posthumous birthday.

The sum represents the player’s life insurance policy which Enugu State Government led by Ugwuanyi, graciously approved for each player and official of Enugu Rangers.

Speaking at event, Enugu Rangers manager Prince Davidson Owumi thanked Gov. Ugwuanyi for his approval of the Insurance and subsequent renewals of the policy that started since 2017/2018 football season.

With this proactiveness, Ugwuanyi’s administration has not only motivated the Rangers players and officials to continue to put in their best in their assignments, he has shown and assured them that their future and that of their families are secured in the club and their commitment and industry to the success of the club can never be in vain.
The insurance package to late Onwubiko’s family which is first of its kind in the country’s professional league by a government to a deceased player will set a new standard in the hiring and management of players and officials in Nigerian National League.

It will spur and challenge local club owners in Nigeria, be it government, individual or organisation to emulate or follow the path of Enugu State Government by approving and packaging comprehensive life assurance cover for their players and officials. This will not help to improve the league, such will help to provide the needed succour or lifeline to the family and dependants of the players and officials of the clubs in case of eventuality or the unexpected happens.

If properly invested and managed, the N20million insurance package will not only keep late George Onwubiko family and dependants going and comfortable, it will lift them into the millionaires status in Nigeria.

This timely lifeline to a young, bereaved and depressed family of late Onwubiko by a visionary, proactive and compassionate leader, will remain evergreen in their family members’ memories and remain a reference point in the country’s football circle.