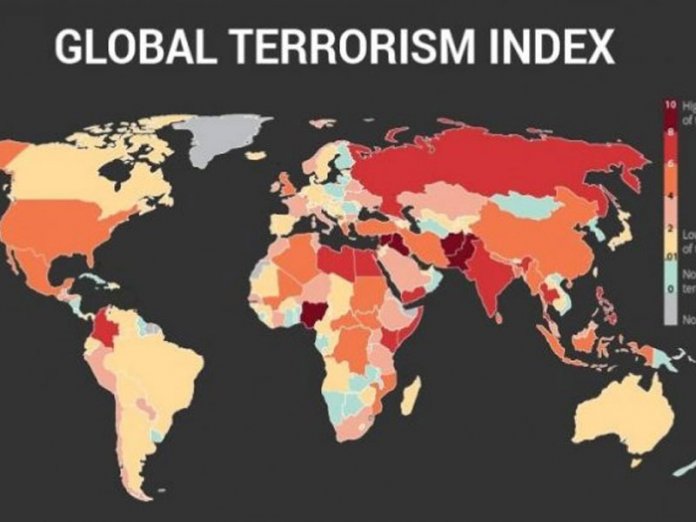 A new report, the Global Terrorism Index (GTI) has ranked Nigeria the third terrorism most impacted country in the world.

The report titled, ‘Global Terrorism Index 2019’, which was released last week measured the impact of terrorism across the world.

Only Afghanistan and Iraq which ranked first and second respectively were ahead of Nigeria as countries that suffered most from terrorism.
The report indicates that Nigeria remains the most terrorized country in Africa with huge economic and financial loss. It stated that deaths from terrorism in Nigeria rose to 2,040 in 2018, a 33 per cent increase.

Excerpts from the report read: “This increase follows a steady decline in deaths since 2014. Terror-related incidents increased 37 per cent, from 411 in 2017 to 562 in 2018. The increase was due to a substantial escalation of violence by Fulani extremists, whilst Boko Haram recorded a decline in deaths from terrorism.

“Violence between Nigerian herders and farmers intensified in early 2018 with approximately 300,000 people fleeing their homes.”
The report noted that with Sub-Saharan Africa recorded the second highest number of deaths from terrorism, overtaking the Middle East and North Africa (MENA), which is now ranked third.

According to the report, this marks the first year since the inception of the index that sub-Saharan Africa recorded more deaths than its neighbouring region.

It explained that the primary driver of the increase in terrorism in the region was a rise in terrorist activity in Nigeria, which was attributed to Fulani extremists.

The GTI 2019 states that Islamist group Boko Haram, formally known as Jama’tu Ahlis Sunna Lidda’awati wal-Jihad, continued to show a significant decline in terrorist activity since its peak in 2014.

“Despite this, Boko Haram ranked as the fourth deadliest terrorist group in 2018, and remains the deadliest in Sub-Saharan Africa,” it added.

The report said that since its rise in 2009, Boko Haram had been responsible for thousands of deaths throughout the Lake Chad Basin region of West Africa. It said: “The salafi-jihadi insurgency has led to 35,000 combat-related deaths and 18,000 deaths from terrorism since 2011, mainly in Nigeria.

“The group is most active in the north-eastern Nigerian state of Borno, but has also perpetrated attacks in Burkina Faso and Cameroon. “Boko Haram’s demographic profile is unique among terrorist groups in its unusually high proportions of women and children.10 Two-thirds of Boko Haram suicide attackers are female; of these, one in three are minors.”

The report observed that internal rifts led Boko Haram to split into multiple factions, that appeared relatively distinct.
However, the report noted that the fatality rate of Boko Haram attacks had fallen from 15 deaths per attack to four in the past five years.
Nevertheless, the report said that just like previous years, about 85 per cent of attacks in 2018 were in Nigeria. The report said that the Multinational Joint Task Forces (MNJTF), which operates in conjunction with the Nigerian military, had reclaimed territory from and significantly weakened Boko Haram in 2015 and 2016.

It however, noted that while the MNJTF had continued to claim military success over Boko Haram forces, Boko Haram was responsible for at least 615 combat-related deaths in the first eight months of 2019 alone.

It said: “In Nigeria, terrorist activity is dominated by Fulani extremists and Boko Haram. Together, they account for 78 per cent of terror-related incidents and 86 per cent of deaths from terrorism.

“The Fulani extremists do not constitute a single terrorist group. Certain deaths within the ongoing conflict between pastoralists and the nomadic Fulani have been categorised as terrorism and attributed to extremist elements within the Fulani. This categorisation is reflective of terrorism used as a tactic within an ongoing conflict.

“However, also active and not recorded as terrorist activity are pastoralist militias who target the Fulani, increasing the
likelihood of reprisals.”

The report noted that Boko Haram were less active in 2018 than previous years. It states that both terror-related deaths and incidents attributed to Boko Haram had steadily declined since peaking in 2014. It said: “In 2018, Boko Haram caused 589 deaths from terrorism, a 42 per cent decrease from the preceding year. Terror-related incidents declined by 35 per cent, from 222 in 2017 to 144 in 2018.”

Despite these improvements, however, the report states that Boko Haram still threatened regional stability and development.
The report put the total global economic impact of violence at $14.1 trillion for 2018, or 11.2 per cent of global GDP.

The report further declared that Nigeria, Somalia, Democratic Republic of the Congo (DRC), Mali, and Central African Republic (CAR) remained the countries most affected by terrorism, although all but Mali improved from 2017 to 2018.