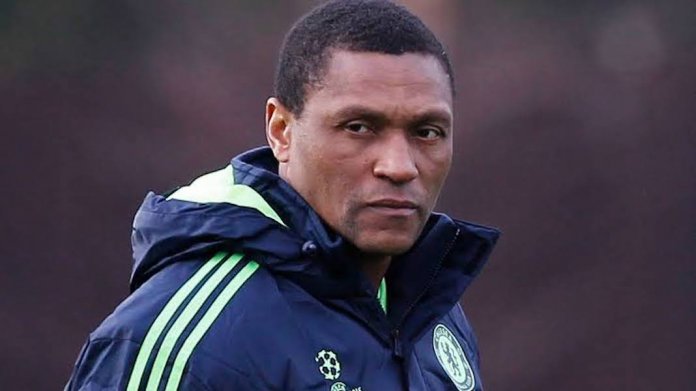 Former Super Eagles defender Michael Emenalo has opened up on the prejudice and hardship he faced while steering the ship of one of the world’s biggest football clubs, Chelsea.

After originally joining the Blues as chief scout, Emenalo progressed through the ranks to take a seat at the top table as Technical Director, overseeing Chelsea’s crucial matters and developing the club’s youth system which can be seen bearing fruit today.

Yet Emenalo feels “the narrative that white is good has to change,” he revealed in an exclusive interview with UK’s The Guardian, while documenting for the first time the extent of some of the discriminations he faced.

Emenalo admits it was incredibly difficult holding such a high position yet wanting to speak out more on race related issues, with an expectance placed on him to become something of an activist.

Yet even at the start of his Chelsea reign, Emenalo revealed the shocking extent of the scepticism that met his appointment.

“Some people said: “Why did this Russian owner, who knows thousands and thousands of people, confide in him? He’s African so he must have killed somebody for the owner.’” No one stopped to think it could possibly be because of my intellect or experience,” Emenalo recalled.

“When I was appointed (as technical director) some journalists didn’t think I spoke English. They said I had never played the game.”

This, of course, was far from true. Emenalo won 14 caps for Nigeria and marked Diego Maradona and Gabriel Batistuta in the 1994 World Cup. He was named as one of the side’s stand-out performers at the tournament.

Emenalo went on to work with some of the world’s most high profile managers, and happened to be responsible for giving several of them marching orders on multiple occasions.

Yet although he gained more experience as the seasons passed by, Chelsea’s former technical director always felt like he had that little bit more to prove.

“Everybody has a misconception of my knowledge, insight and experience. I did it 10 times with 10 managers,” said Emenalo.

“Each time I climbed the hill and convinced them of my worth. I have a university degree in international relations and diplomacy. I know how to deal with people and with situations. I had World Cup experience and been part of this industry on five continents,” he outlined.

“I said: “I’ll give them an opportunity to understand me.” They all did but it’s not easy starting from ground zero every time.”

Following the defeat by Manchester United in the 2008 Champions League final, Emenalo admitted he was ready to walk away from the club after Avram Grant was let go. It was only Grant’s words, where he outlined how much Abramovich respected Emenalo, that saw him remain in west London.

Grant spoke to Abramovich in his departing meeting, and sought assurance that Emenalo would be ‘relevant.’

Abramovich, it is said, was already of the mindset that the Nigerian would play a commanding role for Chelsea as the club sought to conquer the European stage.

Emenalo was present in Munich when Chelsea finally achieved their dream in 2012, beating Bayern in the Champions League final upon their own turf.

He departed Chelsea in November 2017, after becoming exhausted in his role and decided to take a break. Such was his record, however, that Monaco wasted no time in acquiring his services.

Emenalo left Stamford Bridge having taken pride in placing huge emphasis on the academy system – something which has now blossomed on a vast scale with the emergence of the likes of first team stars Mason Mount, Tammy Abraham and Ruben Loftus-Cheek.

Having left Monaco following a difficult spell in which the club dropped to the bottom of Ligue 1, Emenalo is hopeful of a Premier League return in the near future. He does, however, feels attitudes on race desperately have to change soon.

He added: “There’s always someone saying a white guy can do it better. People need to do the right thing.”

UNDERSTANDING WHY GENDER EQUALITY IS IMPORTANT