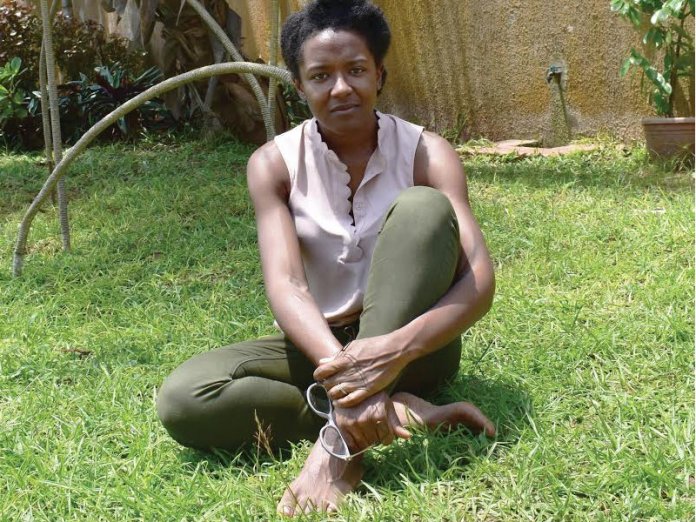 “Giocherai nel Quotidiano, Correndo”? That’s Italian for: You Will Play in the Everyday, Running. If an aficionado of her works discerns a yearning for movement in these words, which Temitayo Ogunbiyi chose as the title for her remotely-executed project, it is because it has always been the theme song of her studio practice.

But, of course, these words allude to the playground project, which was commissioned during the lockdown by the Italy-based contemporary art museum, Museo Madre. And the Museo Madre, which by the way is the more popular name for the Museo d’Arte Contemporanea Donnaregina, is housed in the Palazzo Donnaregina in the southern Italian city of Naples and was opened in 2005.

Talking about playgrounds, the 2011 Columbia University MA holder has been enamoured with the concept since 2018. This was when she built her first functional playground through the appropriation of construction materials and conventional household items. Apparently, it was at the second Lagos Biennial of Contemporary Art – held between October 26 and November 23, 2019 – that her installation “You Will Find Playgrounds among Palm Trees” caught the attention of Kathryn Weir, the current artistic director of the Museo Madre, who eventually commissioned her latest playground project.

“With this project, my thought was to create a space that could accommodate socially-distanced play,” she explains. “For this reason, the play bars of this installation are organised in clusters with a few bars. This is a departure from previous works, where there were larger numbers of bars intertwined, even entangled.”
Her earlier works had been conceived to get families to mingle with other families. But this current work, which was opened for public use on Wednesday, July 8, factors in the current realities and is designed to make families play in isolation even while sharing the same play space with other families.

Beyond these considerations, the artwork is conceptually an attempt to represent a link between Lagos and Naples. “The playground incorporates Google Map lines that connect the two cities by road,” Ogunbiyi continues. “I also created a garden, in the play space. The featured plants grow in Lagos and Naples. MOE+ Architects, in Lagos, helped me to generate the first set of renderings.”

Curiously, not even the fact that she had to execute the project remotely from her base in Lagos impeded its progress and its eventual completion. “Using available tech platforms, and with the support of Museo Madre and Fonderia Nolana, it was surprisingly easy to convey and execute my ideas remotely,” she says. “While I feel the piece could have been slightly different had I been in Naples, the outcome is very much in line with my vision for the project. And I have been pleasantly surprised to see how children have creatively engaged with this project.”

The 36-year-old Nigerian-American artist, who in the course of her career had hopscotched between drawing, painting, sculpture and installation, was egged on to “create interactive sculptures that collapse the divide between fine art and play spaces” by Stephanie Baptist’s press release for an exhibition, held at Medium Tings – the latter’s gallery in Brooklyn, New York – in 2017. In that press release, Baptist had written: “A curious observer of the world around her, Ogunbiyi crafts forms that indirectly suggest the need for protective spaces that nurture.”

Thus, Ogunbiyi lunged into executing her first playground structure in 2018 and eventually creating three functional playgrounds to date. These, according to her, “largely respond to my works on paper, which combine botanicals and hairstyles.”

The artist, whose works have featured in exhibitions held at the Pulitzer Foundation for the Arts, the Centre for Contemporary Art Lagos, the Museum of Contemporary African Diasporan Arts (Brooklyn, NYC), Perm Art Museum, the Dom Umenia (in Bratislava, Slovakia), a curatorial publication for the 10th Berlin Biennale, Berlin Art Projects, the Fries Museum in Berlin, and most recently at the Lagos Biennial, is known for using her art to explore the relationship between the environment, line, and representation. Evident in her works is the attempt to respond to and forge dialogues between global current events, anthropological histories and botanical cultures. “Systems that capture, mediate, and direct the movement of people and matter is a recurring subject of investigation in her practice,” corroborates her biographical statement.

Back to the Naples playground project, the recipient of numerous fellowships and awards – including a Smithsonian Artist in Research Fellowship and a Ford Foundation Fellowship – enthuses about the museum’s strategic location. “I believe the location of the museum is a meeting point of three communities in Naples. The idea was that the project could provide an inviting space for families, at the museum, following an intense lockdown. With the accompanying workshop that I designed, the hope is to reintegrate people from the museum community into life outside of their homes and perhaps position the museum as an inviting place for children and families. The bases of the bars in the sculpture make reference to culinary traditions in the Campania region, of which the museum is a part.”

The project, which will remain on view up to early November, hopes to serve as a building-block towards reconfiguring play as social justice, and a form of education that can develop more tolerant, cooperative and sensitised human beings. “I believe that this project may serve as an important milestone,” Ogunbiyi says.

On the challenges of working on a project intended for a local community in as a foreigner, she says: “I found that as a foreigner, embarking on this project with little knowledge of the local culture, it was easier for me to find value in what is available locally, especially because much of what I encountered was new to me. At the same time, I enjoyed integrating my memories of Lagos – histories of threaded hairstyles and plants, with these Italian references. In the end, I learned quite a bit and hope that I was able to begin a dialogue between these two cities.”

Asides the remote execution of the project, the lockdown period, which spanned the whole of April, found Ogunbiyi spending quality time with her family and neighbours. “I feel accomplished having gotten my kids to do the better part of their school work!” she recalls. “I also started what is now a lush indoor/outdoor garden at home and it brings me, my family, and my neighbours so much joy. This has been wonderful for my botanical research as well. I’ve also continued to work as Head of Curatorial at ART X Lagos while working in the studio to create drawings, paintings and sculpture.”

As the figures of the coronavirus pandemic cases have experienced a spike, the artist would rather look forward in hope and determination than draw any conclusion on its possible impact.