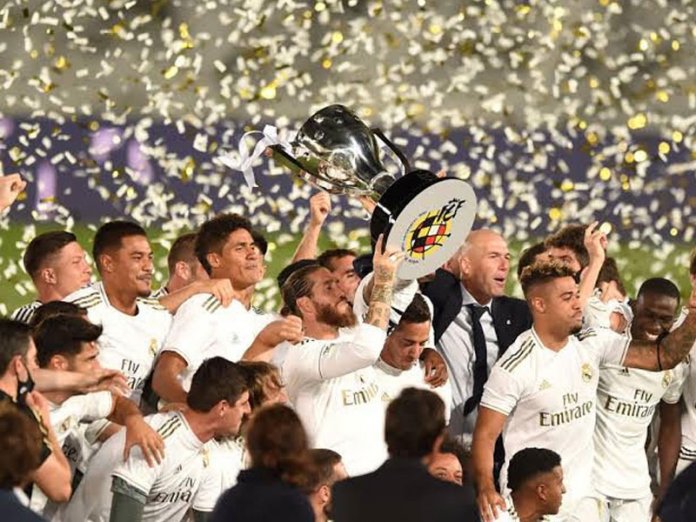 Real Madrid won their first La Liga title in three years with a game to spare as they edged 2-1 past Villarreal at an empty Alfredo Di Stefano Stadium.

Karim Benzema fired between the legs of Sergio Asenjo and added a controversial second from a retaken penalty.

In bizarre fashion, Sergio Ramos had rolled the first attempt for Benzema to smash in but the effort was disallowed.

Vicente Iborra pulled one back but it mattered little to Real as the club wrapped up their 34th Spanish title.

Zinedine Zidane’s side have won all 10 of their matches since Spanish football restarted in June.

They head into the final day of the season with an unassailable seven-point lead over second-placed Barcelona.

Behind closed doors in a 6,000-seat stadium at the club’s training complex is perhaps not the stage for the grand crowning Real would have imagined for their first title since 2017.

But that did not stop Zidane’s squad pulling on shirts with “Campeones 34” printed on the back before lifting the trophy in celebration as ticker tape fell over the pitch.

“Today is one of the best days for me as a professional,” said Zidane. “After everything that happened, the three-month break, it is fantastic what has been achieved.

“It is strange for everyone. We cannot control the situation. We would have loved to be with the supporters, and hopefully that can happen down the line.”

La Liga titles have been in shorter supply than Champions League triumphs for Real this decade, with this only their third in the past nine seasons.

They won three successive European Cups in Zidane’s first tenure but had recorded successive third-place finishes since their previous domestic title, as Barcelona were crowned champions.