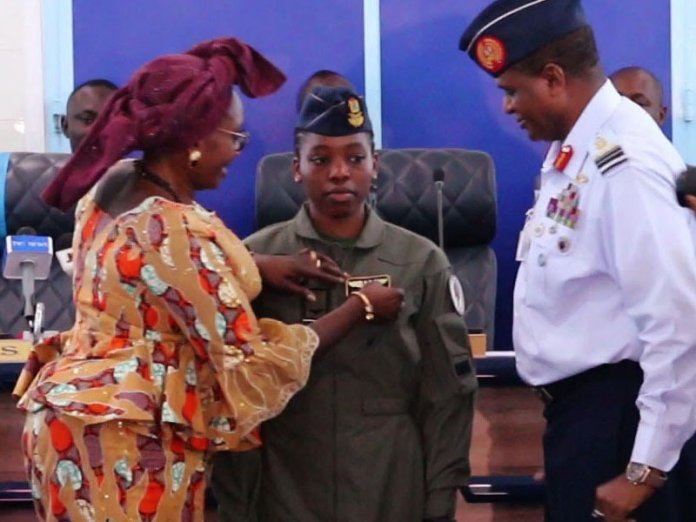 Chiemelie Ezeobi writes that the recent death of Flying Officer Tolulope Arotile, Nigeria’s first ever female combat helicopter pilot, who continuously escaped enemy fire during her combat operations against banditry in the North-central, only to die in a freak road accident in Kaduna, has defied logic

The death of Flying Officer Tolulope Arotile, Nigeria’s first ever female combat helicopter pilot, is the stuff ironies are made of- she had successfully evaded death as bandits shot at her aircraft during one of her recent operations, only to die in a freak accident inside the Nigerian Air Force (NAF) Base in Kaduna on Tuesday, July 14.

She had just come back from Operation GAMA AIKI in Minna, Niger State, where she was deployed in the fight to rid the North-central states of armed bandits and other criminal elements by flying several combat missions.

Ironically, in one of her most recent operations, she was targeted by the bandits who shot repeatedly at her aircraft but the dogged fighter engaged her combat skills and evaded them, while successfully carrying out what she was deployed for.

It was on her return to the NAF base in Kaduna with her pass that an excited excited former Air Force Secondary School classmate saw her strolling and reversed his car to greet her, a move that proved fatal as his car pushed her down and squished part of her head.

Although she was rushed to the hospital immediately, she was pronounced dead on arrival. She was only aged 24.

Arotile loved to fly-that was truly one of the things she was passionate about, little wonder she aced her courses as the best flight student from the NAF Academy, which qualified her for the helicopter training she received in South Africa.

In an exclusive interview this reporter had with the deceased on October 15, 2019, after she was winged at NAF headquarters in Abuja, her passion for flying was contagious and showed none of the grueling hours and pain it took to gain her license.

“Throughout my training I have always looked towards flying. The major thing I have come to realise in my field is that there is just no break in my career, you just have to keep pushing and doing your best.

NAF Director of Public Relations and Information, Air Commodore Ibikunle Daramola said until her death, Arotile, who was commissioned into the NAF in September 2017 as a member of Nigerian Defence Academy Regular Course 64, was the first ever female combat helicopter pilot in the service.‬

He said: “During her short but impactful stay in the service, late Arotile, who hails from Iffe in Ijumu Local Government Area of Kogi State, contributed significantly to the efforts to rid the North Central States of armed bandits and other criminal elements by flying several combat missions under Operation GAMA AIKI in Minna, Niger State.

“The Chief of the Air Staff, Air Marshal Sadique Abubakar, on behalf officers, airmen, airwomen and civilian staff of the NAF, commiserates with the family of late ‪Flying Officer Arotile‬ over this irreparable loss. We pray that the Almighty God grants her soul eternal rest.”

According to the DOPRI, she has “gone too soon like a candle in the wind, and she will be greatly missed by the entire Nigerian Air Force family”.

The CAS in his statement said he was heartbroken by the incident, just as he described her as “one of our shining young stars”.

In a statement on Wednesday, Abubakar said Arotile was “a very intelligent, disciplined, confident and courageous young officer who added value wherever she served.”

He added, “as a squadron pilot in Operation GAMA AIKI in Minna, Niger State, she flew her quota of anti-banditry combat missions to ensure a safer, more secured Nigeria.”

President Muhammadu Buhari has commiserated with the family of the late Flying Officer Tolulope Arotile.

The president in a statement on Wednesday signed by his Special Adviser on Media and Publicity, Femi Adesina, extolled the virtues of the first female combat helicopter pilot in the history of the Nigerian Air Force.

The statement read, “President Muhammadu Buhari received with deep pain the passing of Flying Officer, Tolulope Arotile, condoling with the family on loss of such a promising officer, whose short stay on earth impacted greatly on the nation, especially in peace and security.

“The President salutes Arotile’s bravery in the field to protect the country from onslaught of bandits and terrorists, assuring that her memory will be indelible, and her efforts remembered.

“President Buhari commiserates with the Nigerian Air Force, airmen, airwomen and all friends of the deceased, recalling her deft skills in manoeuvring combat helicopters, which he had physically witnessed with pride.

“The President sympathises with government and people of Kogi State on the loss. President Buhari prays that the Almighty God will receive the soul of the departed, and comfort the family she left behind.”

Also mourning her was

State, who described her death as

In a condolence message by the Governor’s Chief Press Secretary, Onogwu Muhammed, Bello said the death is a national disaster, saying she was a fantastic aviator.

”It was with great sorrow and shock that I received the news about the passing of Flying Officer Tolulope Arotile, the first female combat Helicopter Pilot in the history of the Nigerian Airforce,” the statement added.

“Late Flying Officer Arotile brought the country to a standstill on October 15, 2019 when she was decorated as the first female combat Helicopter Pilot. This was a huge honour to her family and state, the nation, and the entire women in the country and beyond.”

Governor Bello said the late Arotile combined professionalism and patriotism in the discharge of her duties and was instrumental to Nigeria’s fight against banditry and other criminal activities especially in the North Central region.

“We are devastated by the tragic death of this young promising lady who took bravery to the next level, demystified prejudicial stereotype and flew her parents, state and nation high in honour and professionalism,” he added.

He stated that “at the age of 23, late Arotile has woven her own story into the Nigerian Folklore as a patriot who died in defence of her nation. On behalf of the state, I commiserate with the family of late ‪Flying Officer Arotile‬ over this irreparable loss and I pray that the Almighty God grants her soul eternal rest, She will be sorely missed.”

Also condoling the family, President of the Senate, Ahmad Lawan, expressed shock and sadness at the tragic death.

The Senate President noted the attestation of the Nigeria Airforce that Arotile flew several combat missions and made remarkable contributions to the military efforts against banditry and other criminal activities particularly in the North Central states.

Noting that Arotile was a role model for young women and the Nigerian youths in general with her focus and dedication to service and calling, he condoled with the family of the deceased, CAS, her officer colleagues, other airmen and airwomen, as well as the government and people of Kogi State.

Also, the Speaker of the House or Reps, Femi Gbajabiamila wrote on his Twitter page, “I received with great shock the death of our country’s first female combat pilot, Tolulope Arotile, I saw her months ago display her talent to the admiration of many of us at a @NigAirForce event. Indeed we have lost a great talent! My condolences to the Arotile family and N.A.F.”

For the first time in the history of the Armed Forces, value beyond desk jobs (manning the schools and hospitals etc) have been emplaced on its female personnel, thus breaking the mould of gender discrimination. Championing this laudable feat is the Nigerian Air Force (NAF) as it has engaged its female personnel to operational and combatant roles.

NAF had seven female pilots who have distinguished themselves in a field often seen as the exclusive preserve of their male counterparts, but with Arotile’s untimely and bizarre death, the flanks have been reduced to six.

These seven female pilots have proven to be a new breed of high flyers whose passion push them to soar the skies in service to nation and mankind. The feat has again reinforced the fact that their dreams remain valid as they are nurtured and also harnessed for greater heights. With Arotile’s death, things might never be the same again but soldier on they must.

Biography
Born on December 13, 1995 to the family of Mr and Mrs Akintunde Arotile in Kaduna, Arotile hails from Ijumu Local Government Area of Kogi State.

Arotile was commissioned into the Nigerian Air Force as a Pilot Officer on September 16, 2017 and holds a Bachelor of Science in Mathematics from the Nigerian Defence Academy.

She was winged as the first ever female combat helicopter pilot in the Nigerian Air Force on October 15, 2019, after completing her flying training in South Africa.

She held a commercial pilot license and also underwent tactical flying training on the Agusta 109 Power Attack Helicopter in Italy.

Incidentally, she introduced the newly acquired Agusta 109 Power Attack Helicopter to the President, Commander-in-Chief of the Armed Forces of Nigeria, President Muhammadu Buhari, during the induction ceremony at Eagle Square in Abuja on February 6, 2020.

Before her untimely death, she made significant and outstanding contributions to the war against terrorism, armed banditry and other forms of criminality in the country, flying several combat missions.