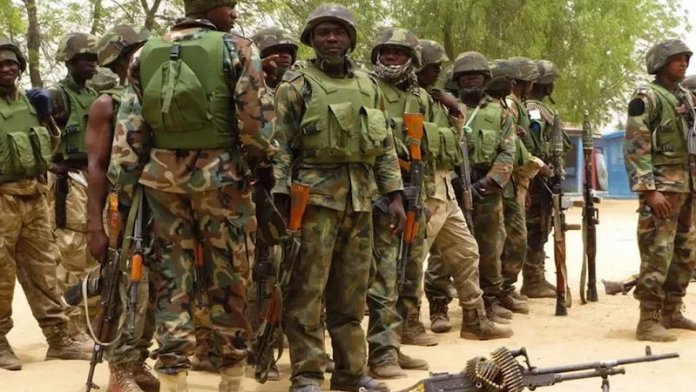 A group known as the Central Force Against Fakenews (CFAF), which is dedicated to fact-checking security issues in Nigeria, has dismissed the report, which alleged that 350 personnel are set to leave the Nigerian Armed Forces as a cheap propaganda.

The President of the CFAF, Mr. Aminu Bisku, said that the group’s application of modern tools on information fact checks, has established that the report was sponsored by terrorist organisations operating in the Northeast to weaken Nigerian troops that had been under intense heat in the past three months.

The CFAF added that the logic behind the information failed to appeal common sense and could not stand the slightest scrutiny.

The report, which was carried by an online medium, claimed that 350 military personnel wanted to quit for “loss of interest” in military service.

However, Bisku has rubbished the report and stated that all the claims in the story could be punctured easily because 350 military personnel would not cite the same reason for leaving an organisation.

“People leave organisations for different reasons as they view developments differently, but it is almost impossible for hundreds of people to want to leave an organisation for the same reason,” he said.

Bisku said that the only way 350 independent-minded persons could arrive at the same conclusion on an issue at the same time is for them to be put in a classroom and tutored how to write their retirement letters.

He also argued that the roundness in the figure did not conform to reality and explained that propaganda pieces as they relate to claims in figures could easily be punctured by the recourse to have an eye-catching sun, whereas real-life spontaneous reactions such as resignations hardly conform to any pattern that would comfortably fall in a round pattern.

The President of the CFAF said: “Remember the 350 were not said to have been shortlisted for retirement but were said to have acted on their own. So it would have been difficult to arrive at a round figure as the one in the report.

“It would have been believable if they had said 218 or 341 or any such accidental figures but for a voluntary independent action to stop at a round figure of 350! You know that some people are trying to be mischievous. And because the sponsors of the story have a mindset that was how they came up with a round figure of 350.”

The CFAF also doubted the coincidence that such propaganda was released at the time the insurgents were being killed in large numbers.

“The timing of the report should make you wonder. Why is it coming at a time when the insurgents are under heat?

“If our troops did not resign when they were going into tactical withdrawal and running to other countries, then it would be stupid for anyone to believe that they will resign now that the heat is against the terrorists,” the group stated.

The CFAF claimed to be aware that in the past three months, the military has killed nearly 2,000 insurgents in both the Northeast and Northwest regions and the service chiefs have been at the theatres of operation, which represented the highest form of confidence-building to the troops.

“So for anybody to tell you that it is within such a time that our gallant personnel would be leaving is the highest form of deceit,” he added.

CFAF also said that much have been done to improve the welfare of military personnel that any consideration to quit the service now would be ill-advised.

The CFAF president said that the military has acquired modern sophisticated weapons that made troops battle-ready and excited to go to the battlefield.